The third person perspective is finally up and running in a respectable manner.

(I originally wrote this update in third person, but it was too obnoxious)

First, I would like to address the game requirements. Currently I’m developing with the Orange Box code base, but it runs on the Source SDK Base 2007. I’m honestly not sure about the implications of that: I have an Orange Box game, but those who don’t may still be able to run it. If someone could confirm this I would appreciate it. I don’t know of any obstacles of preventing this being made for the Source SDK Base in the future.

It’s been about two weeks since my last update, but the time has been well spent. I’ve been fighting with the Source’s animation system, until I finally discovered that most of the code I wanted (that would support Counter-Strike: Source style models) was split between a couple of unused files in the original source, and some SDK starter files not included in the project at all. The main difference between HL2 and CS:S style animations is that the CS:S ones are split between the lower and upper body. As you might imagine, there are a lot fewer lower body animation sequences then there are upper (nearly one for each weapon). Although more efficient, the programmer is then tasked with blending the layers together to form the final animation. If anybody is interested in technical aspect of this, I’m happy to provide more details.

There’s a lot more work that needs to be done before third person is finished, including moving the camera, modifying the control system, and redoing the box view that I worked so hard on. Here’s a few pictures of what I’ve got so far, there are a few more in the media section. 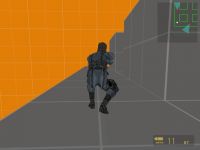 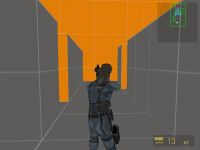 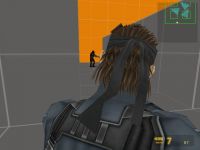 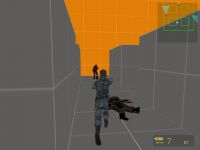 Looks like a pretty promising project. Keep it up, but don't forget about first person and external cameras. Are you trying to replicate MGS4 style of controls?

latest SDk has built in 3rd person code. If its a FP mod, just make a MP mod, and copy the code over.

This made me LOL. Good job though, the code included in source sucks. Useless when it comes to aiming.

No offence, but it just looks like you put the thirdperson command into the console, which works for all source based games.

that would be awesome if finally somebody made a mod thatwould have the cam above the player instead of behind, so the model didn't block the view.