Updates on the upcoming December release and the Christmas Cheer giveaway. 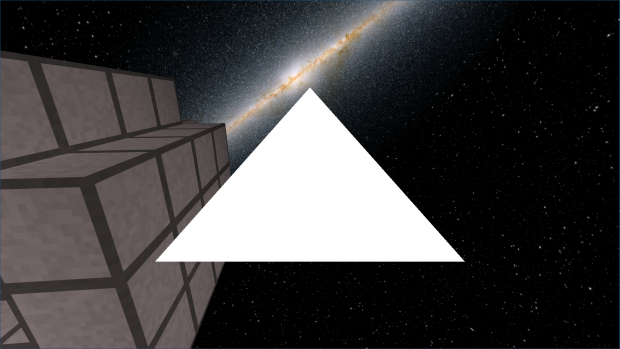 Sometimes the most boring of images can hide a lot of exciting developments.

For example, although a static image can't capture it, both the player and the ship to the left are traveling at slightly different speeds relative to the solar system they're in. So both ship movement and solar systems are at least partially implemented.

The ugly white triangle in the center is the first 2D object using new-style rendering I've been able to produce. Switching to this new style of 2D rendering will help performance issues for some rare people, but more importantly allow the game to function on the open source linux drivers and Mac OSX. 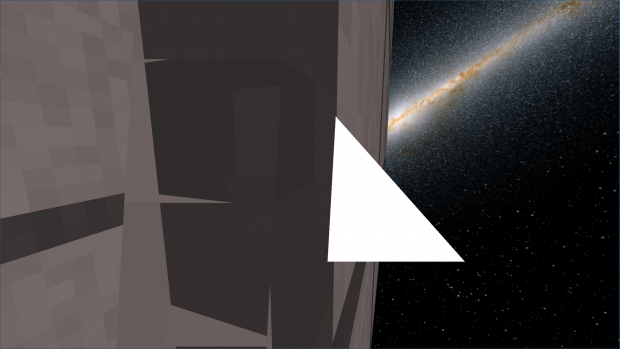 Of course, there's still a few problems to solve. The object detection clearly has issues with the new code - We're embedded in a block! And I'm not entirely sure why the 2D triangle is rendering behind some of the voxels, I'll need to sort that one out too.

In other news, the holiday cheer contest is going along swimmingly - Over 80% of the codes we're giving out are already spoken for! I was down with the flu for most this week so there's a large backlog, but I should be giving out keys en-masse this weekend - Just in time for Christmas! I'll write up a postmortem article about it next Friday, summarizing what I learned.

Between sickness, moving preparations, and holidays, my release schedule has definitely suffered - I've definitely missed my usual 15th of the month release. Still, the features I'm working on are exciting, and we're still aiming to have something out in December - Look for it around the 31st!

This is the most excited I've ever been about an ugly 2D white triangle and objects moving relative to each other in a game! :D Congrats on the milestones, Dirk - there are many more to come.

anything that has mass has its own gravity field and reacts to a gravity field.
how does earth know sun is there? general reativity gave us the answer and it all has to do with space time.fabric of everything in univers exist. and anything with mass warps it. it like heavy ball on sheet of rubber, the sun the stars and earth does the same thing bends fabric of space time so anything inside smaller goes towards it. explanes why moon orbits earth, and its speed of their orbits that stop moon falling into earth

because they are going speeds relative to us

but speed of light is different

if you were going 99.9 % speed of light
say if you took a journey that seems to take 20 years
you will come back to earth thousands of of years into future.

speed of light is constant but time is relative to observer

: The laws of physics don’t change, even for objects moving in inertial (constant speed) frames of reference.