Of all the RTW with BI expansion events, perhaps none can be more daunting than horde invasion, such as the RTW/BI's depiction of Hun's invasion of Europe, whereby, the RTW/BI would muster thousands upon thousands of Hunnish Horde troops attack a faction seemed helpless to muster any defense against such terror. This document describes how Horde Feature is implemented in the Amazons: Total War mod, its devastating hidden secrets, and how to defeat it.

There you are, in the RTW/BI expansion, watching the enemy in horde mode, moving into the battle position with units after units of horse archers and heavy cavalry against your pitifully small army, and looking beyond the battlefield horizon there are multiple stacks of seemingly never ending enemy reinforcement streaming in, waiting there, just in case you are lucky enough to fight the towering enemy force you are facing into a standstill, the rest of the horde will make sure they can beat your army into a pulp...

Wait, that was in the vanilla RTW Barbarian Invasion expansion, in Amazons: Total War, there is a hidden but even more insidious twist. the development team literally wants the real horde faction in the game, so instead of thousands upon thousands of horse archers and heavy cavalry, Amazons: Total War mod has hundreds upon hundreds of horde wagons, yes, those poor farmers, peasants, ex-landowners forced out of their homes, women, children, dogs, and all, and they are now homeless and down to their last resort using their wagons as their residence on wheels. Downtown Ghetto in Los Angeles cannot be worse than this.

Sounds innocuous, or even miserable?

Until you look into these units' battle stats, you would realize, if a regular spearman is a foot soldier in the early 20th Century, each small horde wagon is an equivalent of a WWII tankette (machine gun tank, or scout tank), and the heavier, larger war wagons are really heavy tanks with long range missiles. Whether it is a tankette or a heavy tank, both have one thing in common, they can mow down (literally run over) enemy infantry and cavalry like my cat munches up the entire tray of crab cakes, which is in a blink of an eye. One other thing they both have in common: because they are wagons, each "tank" has 4-5 times more missile reloads than any of your archers or other missile troops, mounted or on foot. And wagons big or small are stuffed with archers and/or ballistas, which out-range yours. Other than being slower than a vanilla RTW chariot, compares to the vanilla chariot, the small horde wagon has protection all around, and shooting ports on all sides with archers posted at each port. 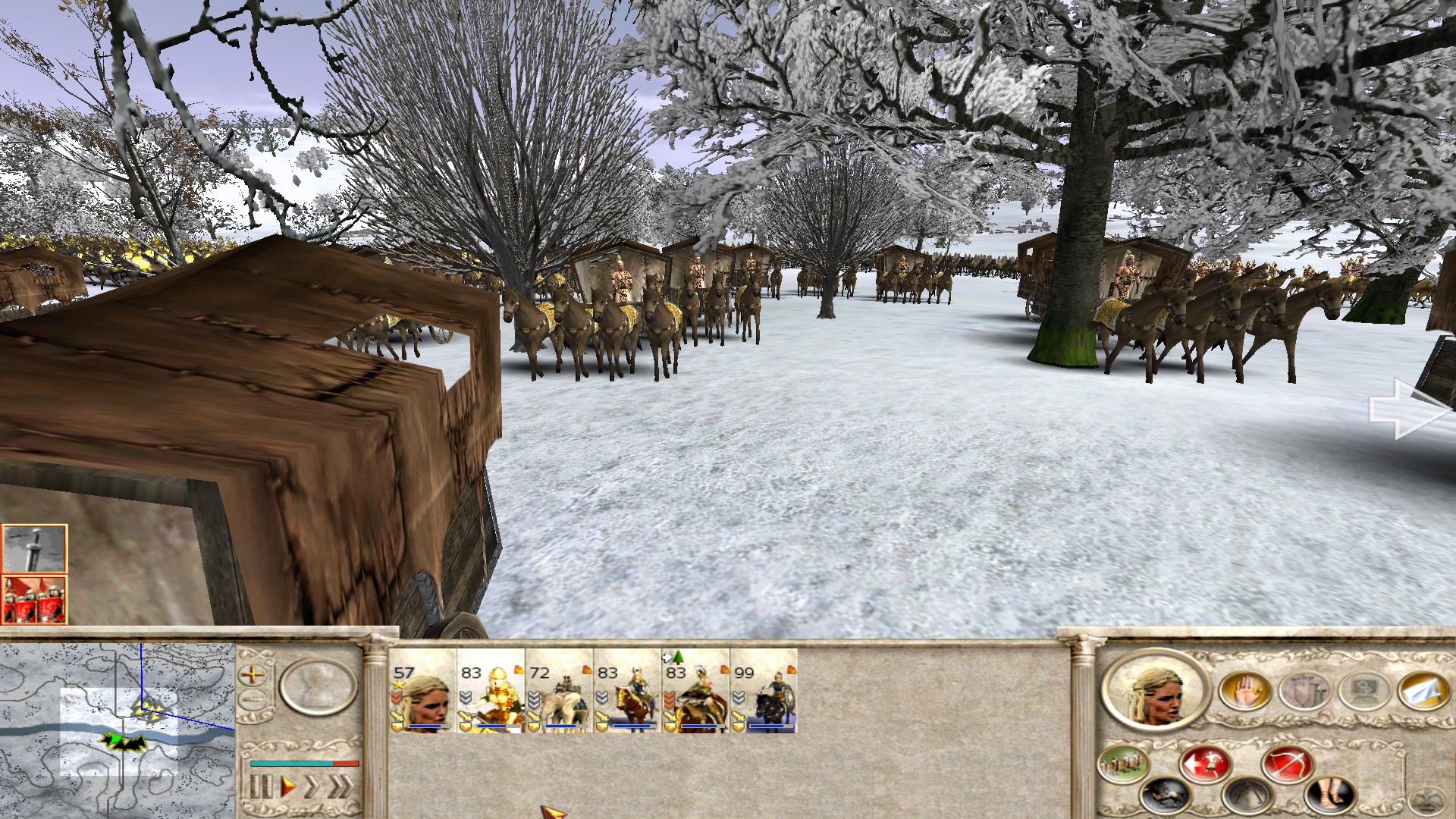 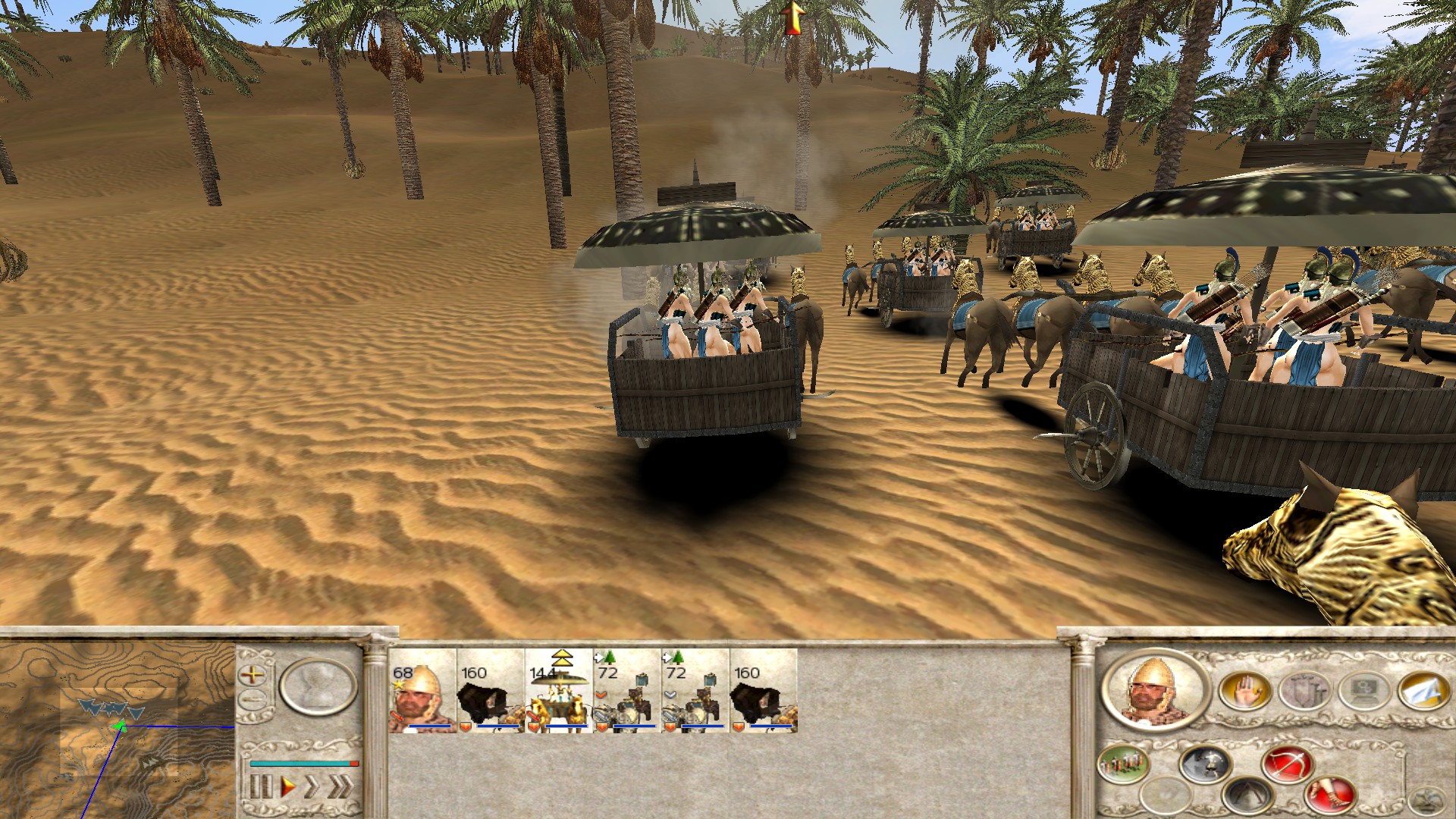 Fig.2 - Horde Heavy War Wagons, notice the armors on the horses and the sickle blades on the wheels

Not fair, you said? Well, they got bigger cart than yours. So, Sorry! We have to be realistic to let them carry more missile troops with more ammos and with more protection. As a matter of fact, the horde mode in Amazons-TW basically turned a helpless faction that just lost their last homeland into a Panzer Army worth of 4 or 5 divisions of tanks. And also, in the Amazons: Total War mod, 13 out of 18 factions can horde, each time with the similar type of wagon unit disposition. For some of the poor factions located in more desolate places, in some scenarios their only chance at world domination is to abandon their last province (yes, you can do that in Amazons-TW too) and to form a wandering nation of people, Almost exactly like Hunnish Invasion in RTW/BI, except with Panzer divisions. [snapshot below is a single heavy wagon unit outflanked and then charged an entire field army of 3,500 including elite as well as heavy cavalry units.] 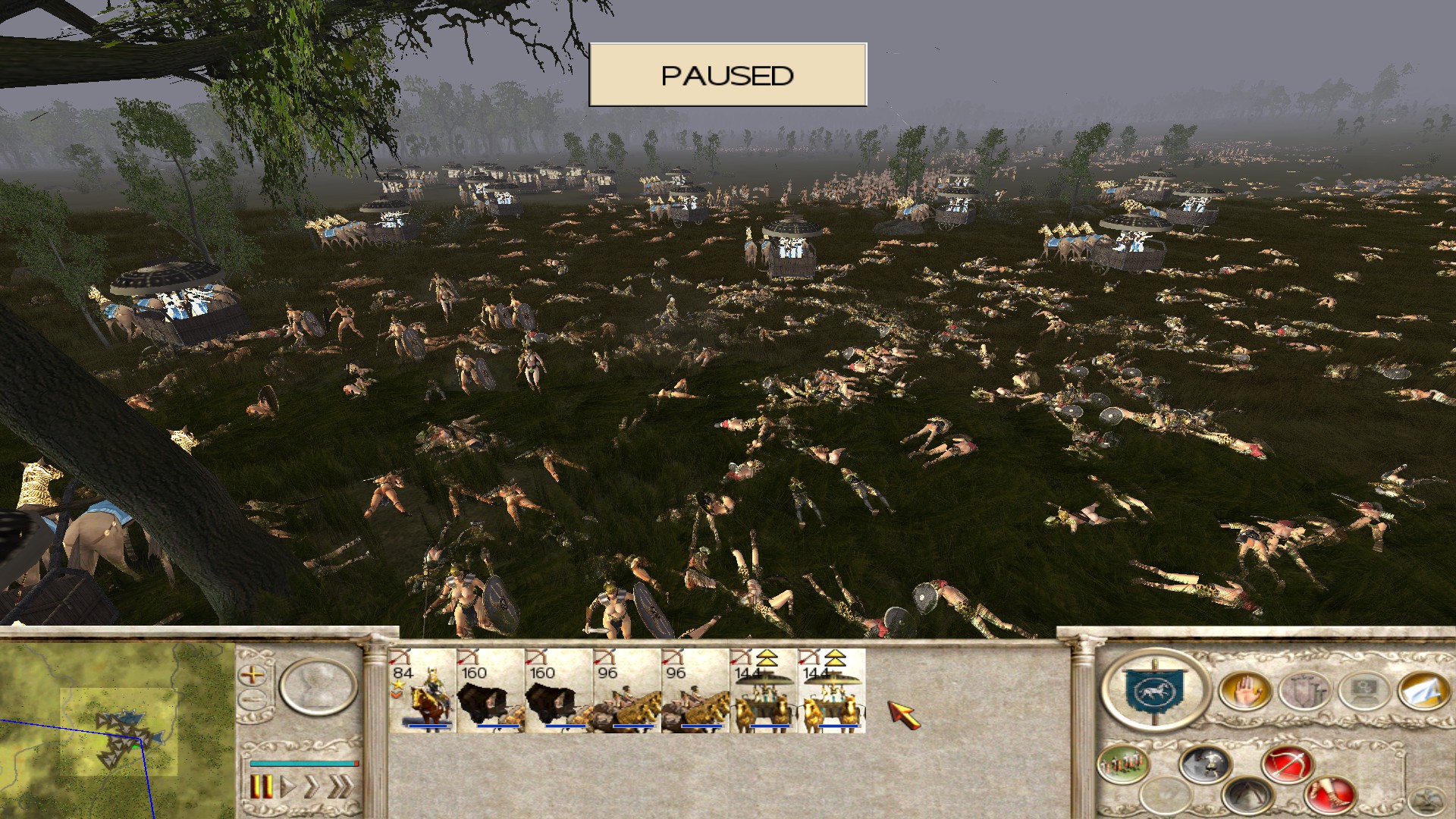 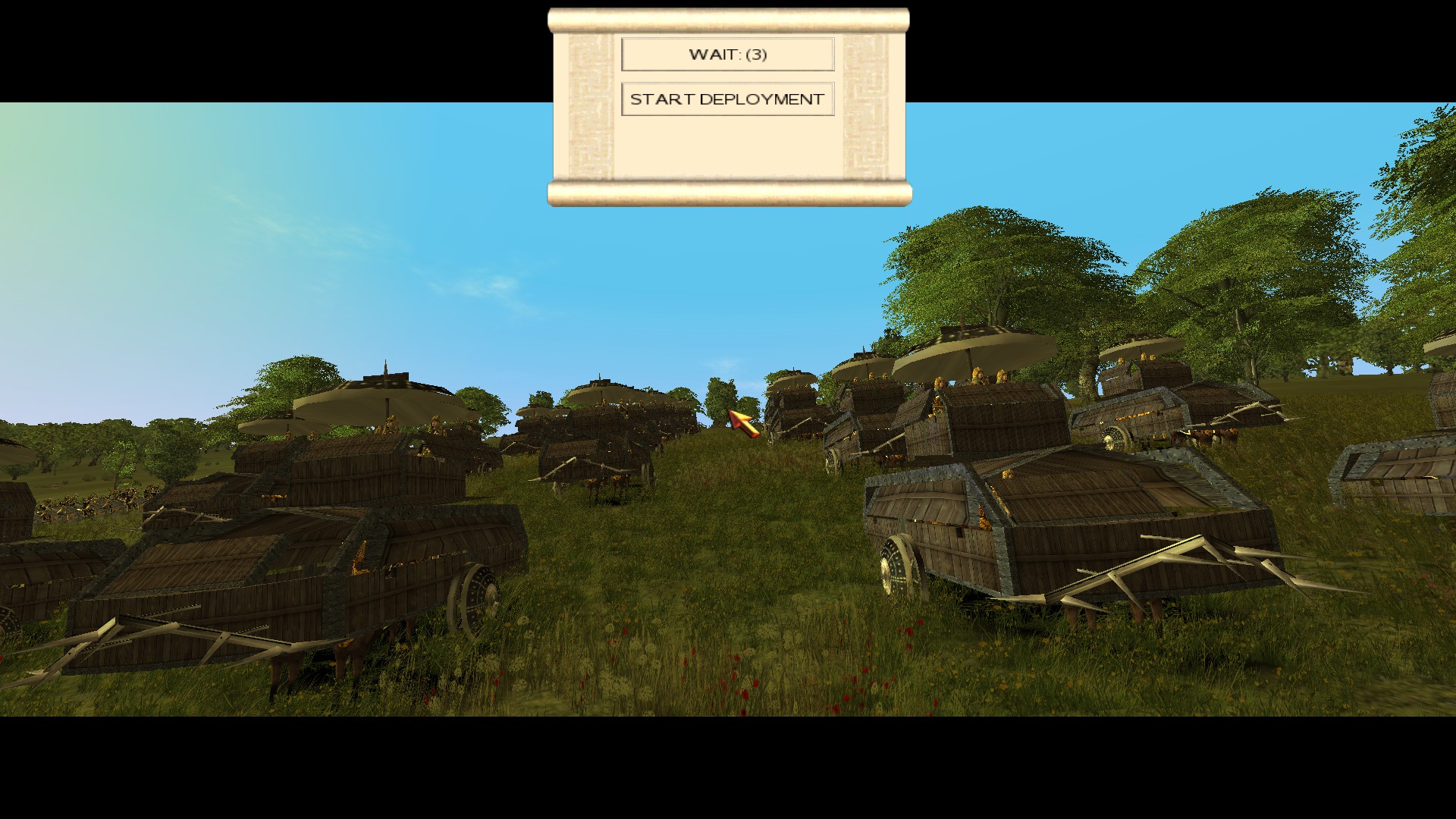 Fig.2b - Birotum, An Ancient Amazon Tank, not unlike what is mentioned in Talhoffer's Medieval Manuscript

Just like Heinz Guderian said, a concentrated Panzer assault is nearly invincible, and will likely put to flight all the enemy facing them.

Of course, the keyword here is "nearly".

So, What about the antidote?

For you readers new to the Amazons: Total War mod, here are some suggestions from the seasoned players:

At the lowest level, you can use multi-units of phalanxes to form into 4 unit square with pikes pointing out from each side. Of course, this would reduce your square's mobility to zero. And the moment your pikemen (or pikewomen, since this an Amazons mod, right?) move, the horde is going to unleash their tank (or tankette) units to pounce on you.

In the Amazons: Total War mod, if your civilization is somewhat advanced, you can recruit mobile artillery units (like the Roman Caro Ballista which shoots long range armor piercing bolts, or the Greek Ebeatos Palintonon which is a mobile artillery firing "airburst" shotgun shell like canister pellets capable of multiple kills, an Amazon Total War first), these units have less protection than the "tanks", but with longer range missile reach as well as mobility to match the "tank" units. The stationary artillery would have some effect, but due to the animation being so slow (just how the RTW engine works), it is almost meaningless as an anti-tank weapon and only good for siege warfare, or that of a decorative joke on the battlefield. You cannot try Rommel's favorite trick on the battlefield with the stationary artillery, which is sending a few troops as bait to lure the Panzer units into an anti-tank trap. But you can definitely do so with the mobile artillery lying in waiting. 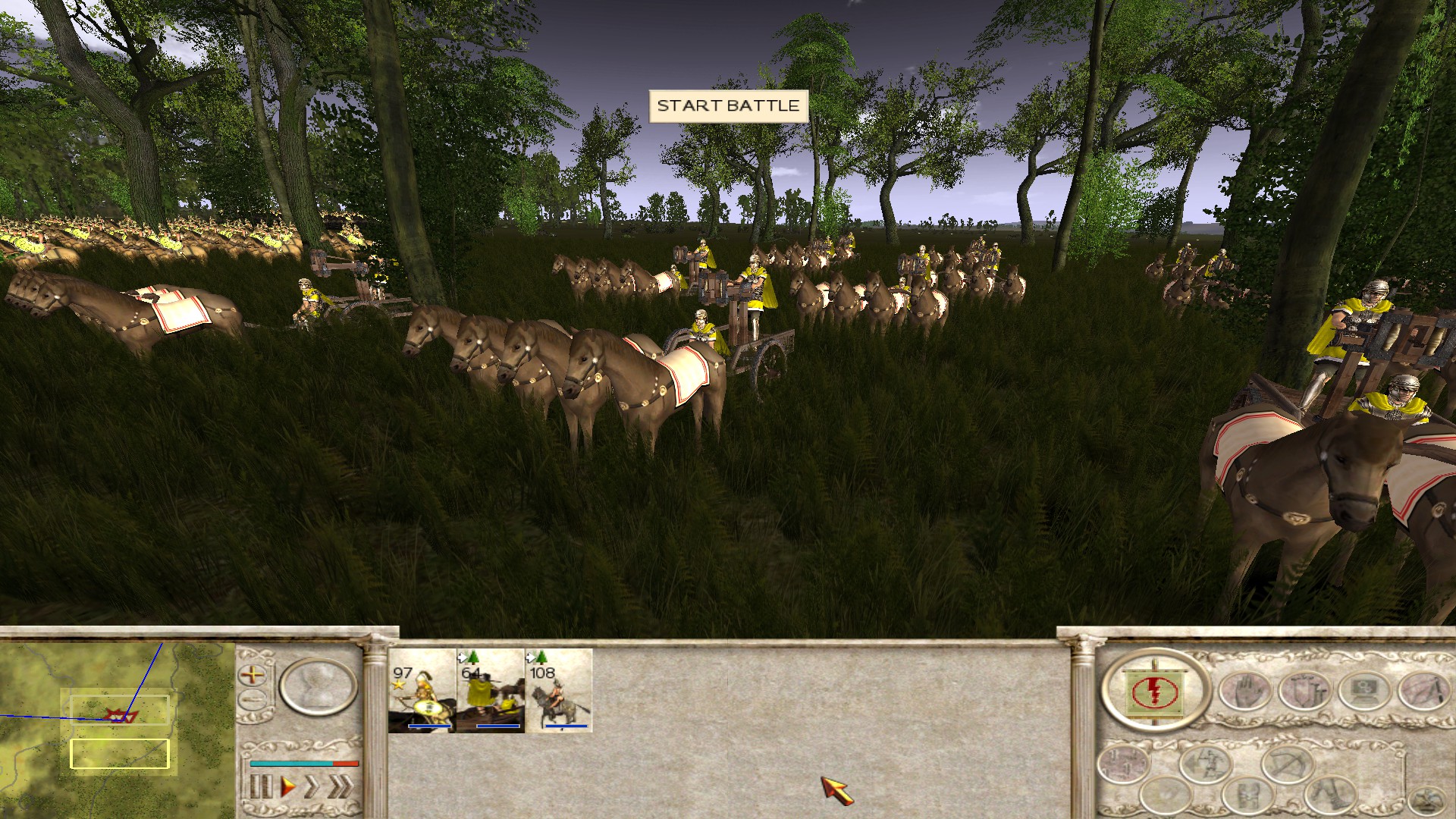 Another option is to use the minefield, (yes Amazons: Total War has got that too, the first in an RTW/BI mod) which allows the player to lay a barrier against the charging Panzer horde. But again, there is very little mobility nor flexibility in such tactics.

At the highest level of civilization, if your faction turned Amazonian (or as Amazon faction chooses the Women Warrior way, yes we leave that as a puzzle), you can recruit a variety of units armed with thermite weapons. These are small jars or vases of cheap earthenware with a spike affixed to one end and designed to crack on impact. The inside of the jar has fire accelerant which ignites at high heat (1,500-2,500 degree Fahrenheit) such that the armor (or flesh) became fuels and rust in the jar along with oxygen in the air became the oxidizer. and the units carrying such missiles have a variety of ways of deliveries. Some are hand thrown (same as modern day hand grenades), others are pole sling launched (another Amazons: Total War first), still others can be catapulted using mano-ballista (meaning man-portable ballista) from on foot, or on horseback, or mobile artillery platform, or even from the top of the elephant. (see pictures below) 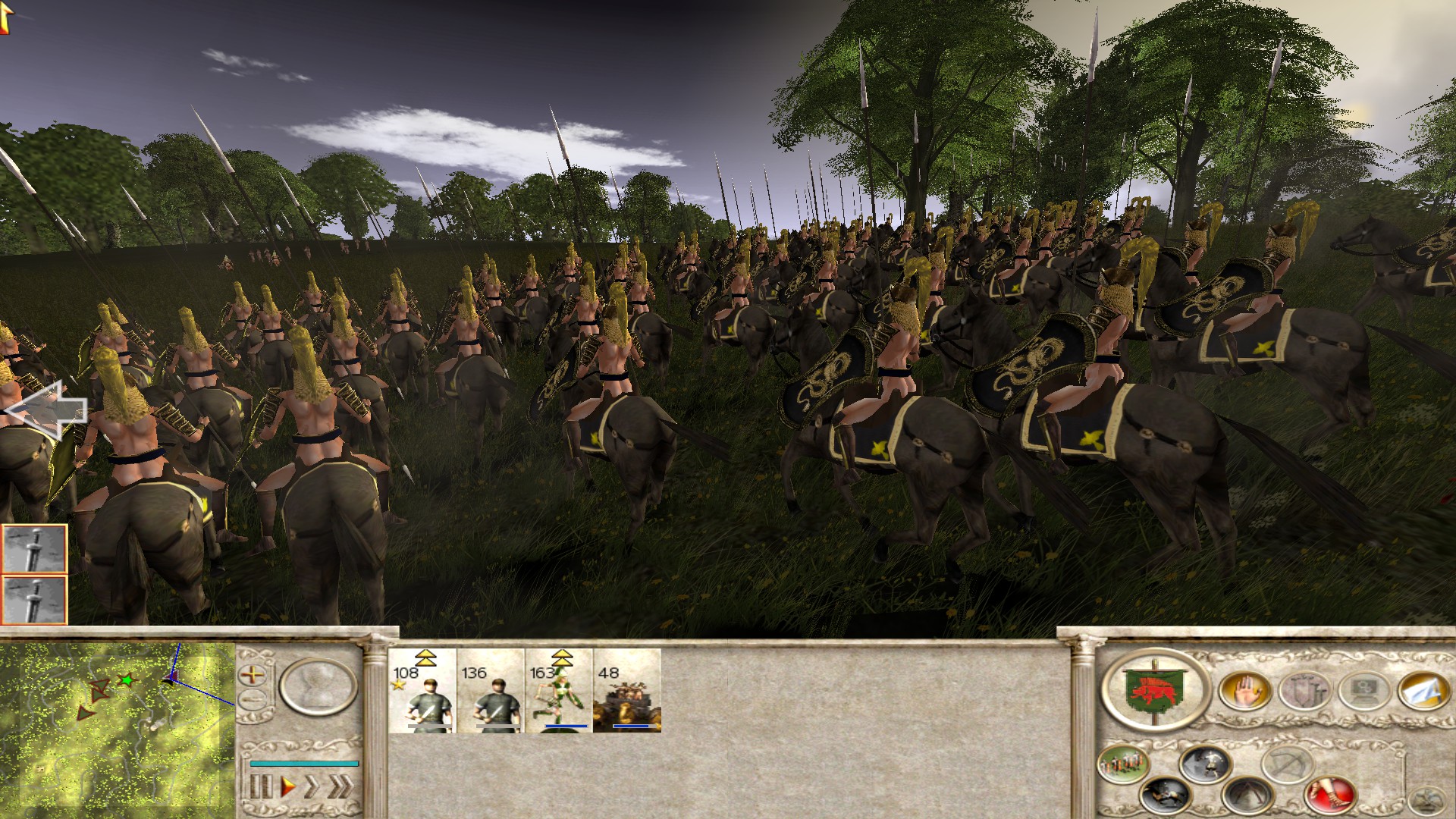 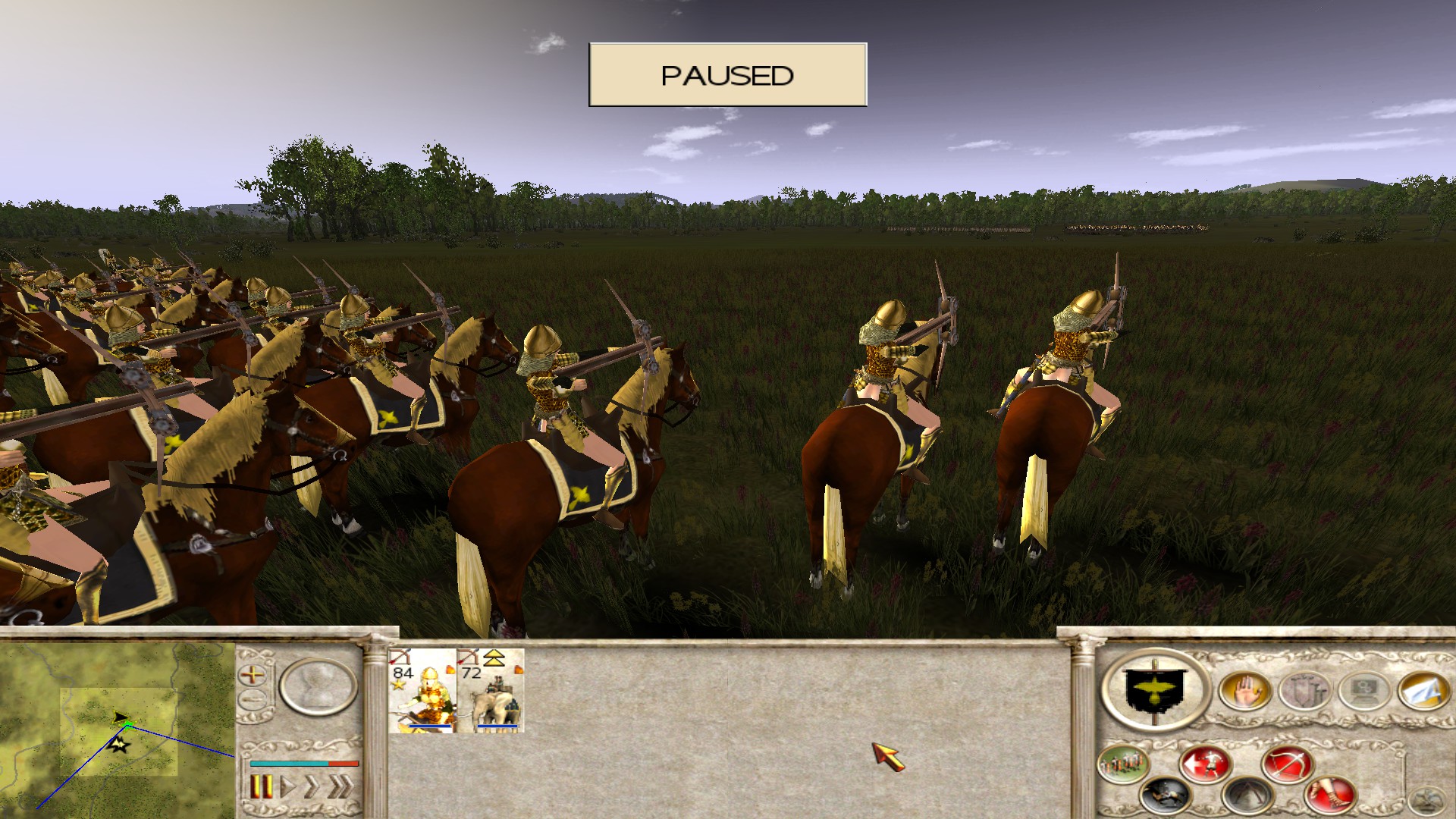 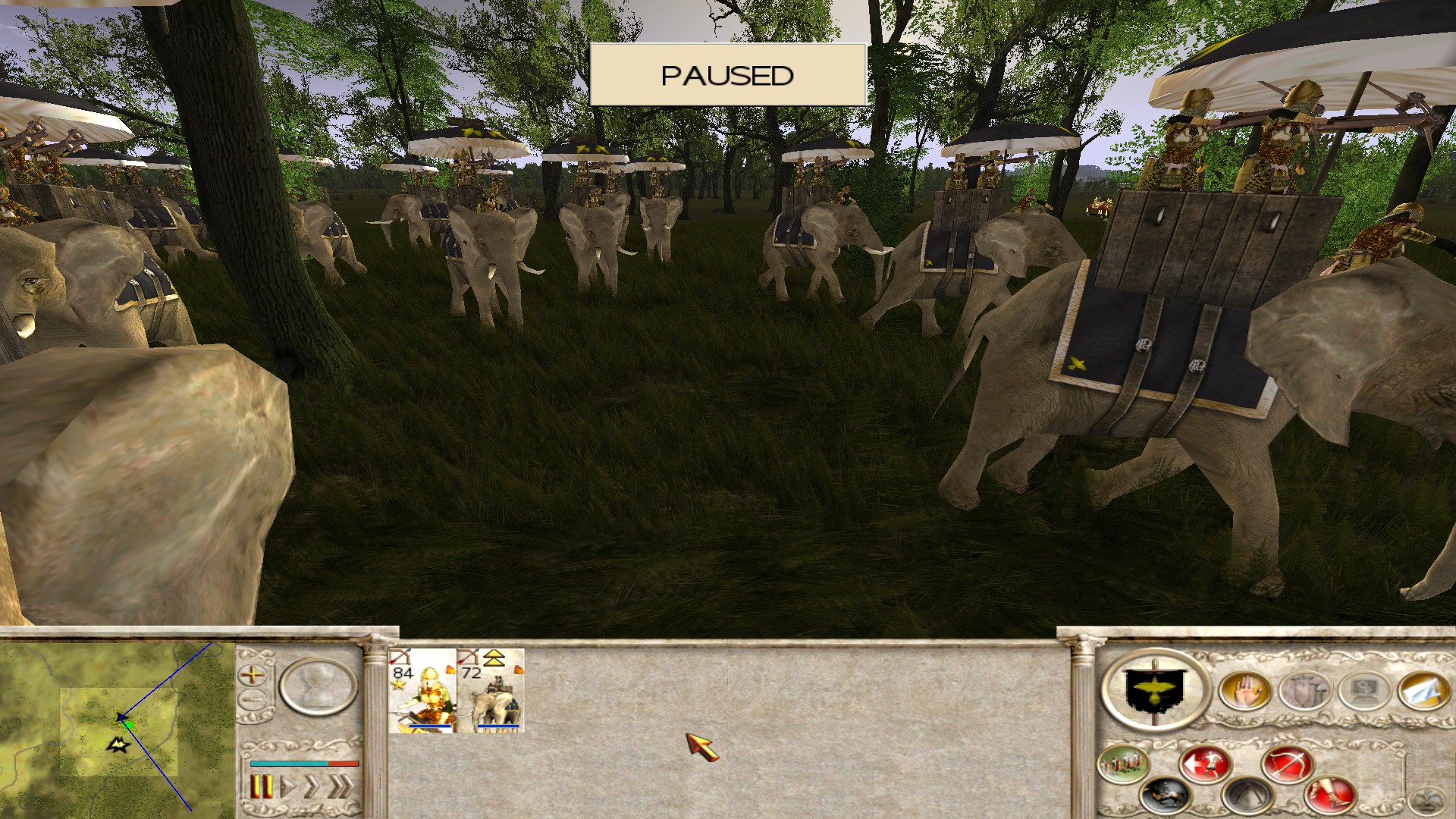 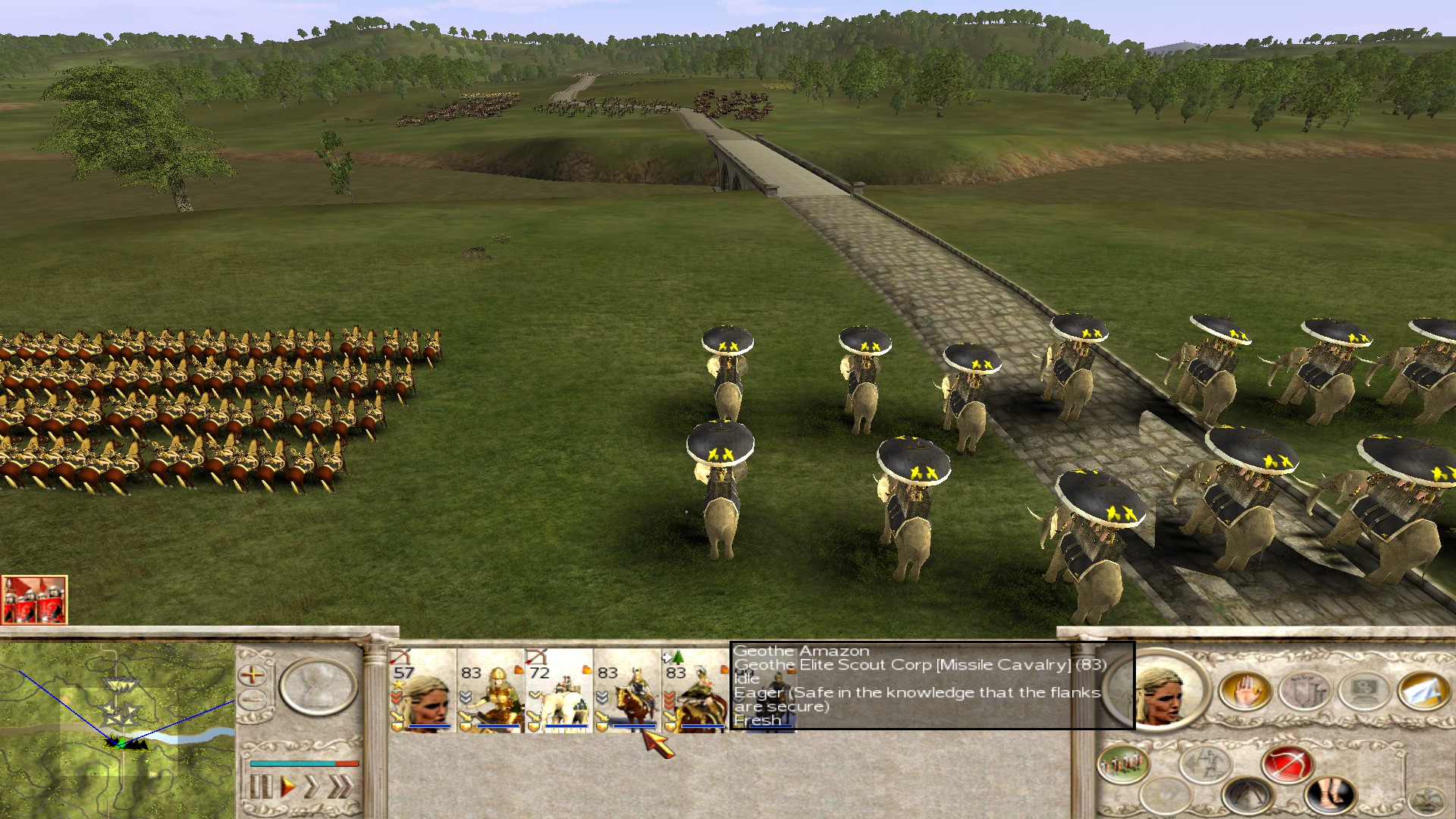 With the last two antidotes in mind, strategy-wise, with some practice, not only you can defend against the faction which you know is going to shift into horde mode, you can also turn the horde feature to your advantage.

Here are some examples, the strategy map below shows the red Amazon holding onto its last province near Patavium (at the upper northeastern end of the Italian Peninsula). The black Amazons are now holding the entire Italian peninsula and the territory east of Patavium. 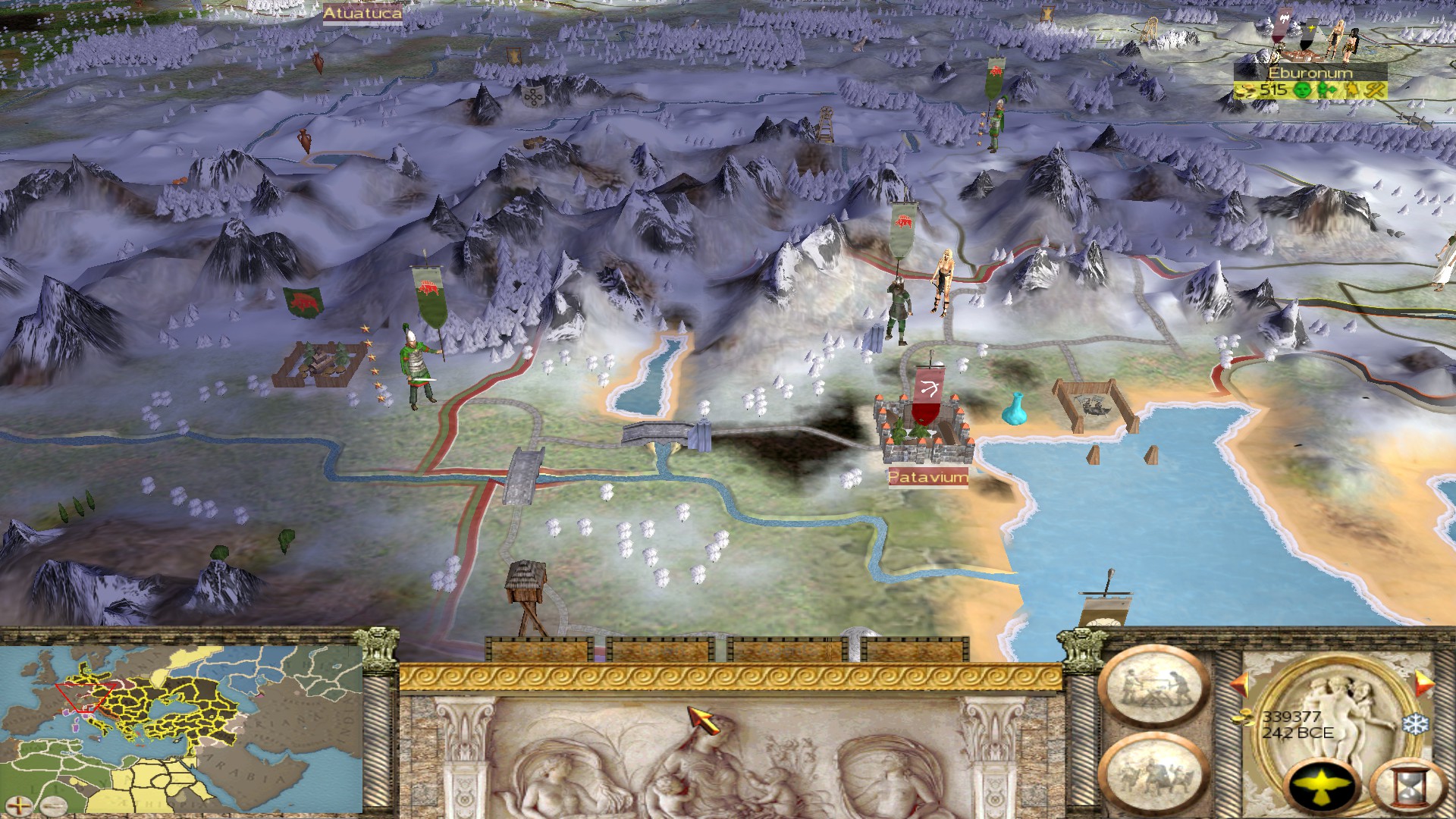 In the next season, the black Amazons armed with thermite units are now besieging the last bastion of the red Amazons. Getting ready for the red Amazons to shift into horde mode. 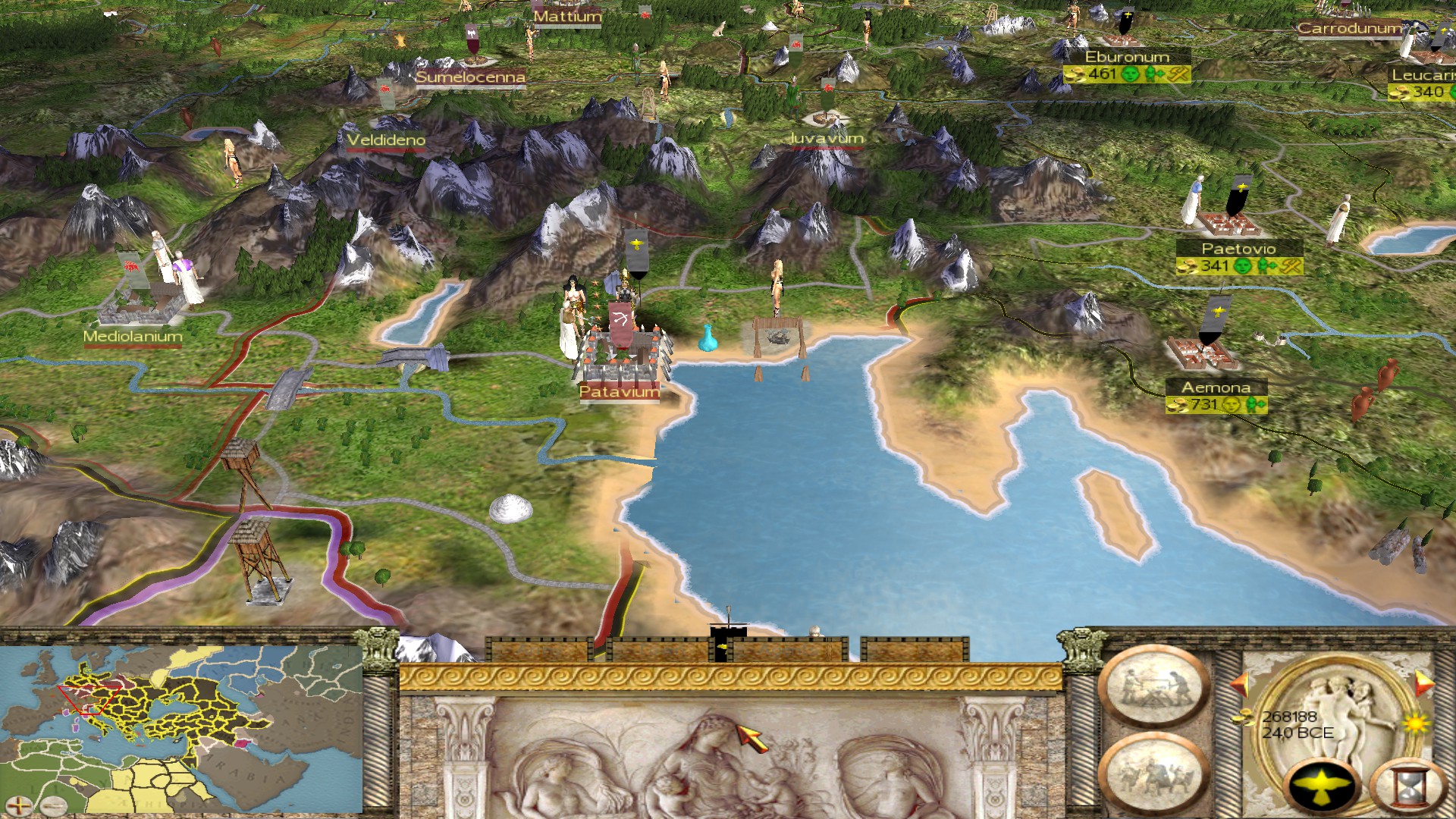 As the time the siege was about to be over, the black Amazon move its armies out of the Italian Peninsula.

The black Amazon already own the Italian Peninsula, so besides the besieging force, it also lined all the river crossings south of besieged city, but not north. 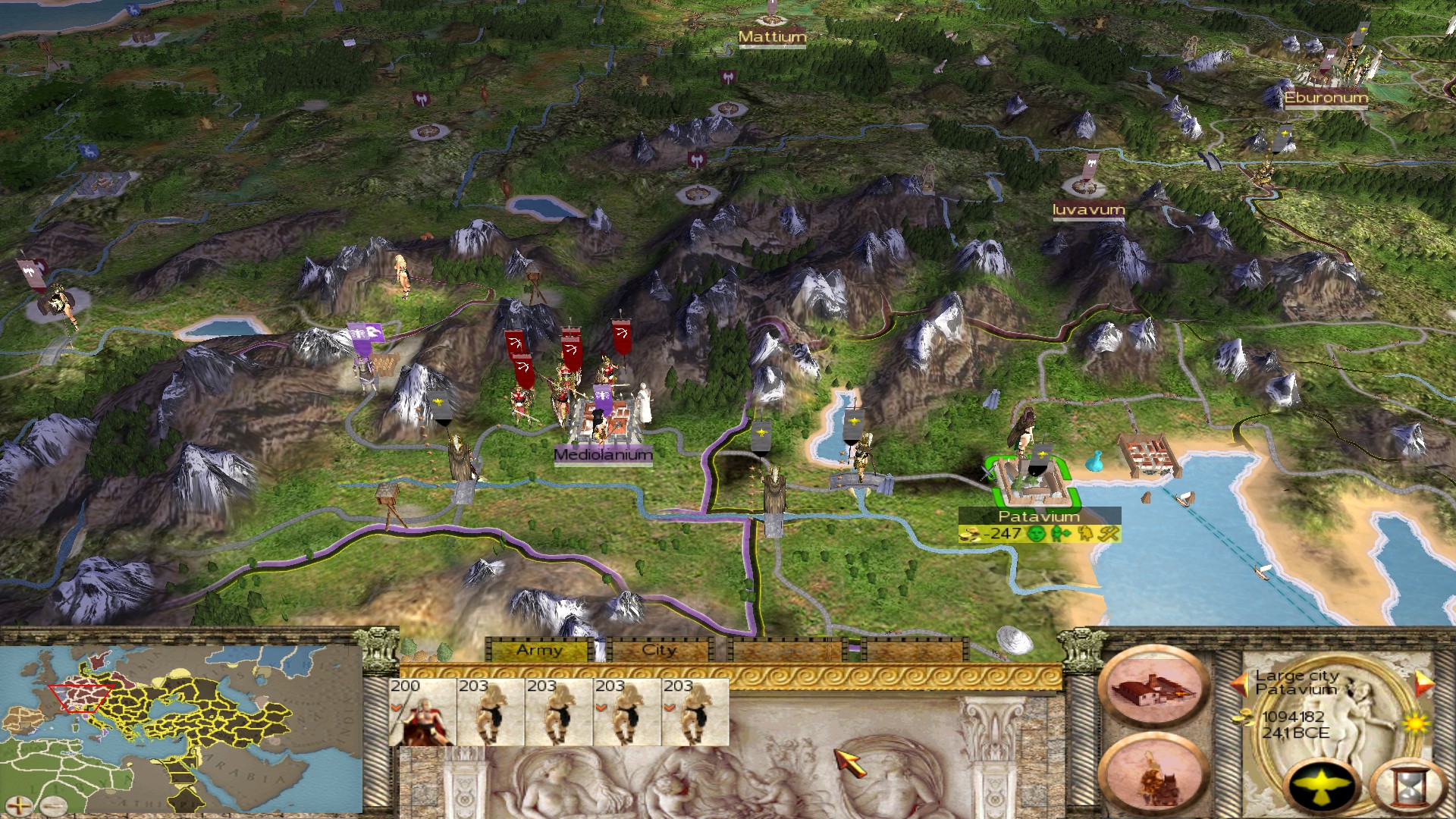 So when the siege is over and the red Amazon shifted into horde mode, see what happened below: 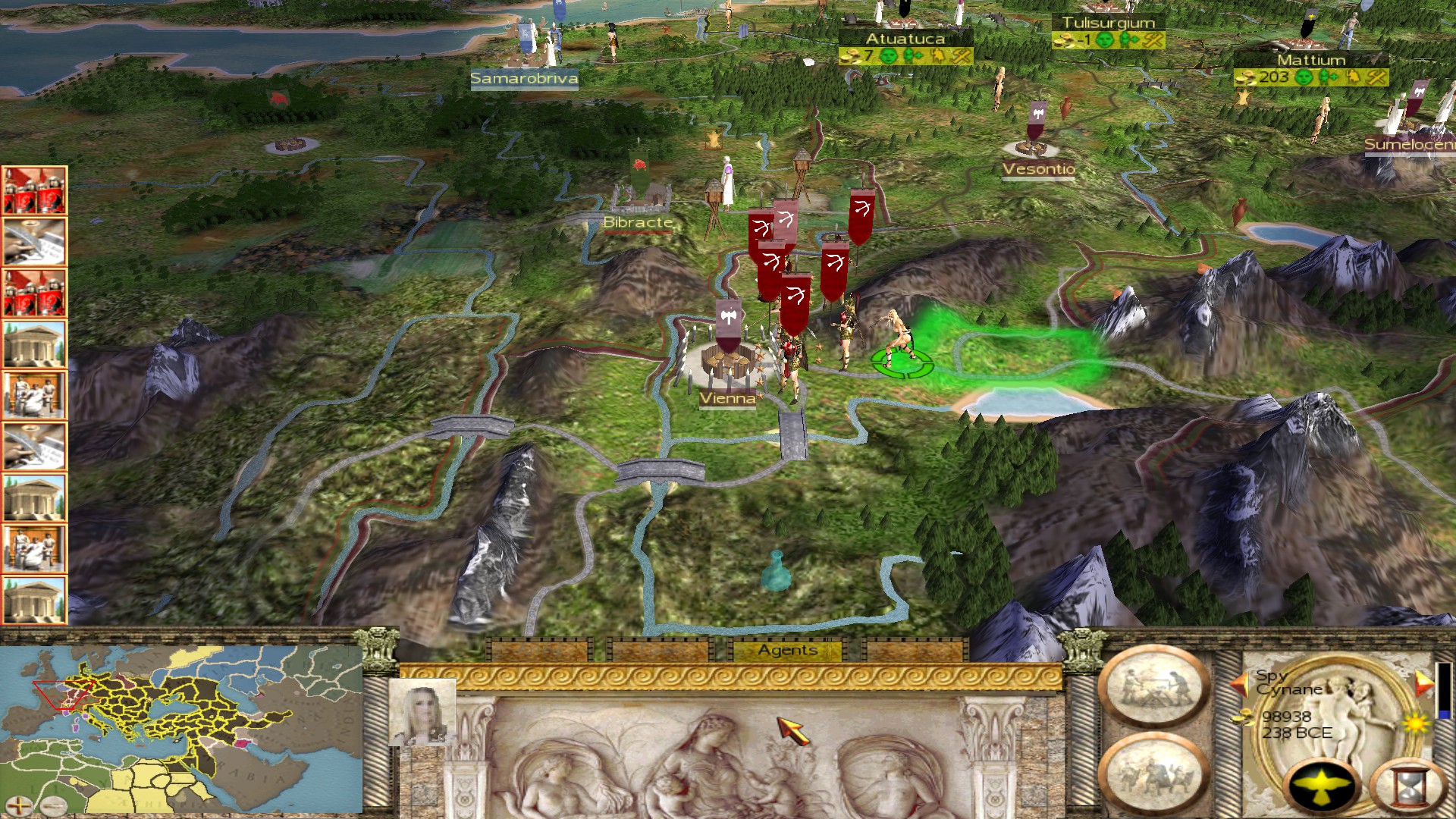 Because when siege is over, the red Amazons in horde mode can only move north, all passages to the south were blocked by small forces along all river crossings, so the black Amazons has successfully forced the red Amazon to go to war up north with Suebii (the Germanics) and the Arverni (Gauls), what is more, as each city or province is taken by the red Amazon, the black Amazon simply follows behind and take over the city because once the horde force settles down, the horde wagons would have to be demobilized (i.e. all the farmers and peasants went on to take possession of their new conquest and therefore quit the army), and it makes easy pickings for the black Amazon without ever having to go to war with either Gauls or the Germans.

The next screen shows what each stack of red Amazon force contains: 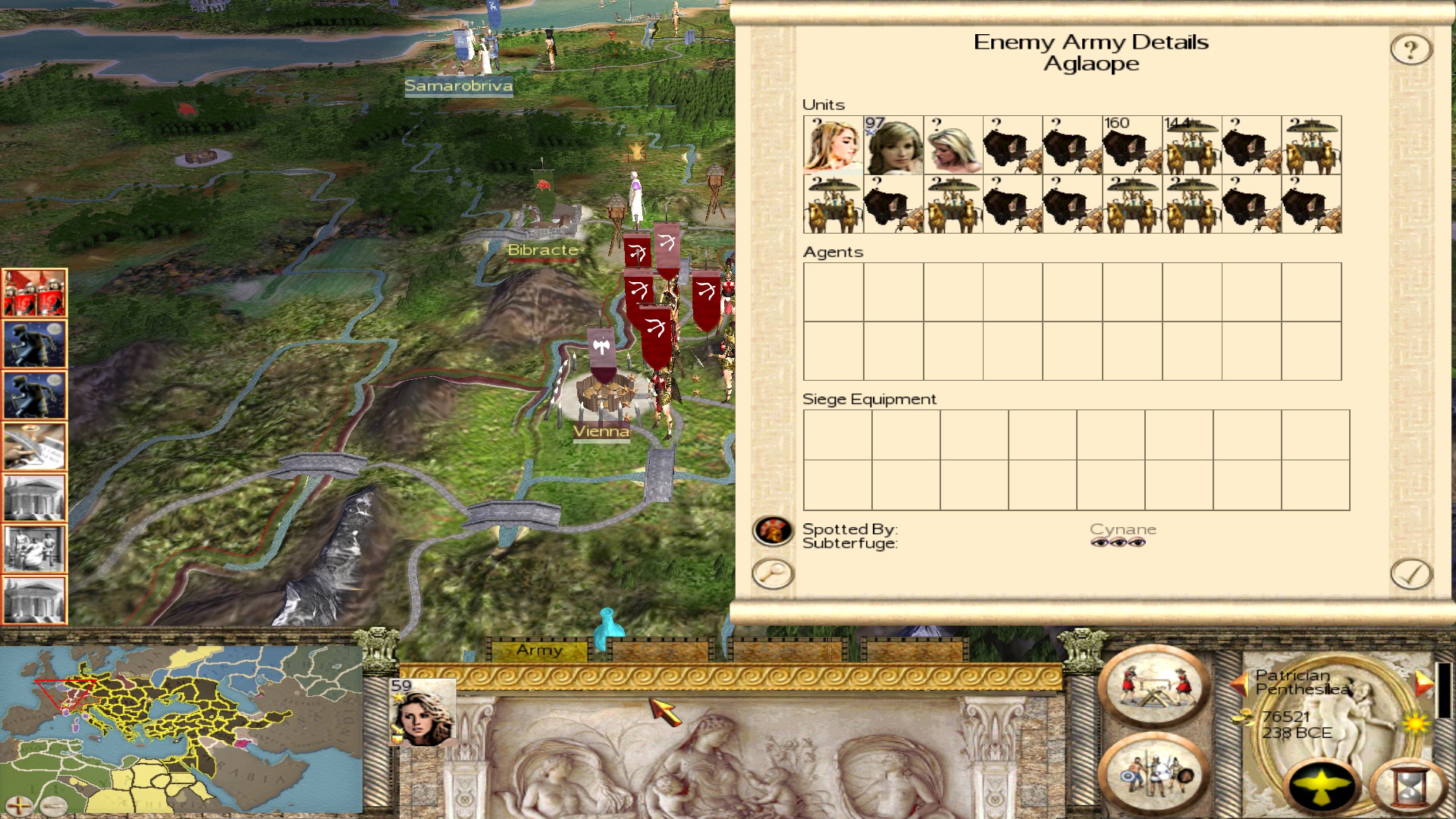 Notice the light and heavy wagon units on the stack, such a stack in the hands of one capable general can wipe out the forces of an entire enemy nation. But using the antidotal solutions provided, not only your faction can contain such monster Panzer columns, you can also use them to your advantage.

This article is contributed by Celeste, using her team leader ParthianShot's account.