It's time for our next update, and as promised, this time it's a big one :) Magic has prepared his newest version of his Mechcommander 2.5 code, which is now being officially assimilated as the Mechcommander Omnitech Alpha build. Right at the start, I want to thank Magic for his outstanding work, and his agreement to join into our project here.

XNA build for the editor (extract xna build and don't dbl click XNABuildSetup.exe. Dbl click "XNA Build System.msi". It will install and report an error in the end about something missing. Just finish the install and it will be OK.

And finally, here is the downloadlink for our alpha (click image) : 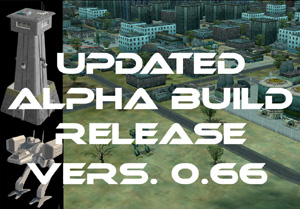 Here is the list of features which made it into the alpha build :

- ca. 75 different mechs (more than 90, if you take Clan variants into account). Retail Editor had only 29.
- ca. 70 vehicles (including variants) featuring different chopters, powered armor types or the vehicle probs movable. Retail had 34
- a different purchase system (different from what we plan, so this one is obsolete/outdated)
- Skill try for sensors and jumping based on current sensor and jumping skill value.
- Fall when failed jump skill.
- New resolution 1920x1080.
- Sensor specialty skill and Jump specialty skill are now obsolete.
- 4 existing sensor levels are based on sensor skill value.
- Jump distance reduced for heavier mechs, more tons - lesser jump distance.
- Unit roster is no longer sorted; you can change as you wish. That way you can shift damaged units back in formation and put undamaged in front.
- 6 formations available for now. Formation key is "K", press to cycle through formations.
- Mechs are free of object2.pak (object numbers start is at 1200).
- Number of polygons limit tripled.
- A modification of rollins message box implemented.
- All vehicles are free from object2.pak (object numbers start is at 2000).
- All buildings can be free from object2 (object numbers start is at 2500, original buildings will be left in object2)
- Set of Rollins buildings and some other buildings (i.e. a Mechhangar like in MW4)
- 5 new mechs (Fafnir and Lupus by Karl, Intruder and Thug by magic and MsdCat MkII by MCO team)?
- Number of potential abl commands doubled (was 256, now 512).
- Modified Mech purchase screen. New mech purchase simplified to the maximum, no memory consumption at all.
- Modified rollins message box added and accessible as abl command (for use in main mission abl file):

Synthax for the message box:
setTextMsg(0,"PROBE",10);
first parameter can be 0 or 1.
0 - instant message for the duration of number of seconds (10),
1 - rollins message box with press enter to continue, in this case third parameter should be 0.
Second parameter is text message. It should have no limit because it passes a pointer to string to underlying function.
Third is a number of seconds to display a message in case first is set to 0.

Note : Since it's based on the Source release, there are no videos being played, and no multiplayer is possible.

Magic's Exodus Campaign (vers.2.0)
A rebalanced version (a little harder) of the old Carver 5 campaign which uses the new units.
A set of missions representing "MW2 Mercs", not tested, not really working, it's also Alpha state and will receive an update in the future.

Also be sure to check out the great new images being uploaded into our gallery, which will give you an impression what the new look of the upgraded game content will be.

Here is an example, what you can find over there and what we are planing for the new game : 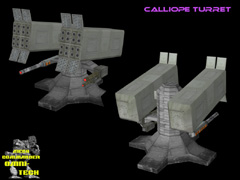 Karl and Magic also worked hard and brought 5 complete new mechs to the game, more to follow. These mechs are still made in the current art style, but are definitly looking great ! Click the image for a larger view.

The last info for today is regarding our lod-system. First, I hoped that we will be able to implement a good working LOD-System into the code. After searching around a little, I noticed a few lod models from the old retail release, and some tries turned out,that the engine already has a pretty good lod system. Of course there is always room for improvement, but this system will allow us to continue the higher polygon model style that we already started and that are shown in the pics of the moddb gallery. In time, we will recreate everything, starting from small stuff over buildings and then the mechs themself. Still, no 30 K polygon mechs for you ;), but the look will enhance a lot so that you can choose with a near zoom and high detail play, or rather zoom out more for the strategic gameplay.

So, that's enough for today. Be sure to check out our recruiting post as well (see here : Hard-light.net ). We can always use coders (you can never have enough of those people around :D ) and UV-Mappers ( the last mostly, because I suck at creating good UV-Maps in Truespace for spherical objects) and 2D Artists. If you think you can provide some skills, send me your "batchall"