Our ninth alpha release will be made on Sunday, November 4th. Here's a summary of some features you can expect, although as always, everything is subject to change. 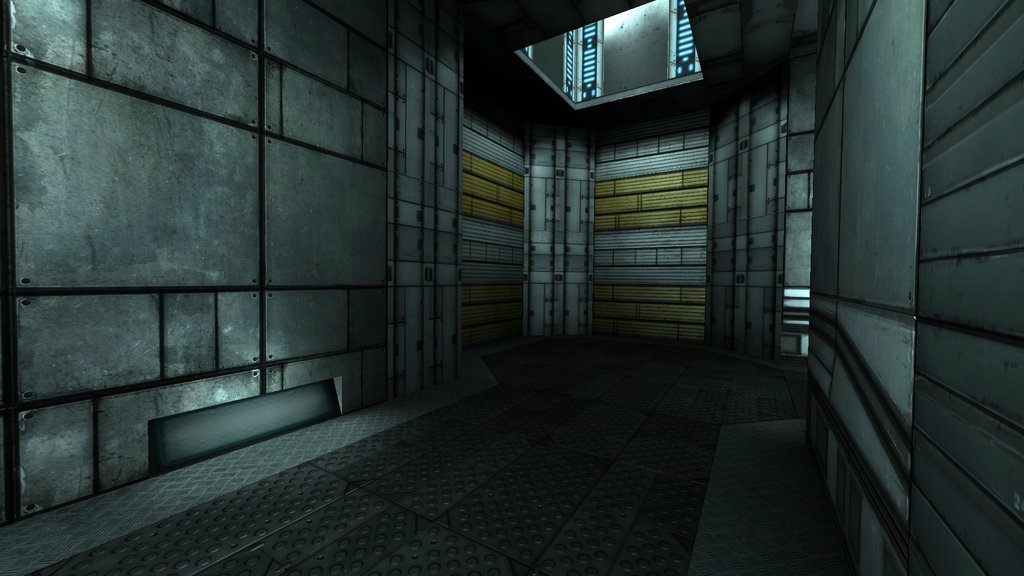 One of the new bumpmapped hallways in Plat23

On the mapping front, we've got quite a bit of activity going on. Jack has been working on his Plat23 and Thunder maps, while Viech has been continuing Parpax. You can expect a new version of Plat23 to be released, with added bump mapping and noticeable performance increases, due to our usage of the compressed WebP image format. The map file itself is also half the size it used to be, from ~30 MiB to 14 MiB. As a result of this, WebP will no longer be optional while compiling the game, but this shouldn't be much of an issue as many distributions come with it by default in their repositories. Also, you can expect a new beta of Parpax, with new areas to explore, build, and fight in. Once Viech finalizes the layout of the map, he'll begin updating the texture set to take advantage of our engine features, such as normal mapping. 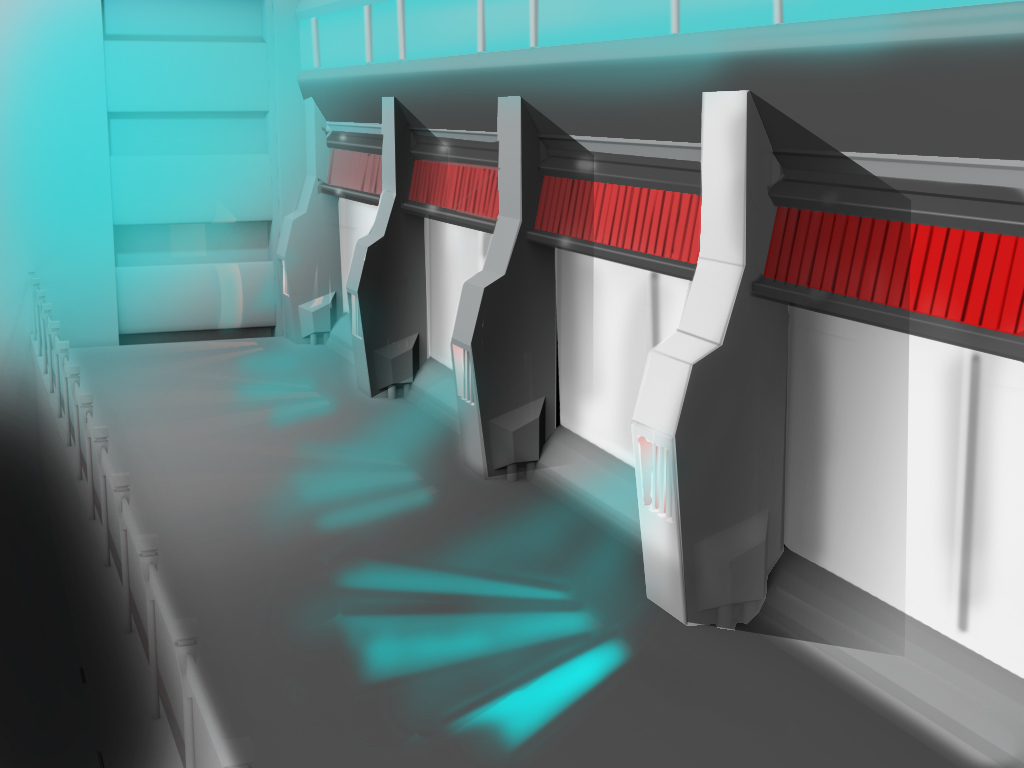 A concept shot of a new map by residentzack

While they won't be included in our ninth alpha release, I'd like to mention two more maps currently in development. The first is by residentzack, who has joined us from the Warsow project this summer. Over the last few months, he's been in the concept stages of a brand new map for Unvanquished, one that is being themed as a sort of futuristic medical complex. He has recently begun to work on the map itself, and as shots come in, I'll keep you posted. In addition, Pevel has joined us, and you may recognize him as the creator of the map Perseus. At the moment, he's in the alpha stages of a new map, Yocto. It's set in an underwater base, and will have a suitably eerie theme to it. You can expect to play it in a few releases. 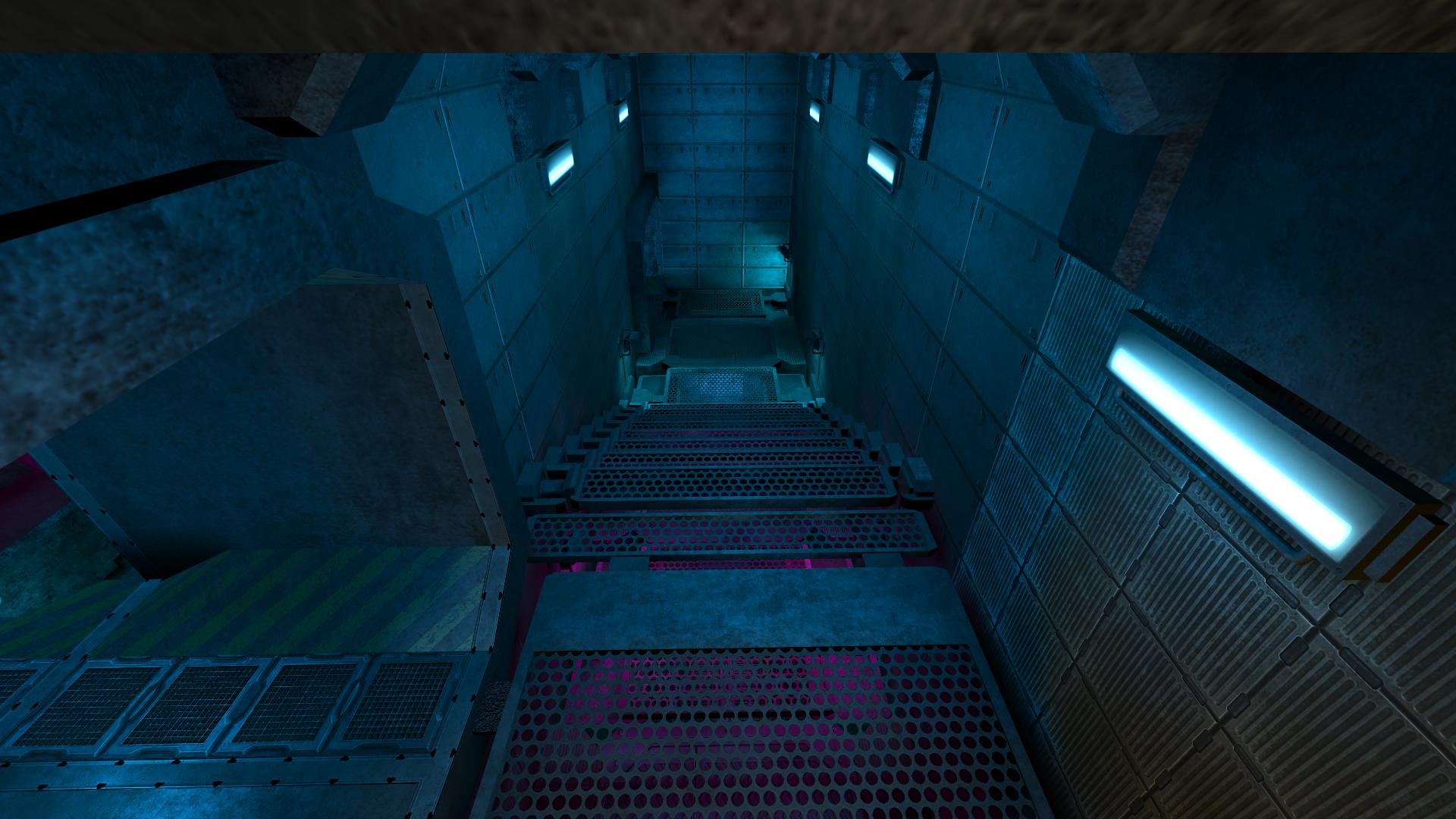 An early shot of a staircase in Yocto

The engine has also received some neat new updates this month. For instance, we now have an experimental HUD selection menu, meaning that as long as the files are in the right place, you can easily switch between installed HUDs from within the game itself. To go along with this, we'll be including an alternate alien HUD for you to pick, if you desire. We have also updated the translation code so that fewer things need to be translated, meaning it should be much easier to translate the game into your native language. If all goes well, you can expect to see Unvanquished available in Polish and Ukrainian this release. If not, then in a subsequent release.

Our renderers have seen improvements as well. One of these is an md3 and md5 model cache, in which our new models won't be constantly reloaded after each map change, saving you some load time. The change is already noticeable, and will become even more valuable over future releases in which more of our models are in the md5 format. Lighting on models has also been fixed in our old vanilla GL renderer, so if you're still using that for some reason, things will look better. There have been quite a few other changes to the renderer too, and I'll summarize them in our release post.

Of course, as always, expect surprises. We may have a new model or two, and we're also putting the finishing touches on our first major gameplay change. It's a subtle one, or at least appears to be one at first sight, but it's a noticeable departure from Tremulous.

AWESOME! I like the rate at which you guys release stuff. It's good. :D