Alpha 3 covers a lot of ground. There have been fundamental gameplay changes, new features, bug fixes, and performance improvements. This is the most stable and complex version of Outlier so far. I think you'll like what I've been working on.

Posted by masternerdguy on Nov 7th, 2014

Intro
Alpha 3 covers a lot of ground. There have been fundamental gameplay changes, new features, bug fixes, and performance improvements. This is the most stable and complex version of Outlier so far. I think you'll like what I've been working on. 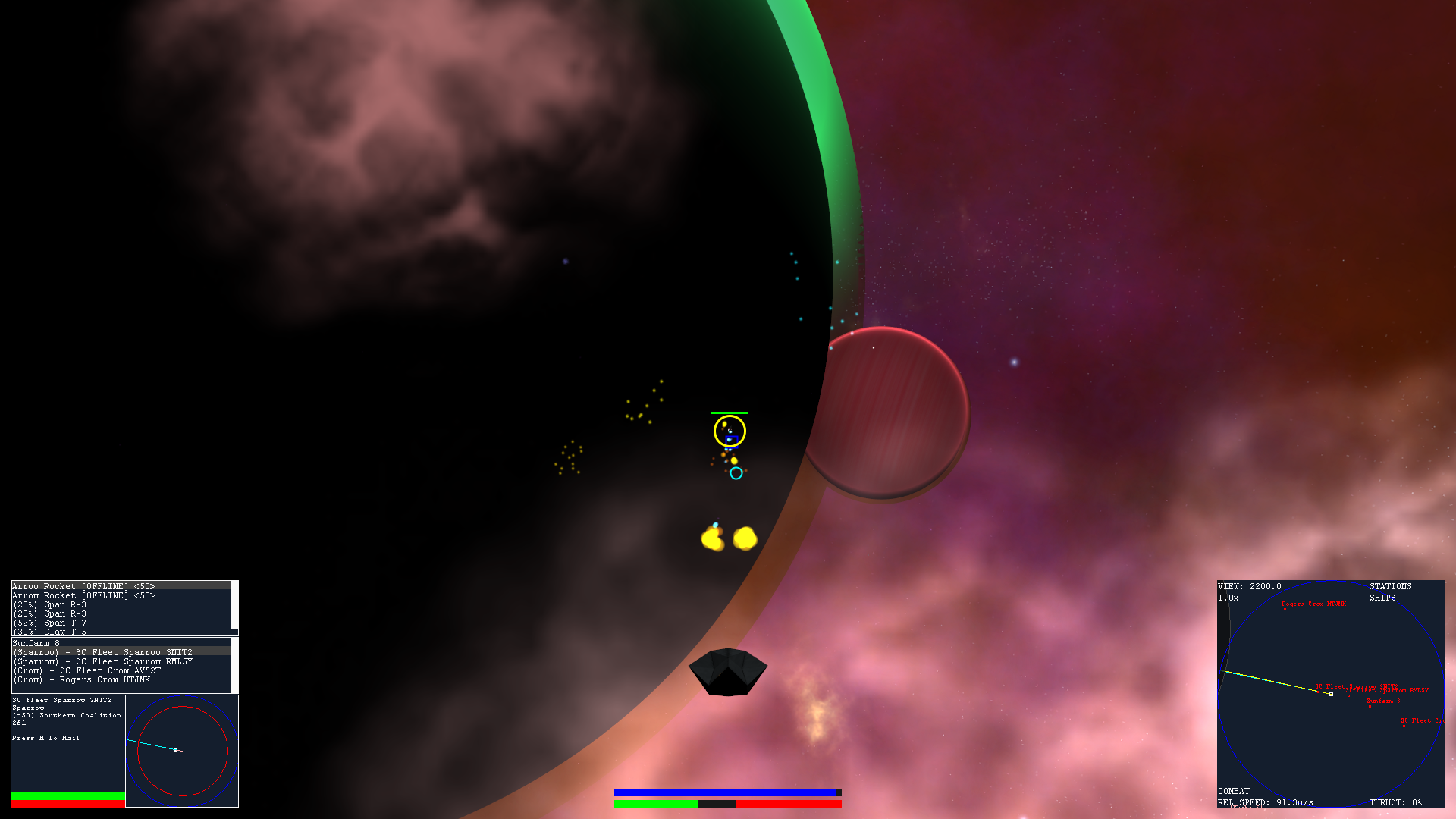 Disclaimer
I want to point out that this version is not compatible with either the saves or config files from Alpha 2, the first thing you should do is delete the .outlier directory if you have one. Having an old version's files around would cause problems, it's safest just to delete the directory. This is located at

Remappable Controls
Almost every control is now remappable. This was requested by a real world friend of mine who pointed out that this is 2014, he should be able to remap controls. In Alpha 2 you could remap some aspects of your joystick. Now, you can remap almost every control by editing a config file. See the Controls.txt file in the download for details. 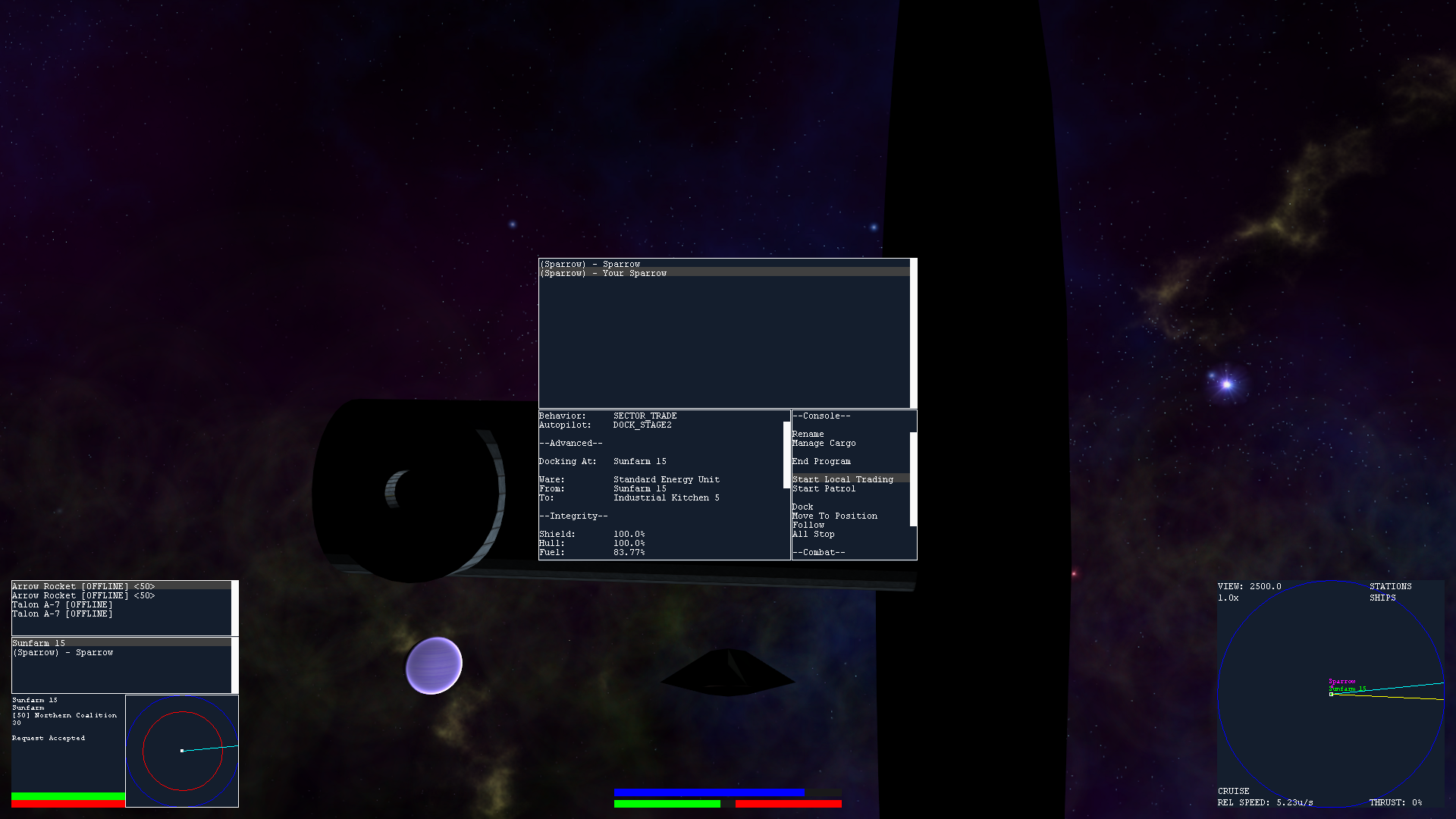 Improved Lead Indication
The indicator you've seen in the past wasn't really a lead indicator, it was a relative velocity indicator that showed you what direction and how fast something was moving relative to you. This is handy, but doesn't help you aim guns. 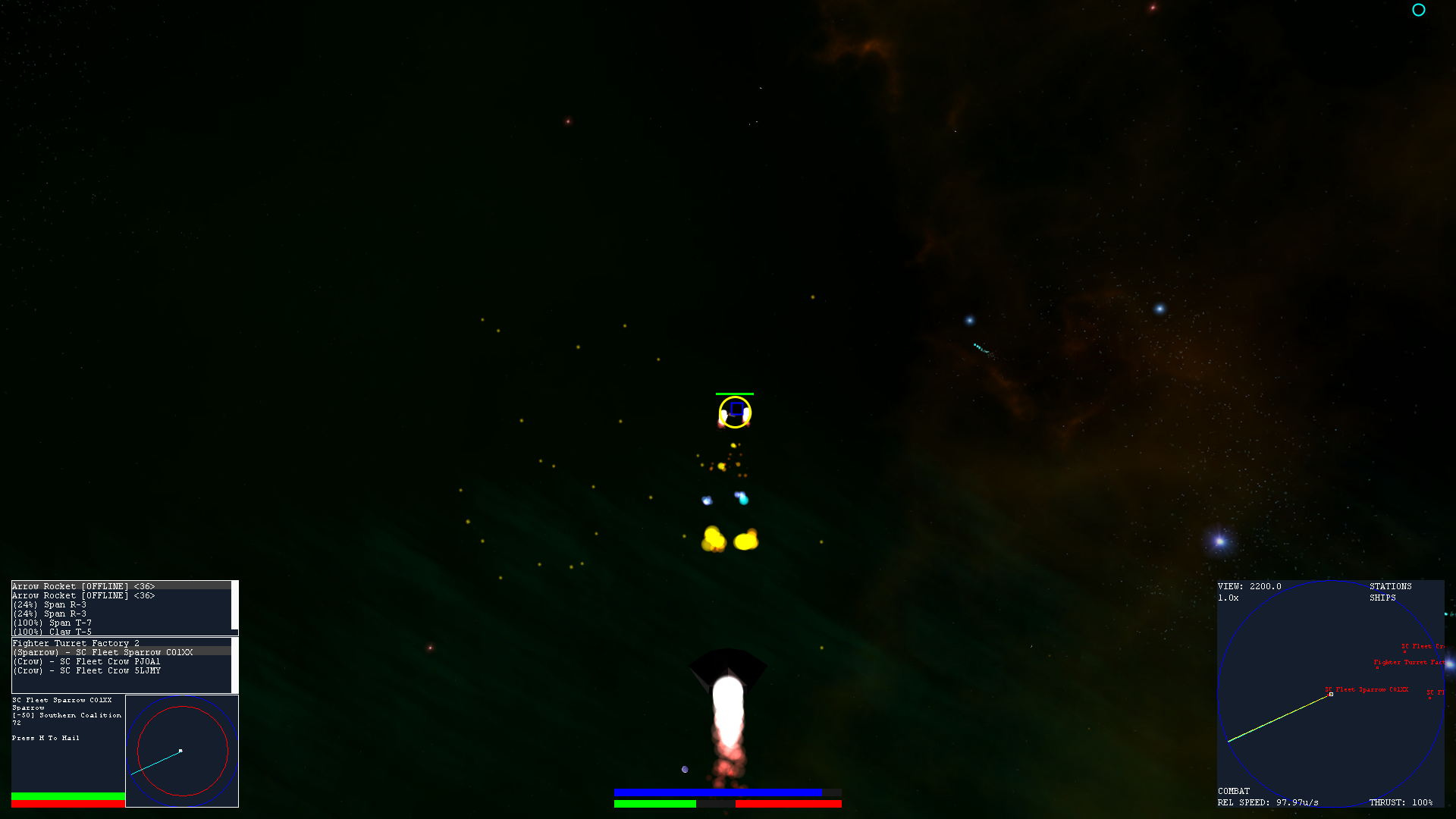 This marker has been rewritten into a proper lead indicator. It takes into account the average speed of your cannons and shows you about where to aim to hit the target. In case anyone is wondering, the indicator is calculated like so:


Where speed is the muzzle velocity of the projectile being fired. 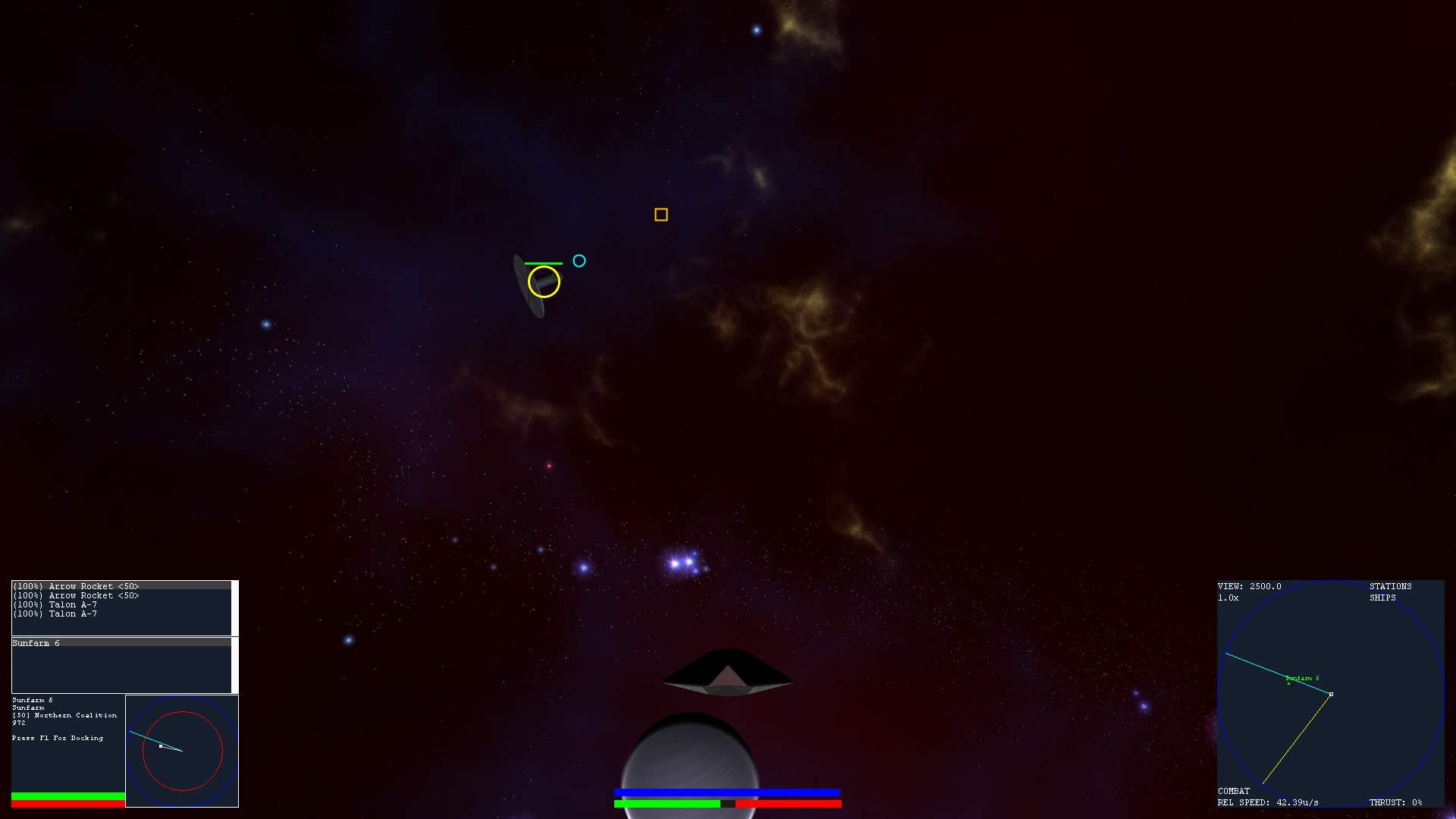 To make up for the lost relative velocity indicator, a dedicated reticle has been added for it. This is a cyan circle, the lead indicator is a square.

Turrets (Watch Your Back)
What good is a really heavy fighter if it isn't bristling with independently targeting turrets? No good at all, in my opinion, which is why Alpha 3 has introduced this wonderful weapon system. When enabled, a turret will automatically attack the closest enemy (that it has a line of sight on) to the ship it is mounted on. Turrets use the same lead indication calculation as the main guns do, but they calculate it relative to themselves instead of the entire ship. 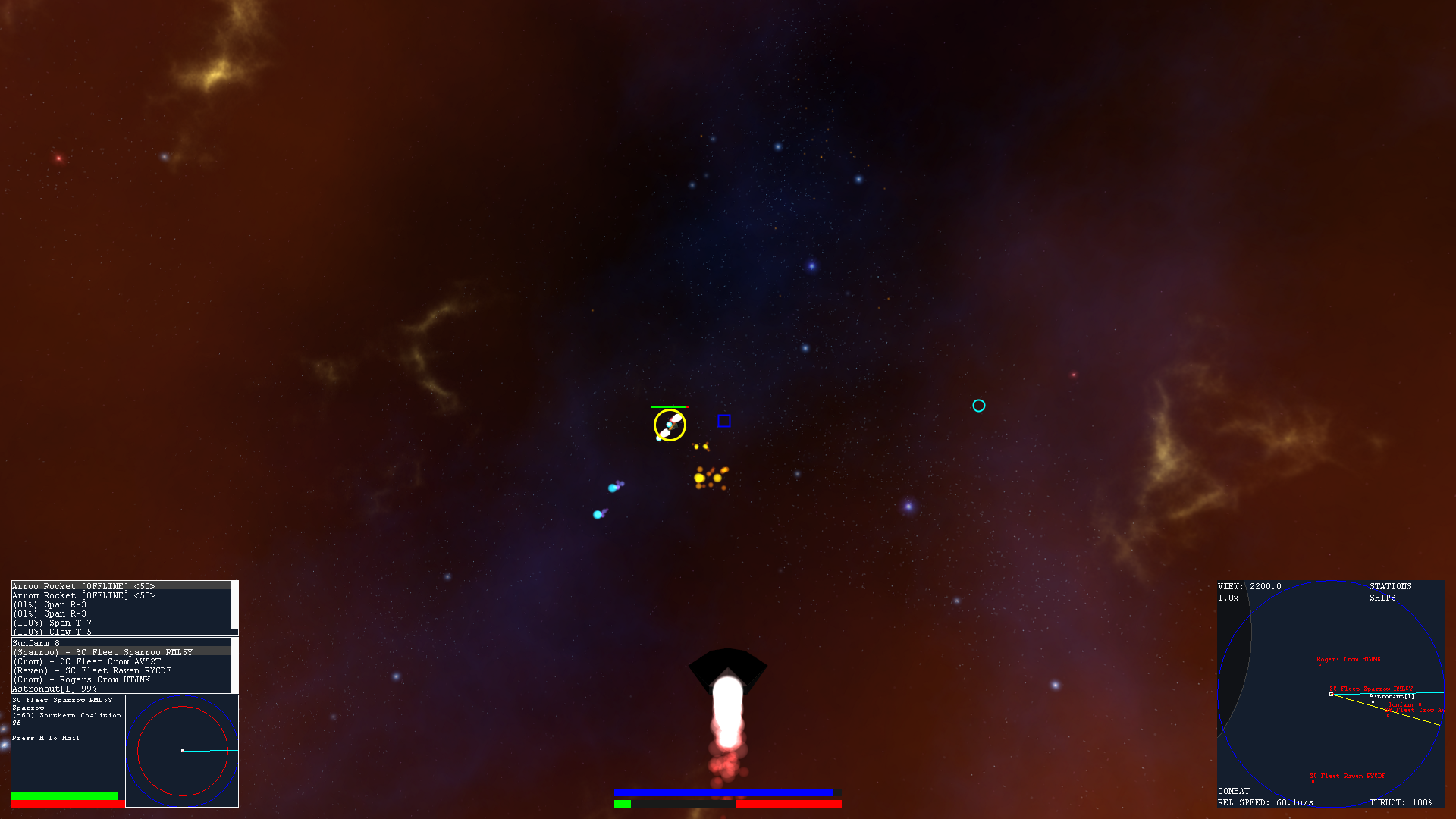 Right now, the Crow and Raven have received turrets. The Crow has a rear turret, for shooting at things while running away, and the Raven has a rear turret and 2 flank turrets. This makes the Raven a much better heavy fighter because it can lay down fire in multiple directions. Ravens are now quite dangerous. 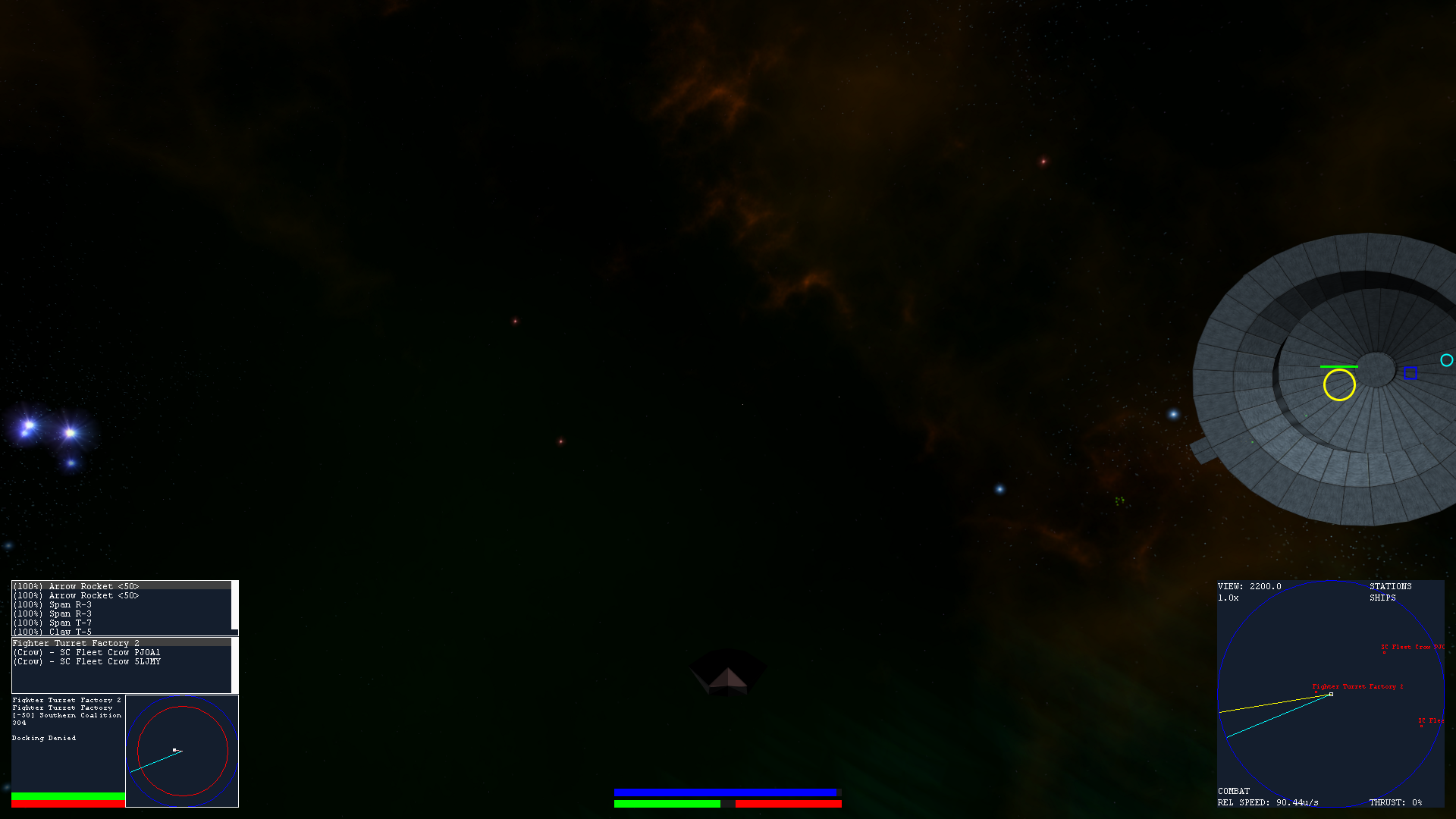 In the future, the work done with turrets will allow for gunboats, destroyers, and carriers to be added. These all depend on turrets and could not exist before this point. But that is for a later release, for now the existing fighters have received some upgrades.

Missions
In High Albedo, you could talk to NPCs and, if they weren't hostile to you, you could get missions from them. These missions were very challenging and in no way scaled with your progress as a player. This same mission system now exists in Outlier. 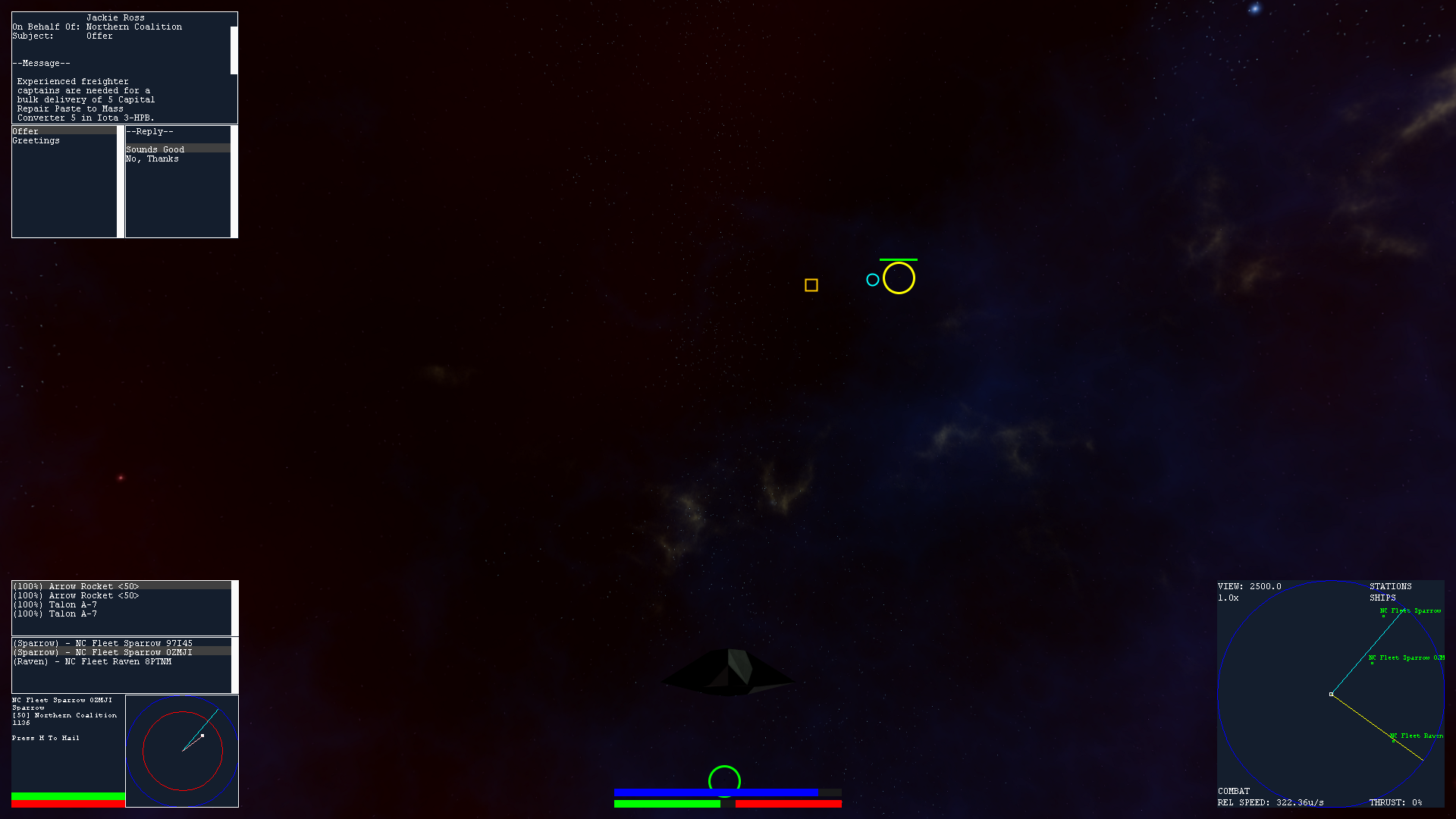 To get a mission, find an NPC you are on at least mediocre terms with and hail it. You'll be able to ask for jobs, and will be sent an offer. The following kinds of missions are currently available.

A cool thing about the mission system is it never spawns anything, all missions are against an NPC that already existed long before the mission was proposed. The dynamic universe's population affects the mission pool.

Get Rich or Die Mining
A classic income generator, especially in the early phase of space sandbox games, you can now go shoot asteroids and collect the ore they split off to sell. This is probably the lowest entry barrier profession in space sandbox games, and provides an income source even if you've hit rock bottom (hehe). 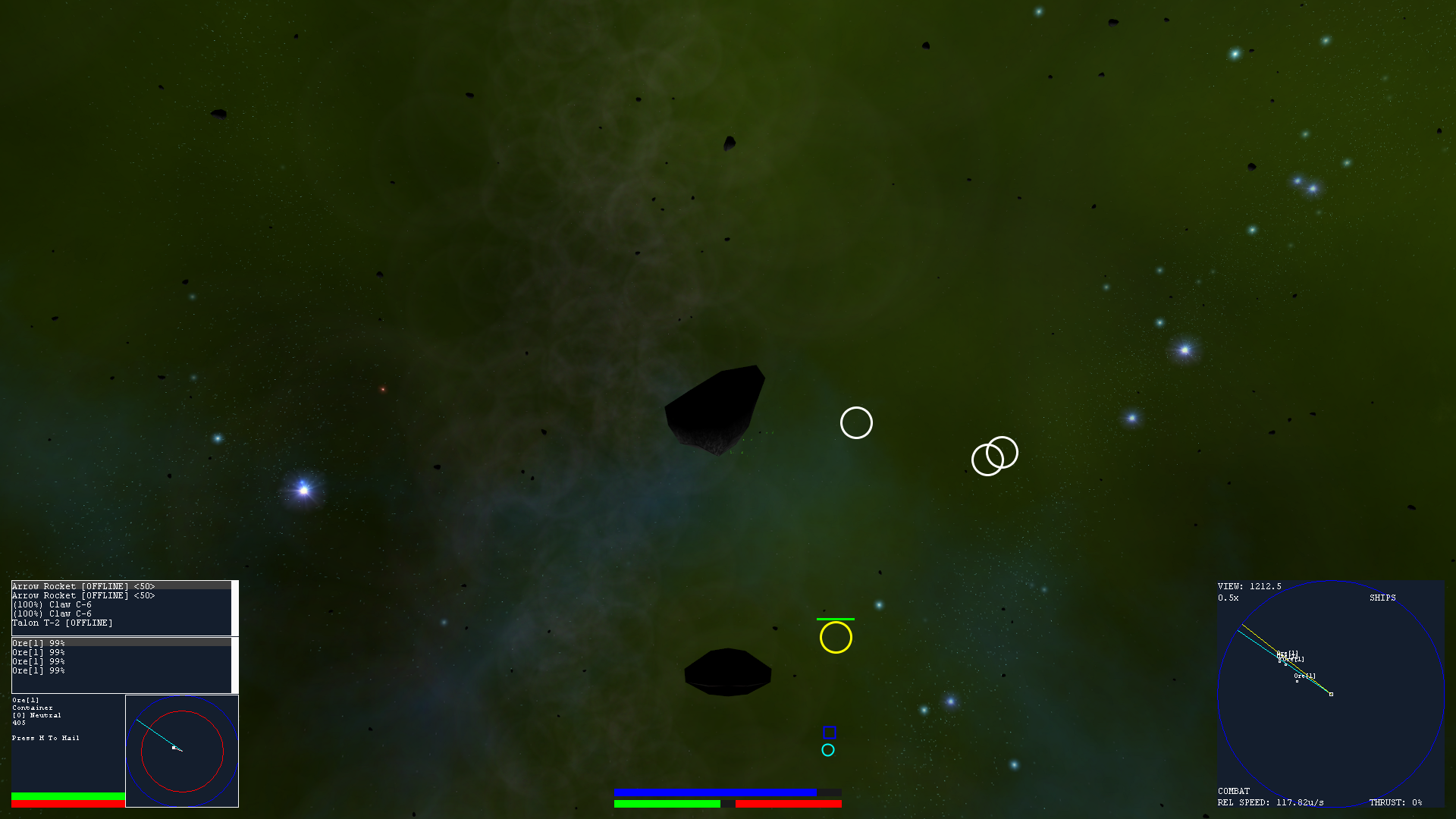 Simply find a suitable asteroid field and fire your weapons at one of the asteroids. It will split off units of ore that you can collect and sell. Collecting the ore is the hardest part, you'll have to maneuver your ship into the moving ore fragment. This is where that relative velocity indicator and a steady hand comes into play.

UI Improvements
The user interface has been overhauled to make it easier to use. Firstly, you'll notice that it is now hover-to-focus instead of click to focus. This is handy, because you just have to move your mouse to something to start using it. It also makes using the UI easier in a combat situation since you don't have to click as much.

Secondly, you'll notice that ESC no longer quits the game. Now, quitting requires pressing F4 and clicking on an "Exit" button, so accidentally quitting the game is virtually impossible. ESC now dismisses all the center-screen windows allowing you to easily clear your field of view. 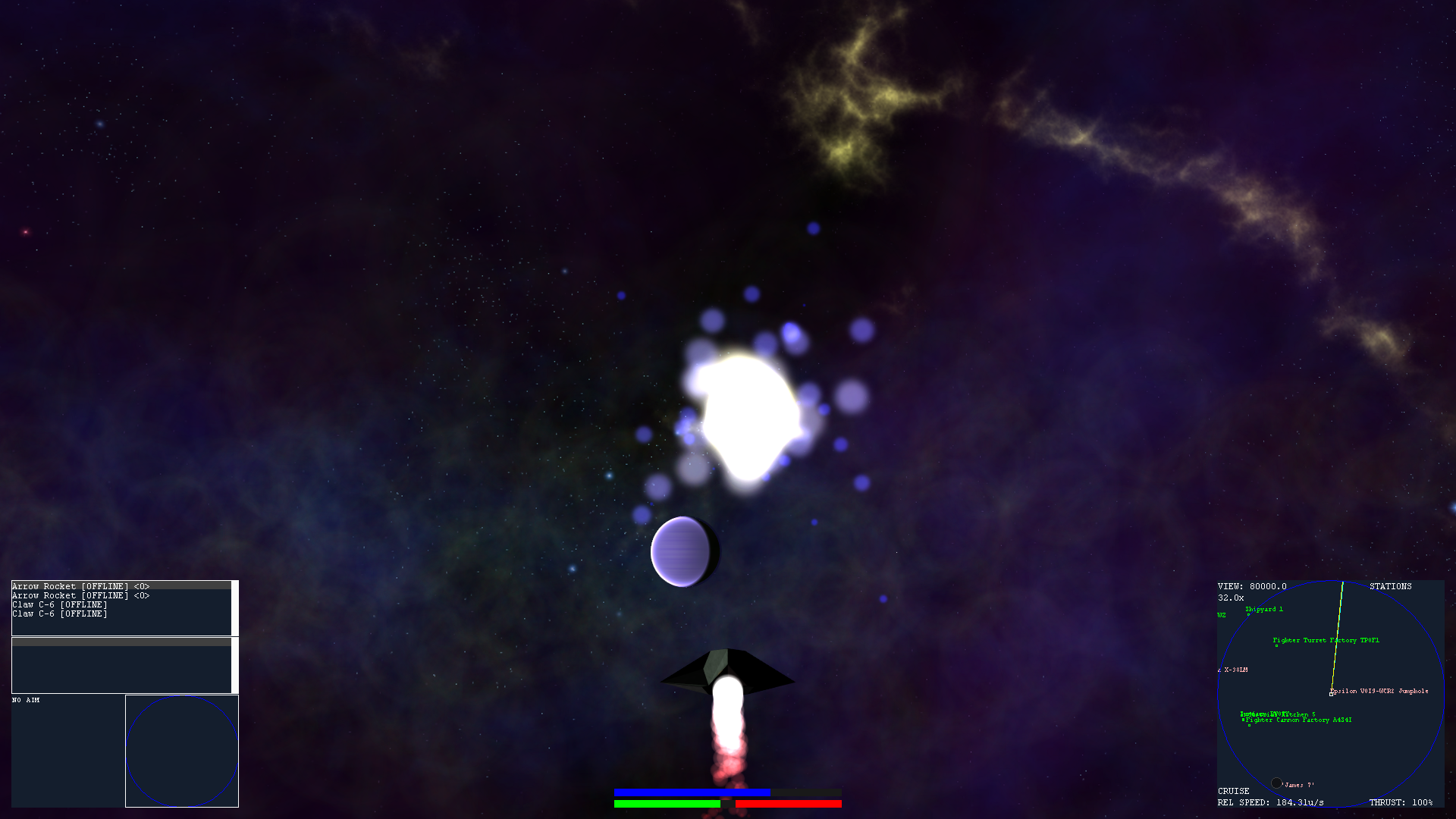 You can now use SHIFT when typing into an input box. Not every character is available, but you can do cool things like type a lower or upper case character (which I find handy). Scroll bars actually work now, they stopped working in the transition from High Albedo to Outlier. You can scroll through lists using the mouse by dragging the scroll bar.

A few other edge case UI bugs have been fixed too, which I don't find important enough to go into but I'm sure will help someone somewhere.

Cruise and Combat Mode
I've added a penalty for keeping weapons armed all the time. When a weapon is armed, a ship experiences a velocity penalty. When weapons are off, you can go much faster than you can now.

This solves the problem of balancing travel time against combat mechanics, because previously a ship could go just as fast fighting as it could traveling, and it made balancing mechanics hard. Now, ships that are traveling can travel fast and ships that are fighting can fight at manageable speeds.

AI ships have to observe the same restrictions you do, and they will turn their guns on and off based on what they are doing to optimize their travel times.

Bug Fixes, Balancing, and Performance Improvements
There have been lots of assorted bug fixes and performance improvements.

Future Vision
With all these mechanics working properly, I want the Alpha 4 release to focus more on world building (new ships, new stations, new factions, overhauls of existing game assets, new wares, new missions, rumors, etc). This was pointless with so few mechanics in place, but since Outlier is becoming a proper space combat and trading game, it is time to revisit this. 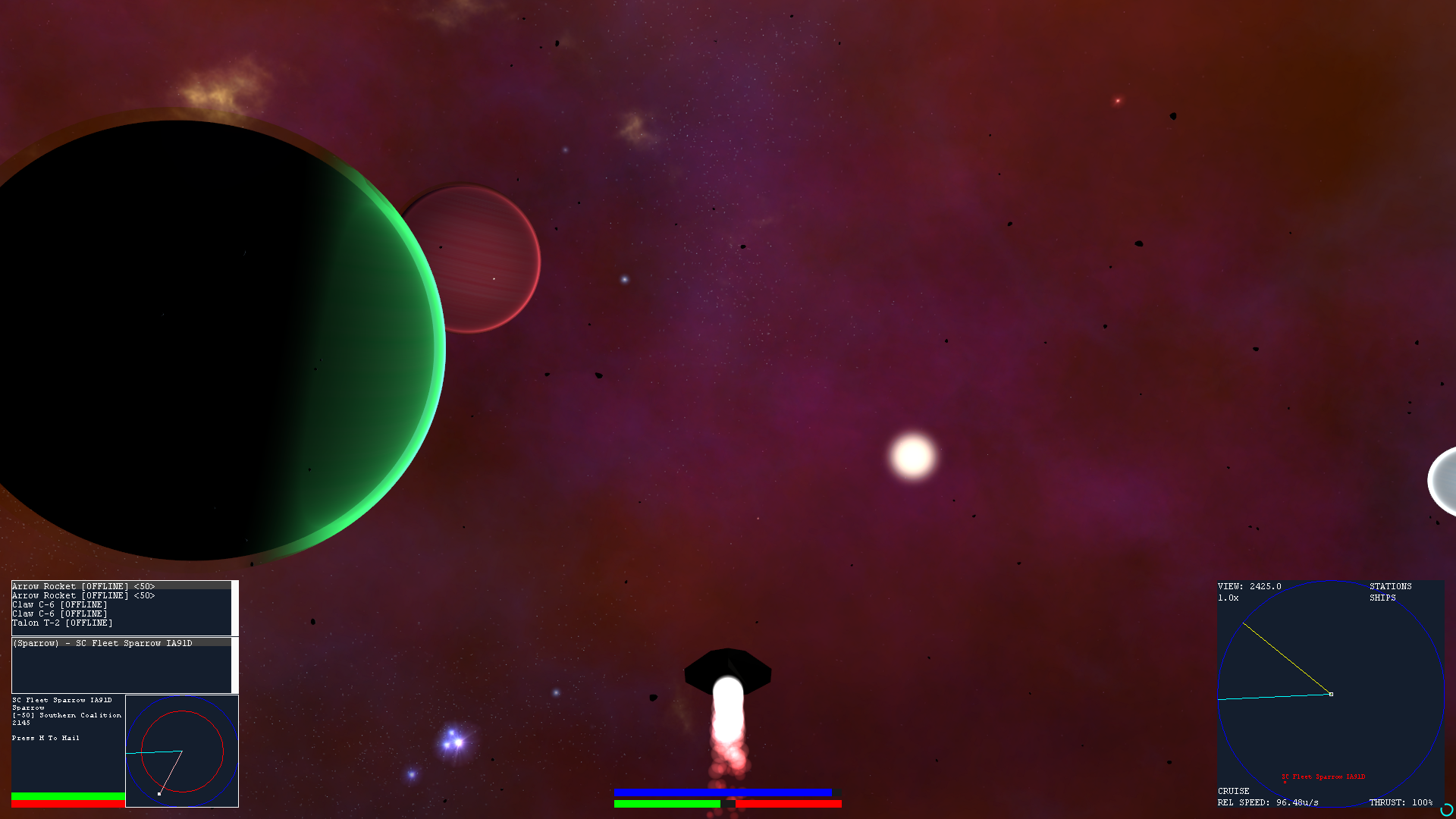 When adding new ships, I want to add carriers and transport ships that you can dock large numbers of fighters to, as well as wing command mechanics to make commanding fighters easier. This goes along with adding capital ships, freighters, and other ship types currently missing from the universe.

Feedback
I am always open to feedback! Feel free to leave comments here or email me at masternerdguy@yahoo.com. I really appreciate it. Fly safe!

So, will this work on a comp with only 2GB RAM now?

No, unfortunately I am going to say the minimum system requirement is 4GB of RAM. The game itself needs slightly over 2GB to be stable. I had some others look at it, and I don't see how to significantly reduce RAM usage without cutting features. To work on a system with 2GB of RAM, the game would probably need to be using only about 1GB.