Share about the creation of characters in ALIENGINE. Alien pilots concept arts and their 3D models. Video of game over showcase.

Last time we got ideas of enemies in ALIENGINE and now let's talk about the characters controlled by players in game.

Originally, we planned to create one character only for the whole game. However, we found that it will be more interesting to have several characters included in game for players to unlock and play with. Those characters will have their own spaceships with different properties (we make the difference under control which will not destroy the game balance). We will talk about spaceship in the next update and for now, let's focus on our characters.

The main theme of ALIENGINE is clearly about aliens and hence all of the characters in game will be based on different alien species. Although there is no official announcement of alien species, we can still find a lot of well-known aliens on books/reports/internet.

For our first character, he/she must be recognized by public as the icon of aliens. So, which alien is the most famous in our world? The answer is obviously the Greys. They appeared in human record as far as 100 years ago and the controversial crash-landing issue in Roswell in 1947 also boosted their name all around the world. They should be naked in most of appearance descriptions but we decided to provide our Grey character a space suit to enhance the image of spaceship pilot. Moreover, we tried to make our Grey character to be more nice and gentle. Here is the concept art of Grey:

3D-model for the Grey (Fixed the head shape a little bit to make it look like alien more): 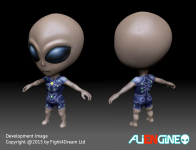 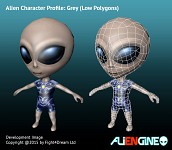 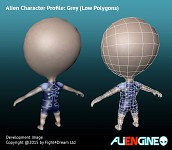 For the 2nd character, you may not know they are actually aliens even if you see them. They are relatively tall with long blonde hair and eyes, which is very similar to human and that's why they were called Nordics. We choose Nordic as one of the character because his human-like face can be easily accepted by players who may not be familiar with aliens. We designed our Nordic with typical features but having a relative serious facial expression. Here is the concept art of Nordic:

3D-model for the Nordic: 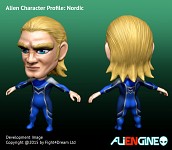 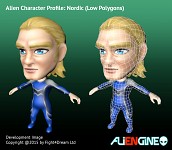 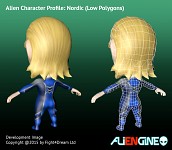 For the 3rd character species, their typical appearance may be a little bit scary to some of the people, were called Reptilians. They are famous of shape shifting and someone said they can be found in underground bases. We designed our Reptilian pilot with features of lizard and tried to make the character not too rogue. We intentionally enlarge the size of eyes to provide some cute elements. Here is the concept art of Reptilian:

3D-model for the Grey (Eyes fixed with more rounded shape with eyelids): 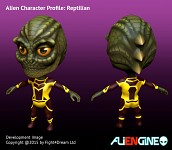 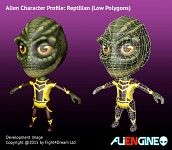 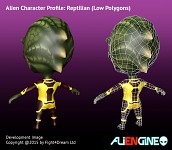 For the last species, you can find statue of them in Point Pleasant area of West Virginia because they have their own festival there. They are moth-like creatures and firstly reported to be seen in 1966. They were called Mothman due to their features: large wings, big red eyes and two legs. Mothman have 2 very different typical images and we tried to combine them into one. We designed our Mothman with no neck section but keep their hands for controlling spaceship. Again, space suit was added for matching our game overall feeling. Here is the concept art of Mothman:

3D-model for the Mothman: 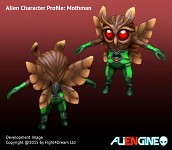 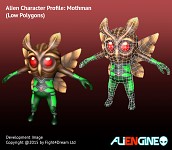 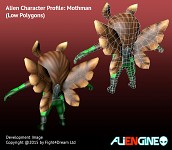 Moreover, we consider each alien species come from different galaxy/planet and should have their own icon for recognition by Galactic Federation. We designed those icons with the reference of their faces and can be seen when player tapping the screen for moving their spaceships. Here are the species icons: 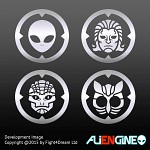 After all, our game should be played with spaceships and you may ask here, why do we need to make the 3D-models for our characters? Yes, it is actually not a must-do section but we want our game to be fun and interesting even in details. We especially added pilot ejection after the spaceship was destroyed. You can see the pilot screaming (except for Mothman because our Mothman has no mouth) after the ejection and hear their voices which were tailor made by us. Check out the short video here:

I hope you all enjoy this sharing on our game characters and we really need your supports.
Don't miss the next news update about our spaceship designs later. See you all.