A dangerous new enemy approaches the Star Ruler galaxy in 0.4.0...

"We are the Vanguard. To fail in our mission is to be exterminated. To achieve this goal before the other races of the Vanguard is to solidify and increase our power and prestige once more."

For some time now, I've wanted to overhaul the Reclusive Ringworlders Alar integrated into ABEM and give them a racial preset. The idea started out as a fairly simple one, gameplay-wise, and there was no plan to influence other races in any way, even backstory: - The modified Ringworlder trait in the trait selection menu.

Eventually, though, the race's backstory spiraled out of control, around the same time I started writing 'Rule of the Stars'. The still-unnamed Ringworlders became part of an incredibly lengthy invasion plan by an extragalactic race of conquerors, who had been thwarted in their last invasion attempt by the Ulthaar - forcing the Ulthaar into stasis (the same stasis that they emerge from in their lore text) in the process.

The Hyperfield Data Collator, strongly influenced by a similar structure (and victory condition, for that matter) from Endless Space, was no longer a means of omniscience; it was part of a massive teleportation system designed to let the rest of the invasion force into the game's little corner of the universe. 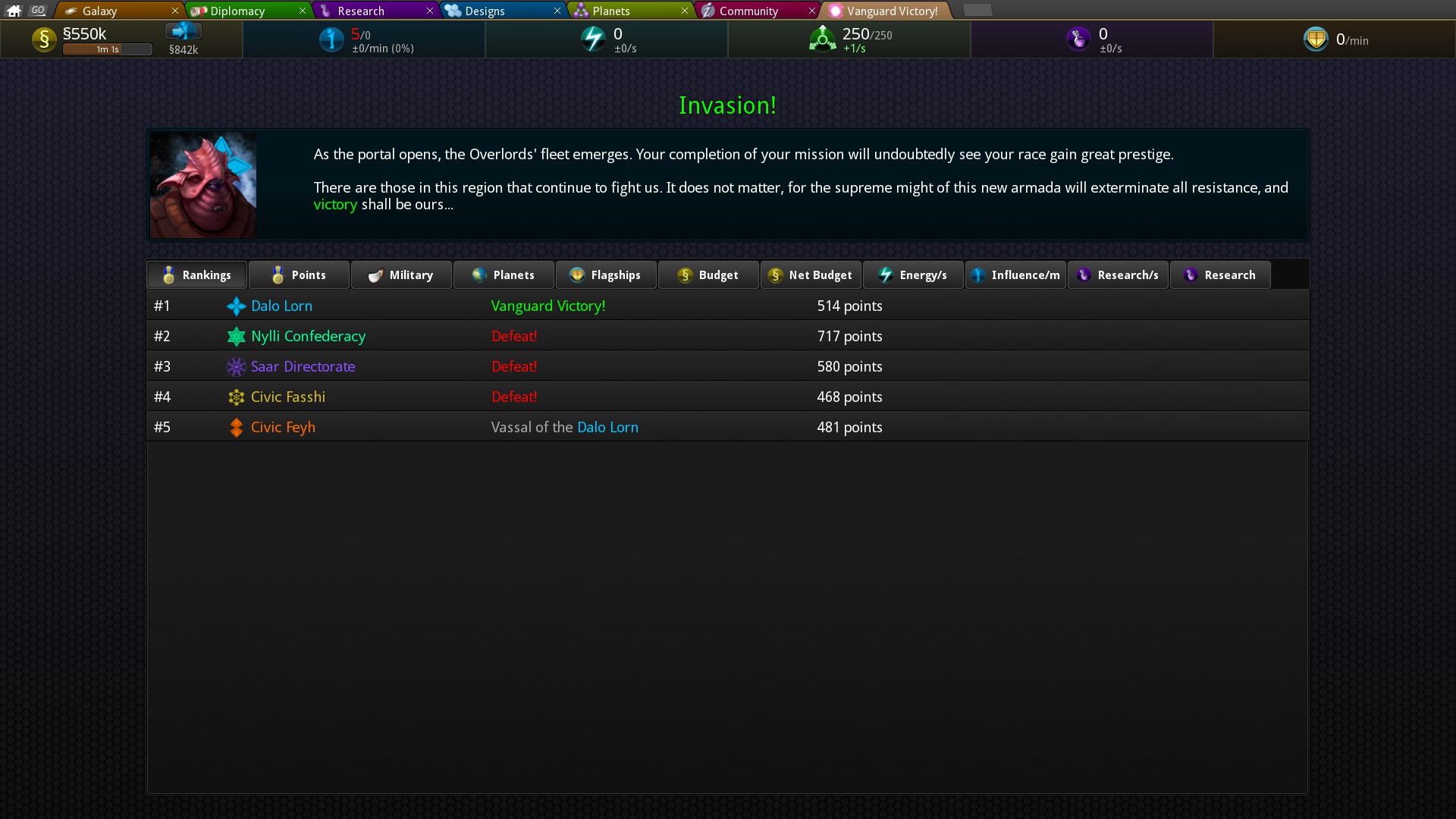 - The Bluuhbi win, incredible cheaters as they are, by magically creating and stabilizing the portal without the five Portal Stabilizers, or the five Ringworlds they'd need in order to build all the stabilizers. >:)

Vanguard races don't really play all that differently from normal races. Well, they do, but not because they're Vanguards, but rather because of their own unique mechanics. A Ringworlder Vanguard would likely play quite a bit differently from a hypothetical Pacifist Vanguard, because the Ringworlders and Pacifists are completely different from each other with or without Vanguard gameplay. (Really, the only difference is that Vanguard races will be designed with an emphasis on some mechanic or another - in this case, stealing resources to feed the Ringworlds - and be capable of building Portal Stabilizers on Ringworlds and Artificial Planetoids.)

The shared objective of the various Vanguards (and the enormous power of their masters) might seem to contradict the above statement at first. Why would parts of such a large invasion force fight amongst themselves when they have a more important task to attend to? The answer is simple:

The Vanguards are not a single race. There are several of them (even without player-created additions to their ranks), each struggling to improve their standing with the Overlords by being the ones to activate the portal or even single-handedly complete the invasion. As the Jem'Hadar might put it, 'victory is life'. (Victory is probably also any variety of pleasures the winning race may want to indulge in, and to the Bluuhbi, that's just as big a motivator as survival.) 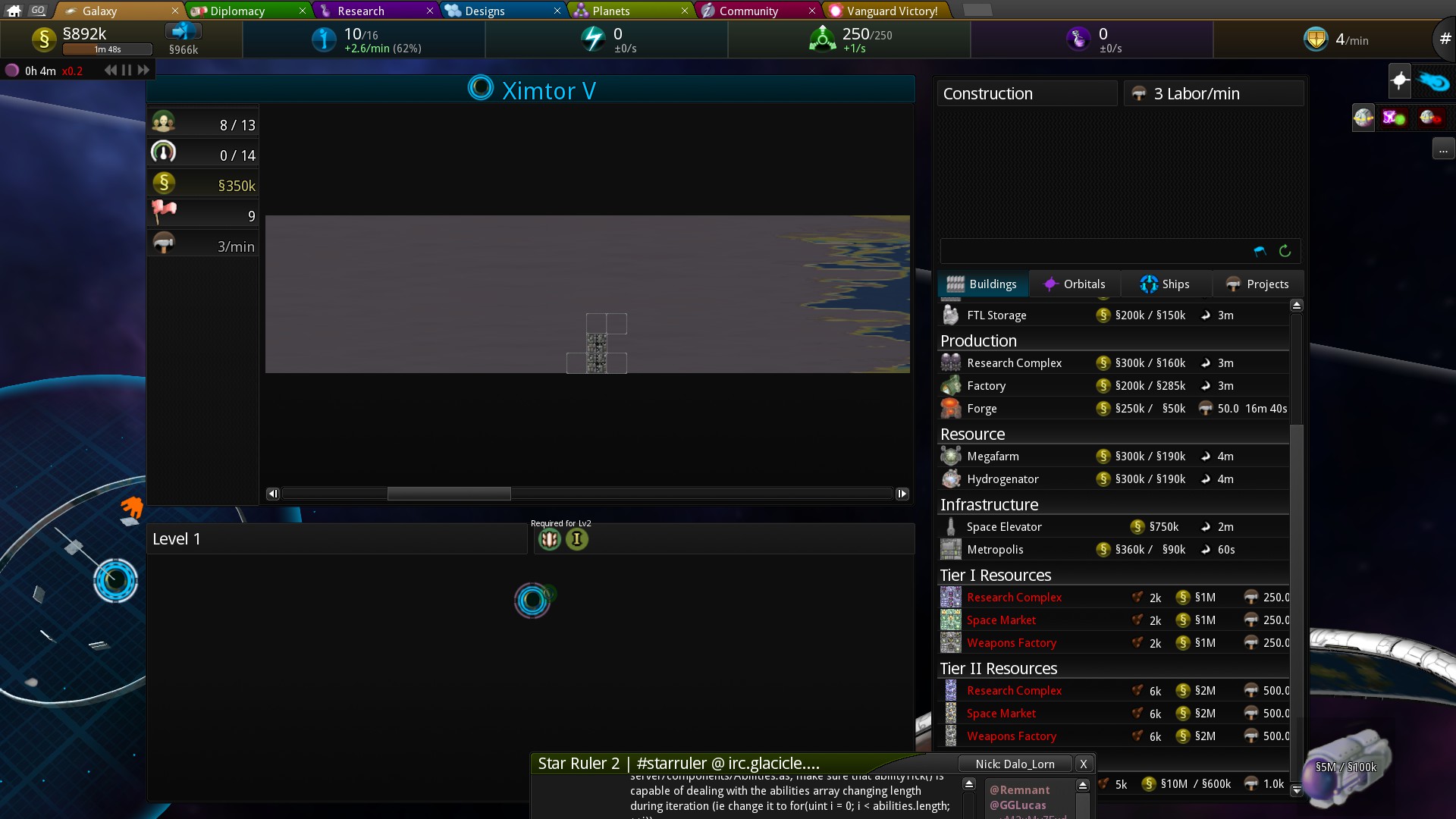 - In the lower right corner, you can see that tile development is a MASSIVE factor in deciding how expensive a Portal Stabilizer can be - from 10M/600k on a fully undeveloped patch to 5M/100k on a fully developed 5x5 patch of land. Oh, and it costs 5k Ore, 1k Energy and 500 FTL to construct!

While I've gone on long enough about the Vanguard, there are some details that need to be mentioned about the design behind the Ringworlder variant in particular. Obviously, yes, they can't colonize or conquer non-Ringworld planets. (If they do get their hands on such a planet, it is immediately abandoned.) That was (sort of) in Darloth's mod already.

But how do they steal resources?

The Bluuhbi build bulky, tough flagships called 'Harvesters', size 500 or higher. These things are expensive, and tougher than the average flagship, but they're nearly defenseless anyway. With only a fraction of the potential damage output of a regular flagship of the same size, and a significantly increased mass, a Harvester cannot defend itself against a serious attack. Worse, it can't hold support ships! 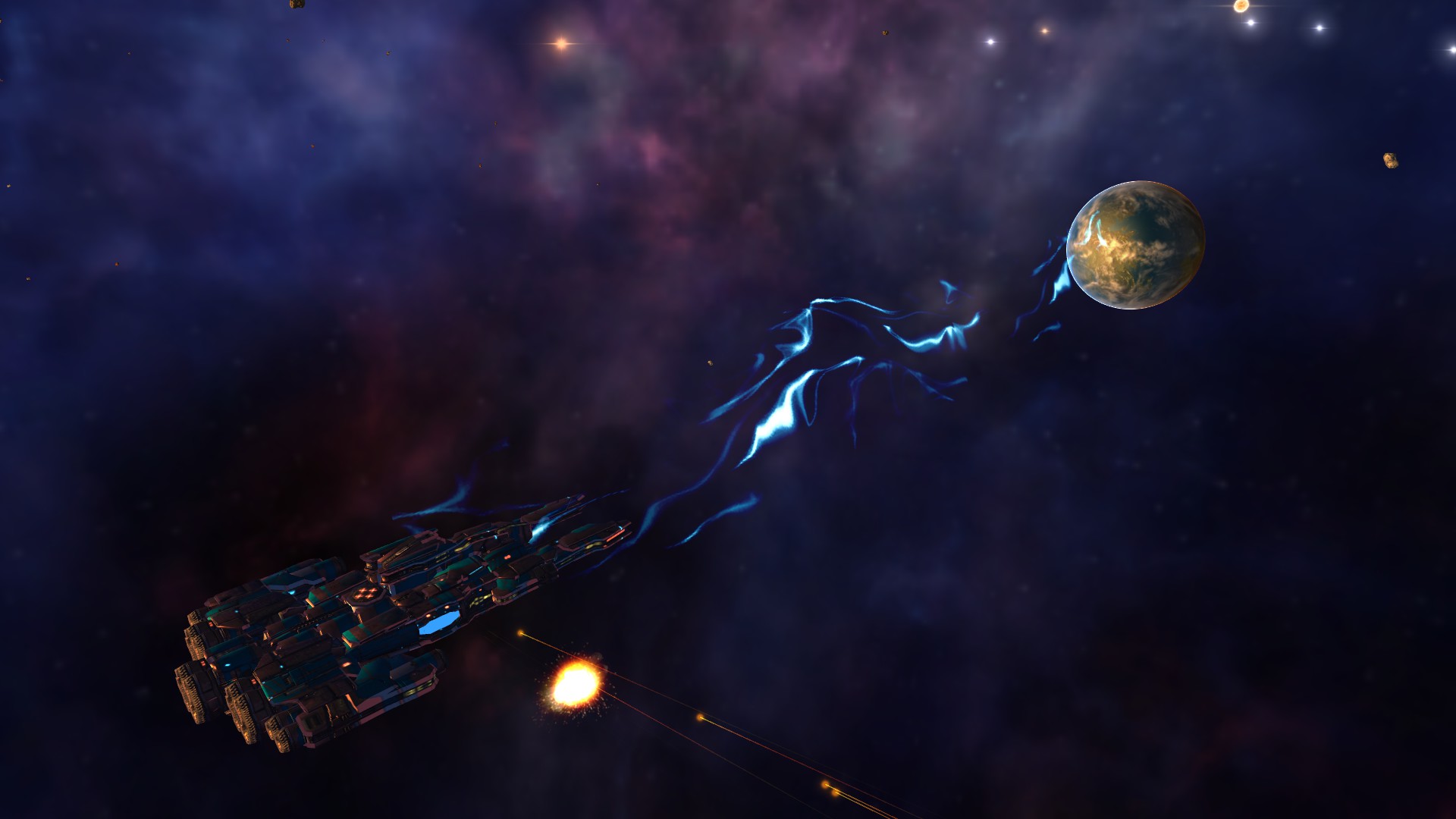 - A Harvester is being bombarded by a Kyllaros (not seen here) as it prepares a planet for harvesting by the Ringworld. I had to spawn four more Harvesters, as the thing's armor was beginning to buckle; that lot subsequently proceeded to use their defensive armaments to wipe the floor with those pesky Remnants.

To allow a planet to be harvested, Harvesters must channel an ability for 6 consecutive minutes, remaining within close proximity of the target planet. Not only does interruption reset the timer, but interrupting or finishing the process causes a 3-minute cooldown, so a powerful escort is vital. Once the process is complete, any Ringworld (belonging to any Ringworlder Vanguard player) can instantly harvest the planet's resources. Only Altars, Hydrogenators and Megafarms are immune to being stolen (also, the Artificial Planetoid and Ringworld resources native to their planet types); anything else poofs and the planet becomes Barren. Additionally, any non-allied planet can be harvested at any time, so a player should try to defend present and future holdings from nearby Harvesters at all times.

The utility of Harvesters is further enhanced by something inspired by the description of Darloth's original trait, which notes this:

"Note: Currently conversion to barren worlds and mining barren worlds for ore is not working. As such, worlds will keep their resource until they explode and then leave asteroids, which will usually have some ore - you will have to mine these as usual."

The resource bit was something that had to be in - it was the whole point of the overhaul. The barren world conversion seemed like a nice detail. Mining barren worlds, however, wouldn't have made it in if that note had gone unnoticed. 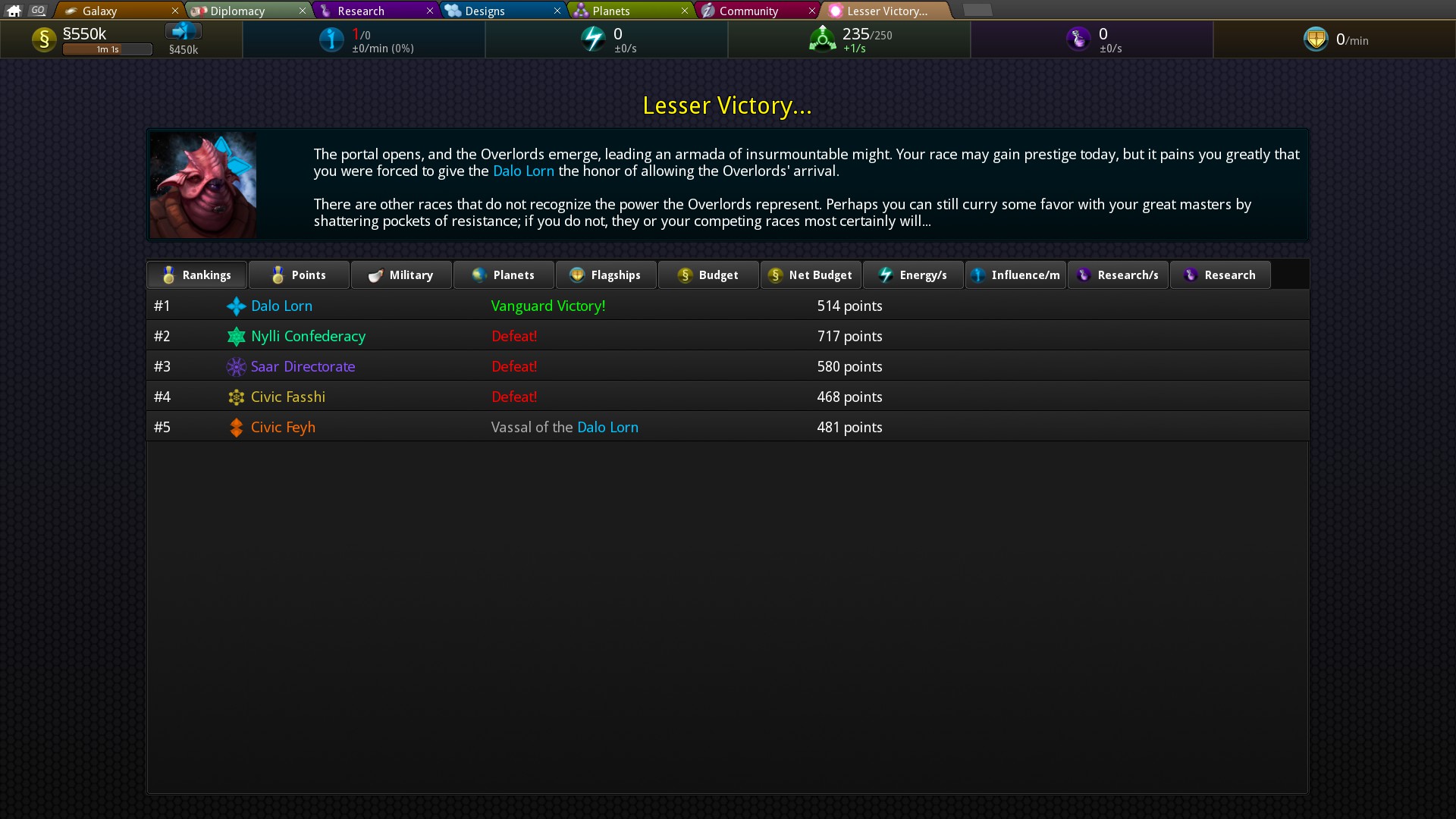 - Those poor Feyh. Tricked (or should I say cheated? :P) into believing they were part of the Vanguard, and then humiliated like this...

Harvesters can be equipped with a special mining subsystem which can target any Barren planet (denoted by a special status as in the base game) not owned by an ally and rapidly damage them, filling up its sizably increased cargo hold with Ore in the process. Over time, the planet will explode, leaving behind asteroids as usual - but you'll get more Ore this way, especially if you manage to go the extra mile and take an enemy homeworld. (The more health a planet has, the more Ore it contributes - every 1G health translates into 2.5k Ore for your empire.)

As soon as all of this stuff is localized and functional (while Vanguard victory has been implemented, Harvesters are broken as of the writing of this news post), it'll be released into the 0.4.0 beta on the Workshop. Needless to say, all of the content here is subject to change, both due to any observations I make or feedback from the beta.

Sort of thought this is that Doom megawad from 15 years ago :)