Current version: 1.2.0 (Coming of the Vanguard)

The current release of the mod contains:

Hey there! Before we start, here's a little context:

I've made no secret of it in the past - releasing updates to ModDB is something I do sparingly, and only after I'm reasonably confident that there won't be any more hotfixes or minor tweaks for a given version of a mod. This can lead to delays as large as a month, with some versions of the mod never appearing anywhere except the Steam Workshop.

Worse, with each patch I have to pay attention to whether any files were deleted or renamed, to determine if I can do an incremental update or require players to redownload the entire mod. This also complicates things for them, because they have to think about whether they need to delete their previous installation or just extract the patch on top of it.

However, it occurred to me that I already have an equivalent of the Workshop, I just don't have a way of intuitively presenting it to people who might not even know what GitHub is, much less how to download mods from it. 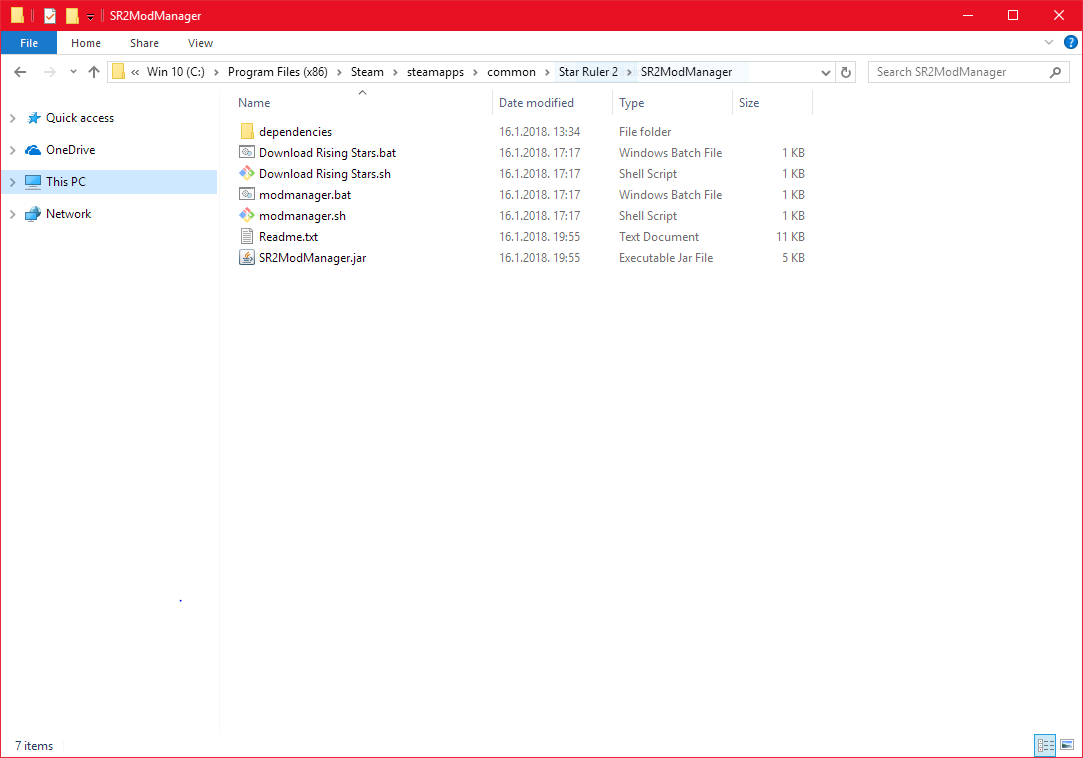 - Not the prettiest of applications right now, but it gets the job done.

Cue the SR2 Mod Manager. Inspired by similar (and simultaneously more and less sophisticated - mostly "more") programs I've seen in the past, it's designed to take a Git repository - any Git repository it can see - and extract the contents of an arbitrarily selected branch into the user's mod directory with relative ease.

At this time, only Rising Stars and a number of Darloth's mods are known to be fully compatible with SR2MM, with no other known Git repositories containing downloadable SR2 mods. Furthermore, the manager itself is in an infantile stage, lacking even the most basic GUI and a number of useful functions (perhaps the most glaring issue is that it downloads the whole repository every time it updates). Regardless, it's functional enough even in this crippled state, which is why I am proud to announce that version 0.1.0 will be released sometime within the next 30 minutes.

I expect to make some updates to it as time passes, especially since we've just started studying GUI code at my college this semester. The GUI's probably at the top of my list, as it'll enable a few other nice bits of functionality throughout the program.

As the kinks get worked out, it's time for another Rising Stars release on ModDB. Read on below to learn more about what's new, or move on to the downloads...

As the last (active) developer goes out, the mod's development is unlikely to continue...

After an excessively long delay, a new patch has come out. Read on for major highlights, or head over to the downloads section to pick it up.

The year is 714 AP. Amidst continuing conflict, alliances begin to form between the many rising empires inhabiting the galaxy. There are whispers of an...

A small, cross-platform tool capable of installing Star Ruler 2 mods from Git repositories such as the ones hosted by GitHub or Bitbucket.

A small, cross-platform tool capable of installing Star Ruler 2 mods uploaded to online Git repositories, such as the ones hosted by GitHub or Bitbucket...

Rising Stars version 1.2.0 (Coming of the Vanguard). Made for Star Ruler 2 version 2.0.3. Full version, does not require previous versions.

Rising Stars version 1.1.1 (Return of the Ulthaar). Made for Star Ruler 2 version 2.0.3. Full version, does not require previous versions.

That was quite the hiatus.

To be fair, it was shorter than I expected. :P

We're back in action, and 1.2.0 is just around the corner! I still have to write up the ModDB news post, but in the meantime: Patreon.com

Great work. I love the mod. I noticed there is a bug in the file DestroyerHull.txt ... according to the description after mod activation the hp bonus of the destroyer hull should be a bonus of 200% ... so 3x .. but in the file it is still 6x ... I just checked it after I tried the destroyer hull and wondered why my destroyers could simple rape the enemy. I fixed it in the file "Rising_Stars_1.0.1\data\subsystems\flagships\hulls/DestroyerHull.txt". It works well for me and it gives other hulls a reason for existing again.

I hope it will help to improve balancing for others as well.

Just uploaded a batch of screenshots from 0.5.0. Development is going along fairly slowly, I'm afraid, but we're still alive... ish.

How do you install this without steam?

The instructions in the download descriptions should be pretty straightforward? (If not, please let me know so I can fix them. :()

3 (optional). Start the game up now, to see if you've properly installed it. You should know it's working when you see it, the game will pop up a mod selection screen before taking you to the main menu.

5. Extract the contents of 0.4.1's .zip into your ABEM folder (whatever it's called). If prompted to overwrite files (and you should be prompted!), overwrite everything.

6. Start the game up. If you haven't already done so, enable ABEM. If you have 0.4.1, you should see a pretty long bit of text in the lower right corner of the screen, telling you you have 0.4.1 for SR2 version this-and-that, yadda yadda.

7. Enjoy your game. Or come back here to tell me my instructions still suck. :o

You shouldn't need the 'Hotfix for ABEM 0.4.0', that one's been bundled into the 0.4.0 download immediately upon its release. I just released it separately because some people already had the broken version.

This mod is getting better with every update!

The same cannot be said for the size of the dev team. :P

Doctor Who Mod for Stellaris Stellaris

Beyond The Relays - A Stellaris Mass Effect Mod Stellaris