Development of Alien Arena 2009 continues to move along with major new enhancements and content.

Alien Arena 2009 has been developing at a very steady pace, and we have already some previews of what is to come. In the last two releases, the CRX engine has received some extensive improvements, and this release will continue that trend. All surfaces now use GLSL for per-pixel effects, and several portions of the basic rendering code have been rewritten to accomodate this, as well as improve performance. There are a vast number of engine improvements that are already completed, and quite a few more to come. Content is also a major portion of our focus, and we have completed several new maps and player characters, with much more to come. We expect to release the game in June, so keep an eye out as we are planning to raise the bar as high as we possibly can with this version of Alien Arena! 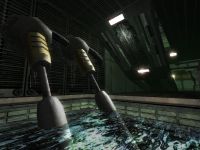 Great update.
Downloading and tracking this one, I can't believe I am just finding out about this one ;)

If you use SVN you can get the latest GLSL stuff and some of the new content that is near complete, or semi complete. It's so worth using SVN over standard install. URL is Icculus.org

I love this game!I can't wait to see more of whats to come!

I'd say that the "performance improvements" need a hell of a lot of work. I just compiled the SVN and I still get FPS drops left and right. I can run Nexuiz on Ultra with less problems than this, which has always been a thorn in my side as far as Alien Arena goes: poor performance and lower-quality visuals. Still, keep up the good work!

What are your specs? I have a 9800GTX on a dual core 2.8ghz, which IMO is a pretty modest rig, and the game runs very comparably, if not faster than Nexuiz when both games are set on their highest settings(or at lowest as well). At this point the engines are very similar in what they do overall, and not to knock Nexuiz, but AA's media is much more intricate and detailed. Any feedback is appreciated, it's always good to have people test this stuff so I can find where performance drops may occur. Knowing your specs might help me determine where problems may occur for your specific chipset.

I can say that on my modest rig, as well as on my laptop running a ATI XP1400, that on the highest settings(which has per-pixel lighting on all surfaces), that the game went from being fairly unplayable to actually being something that I leave it on 99% of the time even during large FFA matches. It's amazing how much faster that GLSL is than fixed function Opengl, and how much you gain from rendering meshes with GL_TRIANGLES rather than GL_TRIANGLE_STRIP(though we left legacy code in for unfortunate souls with pre-2003 era cards than need this).

Still no real mac support?
nice to hear the games doing well though.