A profile of the two main characters in the series.

Today I'll be giving everyone a look at the two main characters in the series - clone troopers CT-9/5262 and CT-5/6405. By all appearances they are no different from any other clones, with pristine white armor and only numerical designations for names. However, these two ordinary troopers are in for some extraordinary experiences. Players will follow the stories of these characters and experience the war for Aldura through their eyes. 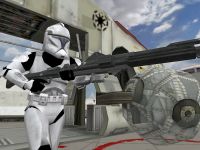 Private CT-9/5262 enters the Aldura Campaign as a rookie fresh from training. The battle for Aldura will be his first true combat experience - up to now, he has only fought in the relative comfort of simulators on Kamino. Despite his inexperience, '62 is assigned to the 81st legion, the first group of soldiers to land on Aldura's surface. The battlefields of Aldura will push '62's training to the limits - if he can make it past his first day. 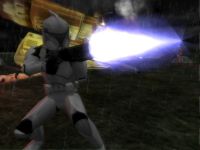 Like CT-9/5262, CT-5/6405 lands on Aldura as a rookie. While '62 is sent to Serena, '05 joins the 125th legion on Alda. He bonds easily with his comrades and quickly becomes accustomed to war, but any comfort this may bring is sure to be short-lived. Alda quickly gains a reputation for holding the most brutal fighting, with casualty rates skyrocketing. As the fighting drags on, '05 must fight with all his will just to survive.

Unfortunately, this may be my last update for a while. I'll still be around though to respond to feedback or answer questions, so feel free to continue posting any comments or concerns!

Why did you feel the need to create two separate characters for the campaign?

If it is because the maps take place in different continents, I do believe it's possible they could be relocated in a matter of days - or even hours - thanks to their fast gunships.

Anyway, I look forward to playing as six-two and oh-five.

And in terms of military tactics, it would be completely impractical to constantly move units all over the place on a daily basis.