Posted by AgeofChivalry on Jul 1st, 2009

Age of Chivalry Toe-to-Toe is the 2nd major update to the first person online medieval combat game "Age of Chivalry" since being released on steam and it throws the player into the fictional world of Agatha where the Agathian Knights and the Mason Order are in a blood feud and neither side will yield. In true medieval fashion players can unleash detestation upon their foes with a variety of vicious medieval weapons including mighty battle axes, curved longbows, massive siege weapons and much more. Supporting up to 32 players online in objective based combat, Age of Chivalry, Toe-to-Toe is an experience no medieval or FPS fan can pass up.

This update to the game focuses heavily on the core combat system, swings come faster, parries are more effective and both reflexes and strategy play an important role in defeating your opponent. Reach, angles and evasion are the tools each player must fight to use to their advantage in a flurry of exchanges and transitions that have a constant smooth and violent flow. Combat isn't about trading blows or sprinting around, anymore. It's about controlling distance, timing, countering, and maneuvering to ensure your blade lands flush, while also ensuring your opponent's advances do nothing but work to your advantage in tiring him out. Combine this with the new environments and focus back on objective based play being introduced and you have a whole new set of skills and reactions to master if you want to be at the top of the scoreboard in this version.

Mighty warrior, you have fought many battles and wars with me as your guide through these troubled times, but a war is coming, a war that shall bring great peril to our shores and our people. You have always stood above the others, many a time I have seen you carving a vicious bloody path through the enemy so violently that you surely have turned the tide of battle for us more than once. But a new age is coming, an age where strength and bravery is no longer enough to attain true glory on the battlefield. You must choose wisely my friend how you develop your skills on the field, will you be a merciless berserker that unleashes his rage on his opponents in a flurry of powerful strikes while leaving himself open? Or shall you be the swift and agile counter attacker who patiently waits for his opening... Either way my lord, other warriors will make decisions as well and their fighting style will force you to adapt your own and overcome your opponents with a mixture of defensive maneuvers and offensive onslaughts that push your opponent to the brink. 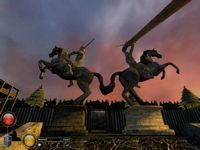 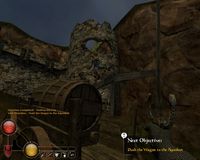 This age shall bring an end to the warriors of old, but a rise to those who can truly conquer the new combat styles that are emerging, young warrior, many a times have I stood by you when it looked as though all was lost, and today I stand beside you still, but I stand beside you with a warning. These are dark times, there is much glory to be had but never before has it taken so well rounded a hero to overcome the odds of battle. Fight smart, fight hard and kill without mercy. My lord, take up your sword and trample all that oppose us, for this is the Age of Chivalry and only the valiant shall survive!

- New movement system dubbed "Toe2Toe" seeks to eliminate hit and run combat and bring the action in close
- Heavy animation alignment and scripting rewrites that speed up the pace of combat and reduce waiting times in-between actions to smoothen transitions and combat actions
- Added enhanced pushback to weapon attacks, promotes use of reach
- Improved parry and shieldblocking detection code
- Enhanced bonus for successful parry or block
- Standardized all parry animations to 1 second, 0.85 seconds will be active, meaning there is a window to strike an opponent who is parry spamming
- 3 new maps:
- aoc_galadan - Snowy campaign map that is the prelude to aoc_siege
- aoc_meleefields - Simple team deathmatch map
- aoc_fightpub - Team deathmatch with a twist, fists only in the pub!
- "Injured effect" - Briefly slowed to 50% movement speed after being struck (includes "stopping power" for projectiles)
- Added Impact effects - Camera will jerk and screen will smear in blood when struck
- New first person death cam - Experience death like never before, slam into the ground or be battered and thrashed all the way down a hill
- Added unique hand models for each class
- Full HDR support on most maps (excludes battleground and galadan)
- Massive amounts of readjustments to previous maps, introduced many new objectives and improved gameflow, reduced movement distances
- Points for completing and/or defending objectives
- Added "Objective Indicators" that toggle on and off with default "b" and display the location, distance and task required to complete an objective
- Over 300 new statistics being tracked and incoming (a few days) support for them to be displayed via steam community
- 25 new Achievements
- New records system, lets you track your best rounds, similar to TF2
- Introduced aoc_options menu that allows you to customize performance and gameplay options (ex. "multi-core", "cheap water", "disable minimap" etc...)
- Improved headsmashes to only occur when a blunt weapon deals more than 30 damage OVER what is required to kill a player, to the head.
- Headsmashes now spawn bloody chunks including eyeballs and ears
- All projectiles including thrown weapons, arrows and catapults now "hiss" by your ear on near misses
- Added information on playerclass menu about weapon stats
- Streamlined code, reduced polycounts in models, created more LODs for models, optimized maps, improved performance
- Fixed instances of "mega-lag" that occurred on theshore and after breaking the statue on sorrow etc...
- Added much stronger code support for parries, deflections, attacks and the animation transitions to address issues of animations not displaying
- Increased oilpot damage to an actually useful amount
- Weapon damage, speed, and range adjustments for balance.
- Improved map ambiance
- Fixed players floating while lit on fire
- Fixed pushable objectives sometimes "ghost moving" on their own
- Fixed flags sometimes bugging out and raising themselves
- Numerous other bugfixes, adjustments and tweaks.

Age of Chivalry is a HL2 MOD and requires an active STEAM account and a source-based game to play. If you meet these requirements, download the game via steam here: Store.steampowered.com

Awesome, caught STEAM downloading this yesterday. Can't wait to get in and play :D

LOL I was playing this lastnight xD

Alright! Been waiting for this. Looking forward to trying it out!

Nice update team!
Glad to see the combat system is a little quicker and smoother. I'll give it a shot and post some feedback.

Awesome! It's about time this great content was added. :)

Latest release is causing my machine to hang.

Black screen on launch and no control of system.

Yes, if you haven't done so, update the Age of Chivalry Dedicated Server too. that fixed it for me.

I am now a fan again. The gameplay was extremely improved by the developers.

alot of player finding there fps have gone down to 15 a sec lucky i am oky :)

Yeah, in the last update, they really messed up performance. I had gone from 60FPS to 38FPS, but now it's back up thar, but still, damn.

Sergeant does more damage then a Man at arms, has more armor and hits faster. Almost runs as fast. It is practically impossible to win in a 1-1 against sergeant now if the sergeant is not retarded. They can get you 4 times before you can even hit them twice.

Use a shield. And no, he does not do more damage. Per second maybe, but if you use a shield with immediate counter attacks, you should be fine. Stab is preferable if you can hit reliably.

Some of the maps could use some work, but you're definitely on to a winner, here. :)

Great update! Although, there is a small bug where the 1on1 feature activates when you take damage period, even from falling. Its either that, or just the icon shows up.

does the game have a faster pase yes?

Yes, the time inbetween actions, that is how fast your can combine attacks, parrys and evasive maneuvers has been reduced to allow reflexes to play a bigger role.

I've noticed that this mod really hates being alt-Tabbed. No biggy, but I thought I'd put that out there anyway.

That's been a known issue for a while now, Mars_3K. Let me quote you an old post of Wraiyth's (one of the Team Chivalry coders) from the AoC forums about the problem:

"Yeah, unfortunately this is an engine issue due some underlying ugliness in some of the graphics reloading code, and by complete luck we've managed to find a call path that exposes it more. We've contacted Valve about it and we've been told that it will likely be fixed one day, but no idea when. The only workaround is to not alt-tab and not change resolution while in a map :P"

So, if you really need to switch away from AoC without actually quitting it I suggest you play in windowed mode.

i love the fight pub. i made a bunch of bot and nobody but me even went inside. so i went outside and punched them down with axes and spears and swords and flails and hammers :D.

I think you ruined the game with this update, it makes it seem faster and lighter, thats not what the game was about, it was about a fun, realistic experience, which you don't see often. Sadly, you ruined it with this new update, now it feels like a slow paced melee fps, like half life with just a crowbar.