Talking about enemies appearing in ALIENGINE. With concept arts and idea about designing those enemies in game.

We have gone through the basic actions and 4 special abilities in the previous post. This time we would like to share about enemies appearing in ALIENGINE.

First of all, why should we add enemies in our game?
For standard dodging game, it's normal to put a lot of obstacles and that's it.
However, players in our game are able to attack and it sounds interesting to find something opposite to it.
Yes, that's enemy which will actively attack the players. These enemies again provide even more variables in game and their combinations with obstacles will always form a very exciting situation.

For next step, what kind of enemies should we consider?
We have several ideas such as laser beams generators, EM wave traps, rock-like bombs,...etc.
However, some of the enemies may be overpowered and some of them cannot perform well with lots of obstacles around. Finally, we got 3 different enemies in our final decision and each of them have its own characteristic attacking model.

They are: Space Mobile Bomb, UFO controlled by A.I. and Unidentified Giant Creature.

Space Mobile Bomb:
We want something keep floating and moving around the space slowly, but dangerous and explosive.
If player getting close to the bomb, it will be immediately activated and explode after short time.
Yes, we want our players have the chance to escape from the deadly explosion but players need to react quickly. Here is the concept art of SpaceMobile Bomb: 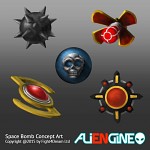 1st design on left-hand top corner is typical but it may be too dark to find them out in space environment.
2nd design can be seen easily but our game is somehow in a 2.5D-viewing angle, the shape may not look good in some directions.
3rd design in the middle looks like something belongs to human which does not match our game theme.
4th design at the left-hand bottom actually looks good but we got another items with similar color.
5th design at the right-hand bottom seems balance all the needs and we decided to take it.

3D-model for the Space Mobile Bomb: 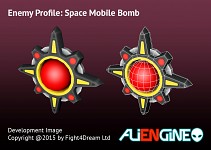 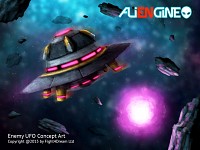 We selected traditional disc-like UFO design to consolidate our game theme which is alien related.
Originally the lights of UFO are all in red color but we don't want players getting confused with the Space Mobile Bomb lighting. 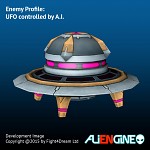 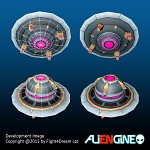 Unidentified Giant Creature:
We want something really big and horrible. We hope that it will scare all players when they firstly meet this creature. Pressure was built when players hear its thunder. We make this giant creature invulnerable and there's only one choice left for players: Run (fly away). Here is the concept art of our Giant Creature: 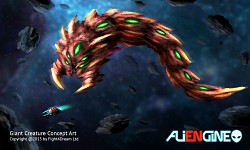 We designed the creature looks like a combination of big bug and dragon. There are some twisting motions on its body which will increase the attacking effective area. They will crash in like a train with different unexpected angle. Certainly, they will roar before going in and skillful player should have enough time to prepare their next action. 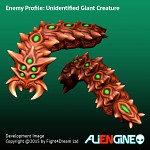 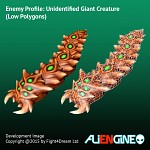 Let's watch our enemies showcase video for their actually outlook in ALIENGINE:

Don't miss our next news update in the nearest future. See you all.