Post news RSS A year and a half later, back on Greenlight

After being Greenlit in April 2015, Blood Sweat Gold is back on Greenlight. It's an odd situation, let me explain. And let me show you the game.

Posted by BloodSweatandCode on Jan 13th, 2017

In December 2015, I scrapped the entire design and a half complete game and went back to the drawing board. Originally, this was a traditional hex based tactical RPG, along the same vein as a Final Fantasy Tactics. And that was the problem. At core, the game didn’t feel like much more than a crappy version of a thousand other turn based games. It didn’t really do anything new or different.

A year later, I finally have something that I believe is really good.
But I didn't feel it was right to launch under the same Greenlight campaign I ran over a year ago. The game has changed far too dramatically and almost nothing from the original remains.

This tavern hiring scene is more or less the only thing that survived the redesign,
and it's quite improved. 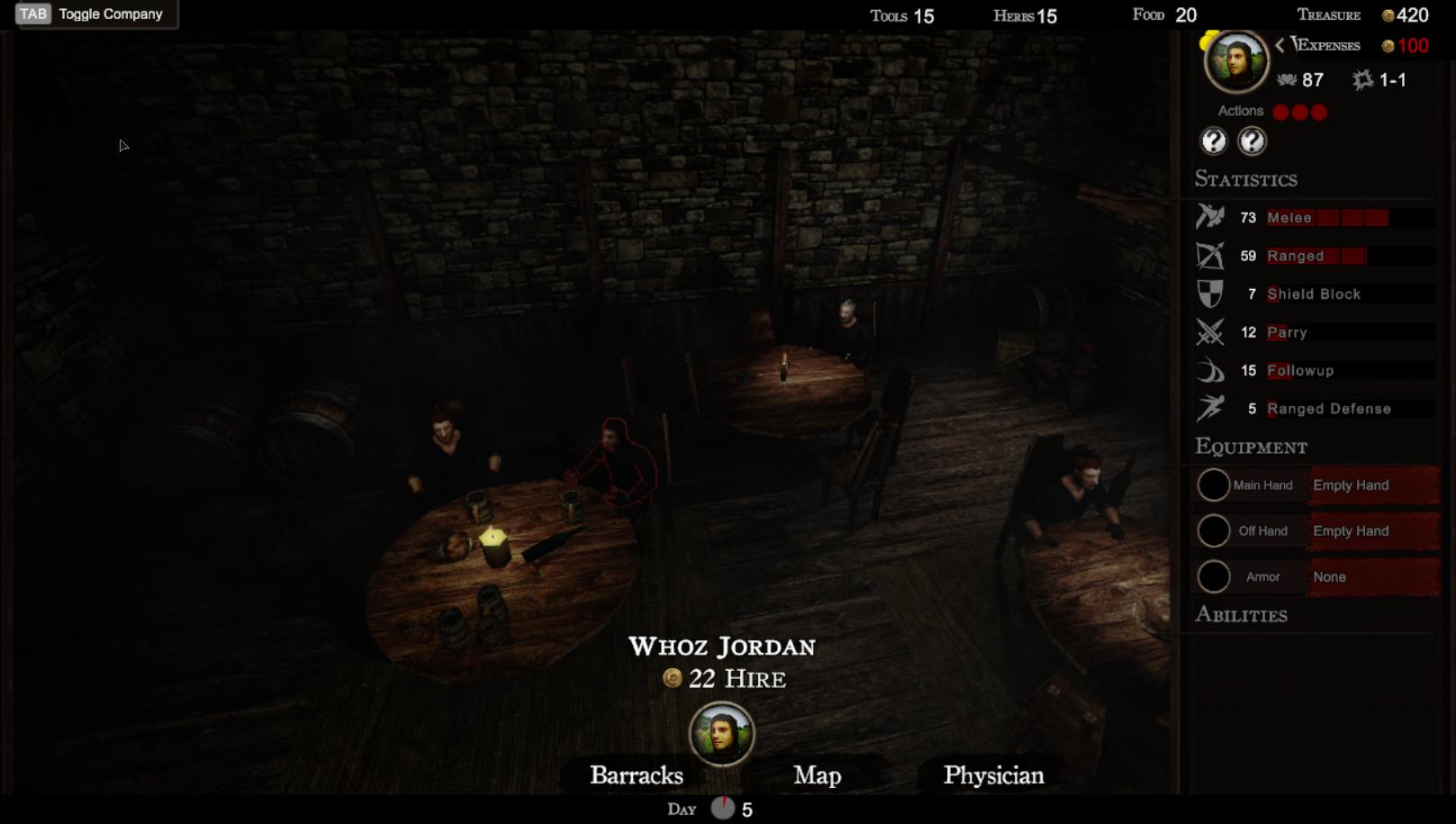 A solid foundation in combat: hybrid Real Time + Turn Based

Divinity Original Sin boasts one of the most innovative designs in RPG gaming I’ve ever seen. Most people think of the elemental combat system as their main innovation, and it is truly amazing, but DoS has smaller fundamental innovations beneath that, a combination of:

It’s surprising how few (western) turn based games opt for the Gridless map, but there are very real complications and compromises that arise from it. The way that exploration seamlessly transitions into turn based combat in DoS is elegant, and the gridless system meant that they could build a rich world, with rolling hills and rich environment.

Something about movement in DoS felt liberating because of the map. I felt liberated, free to make my own choices unrestrained by squares or hexes.

I tried to take that feeling of freedom and lack of restraint to the next level. 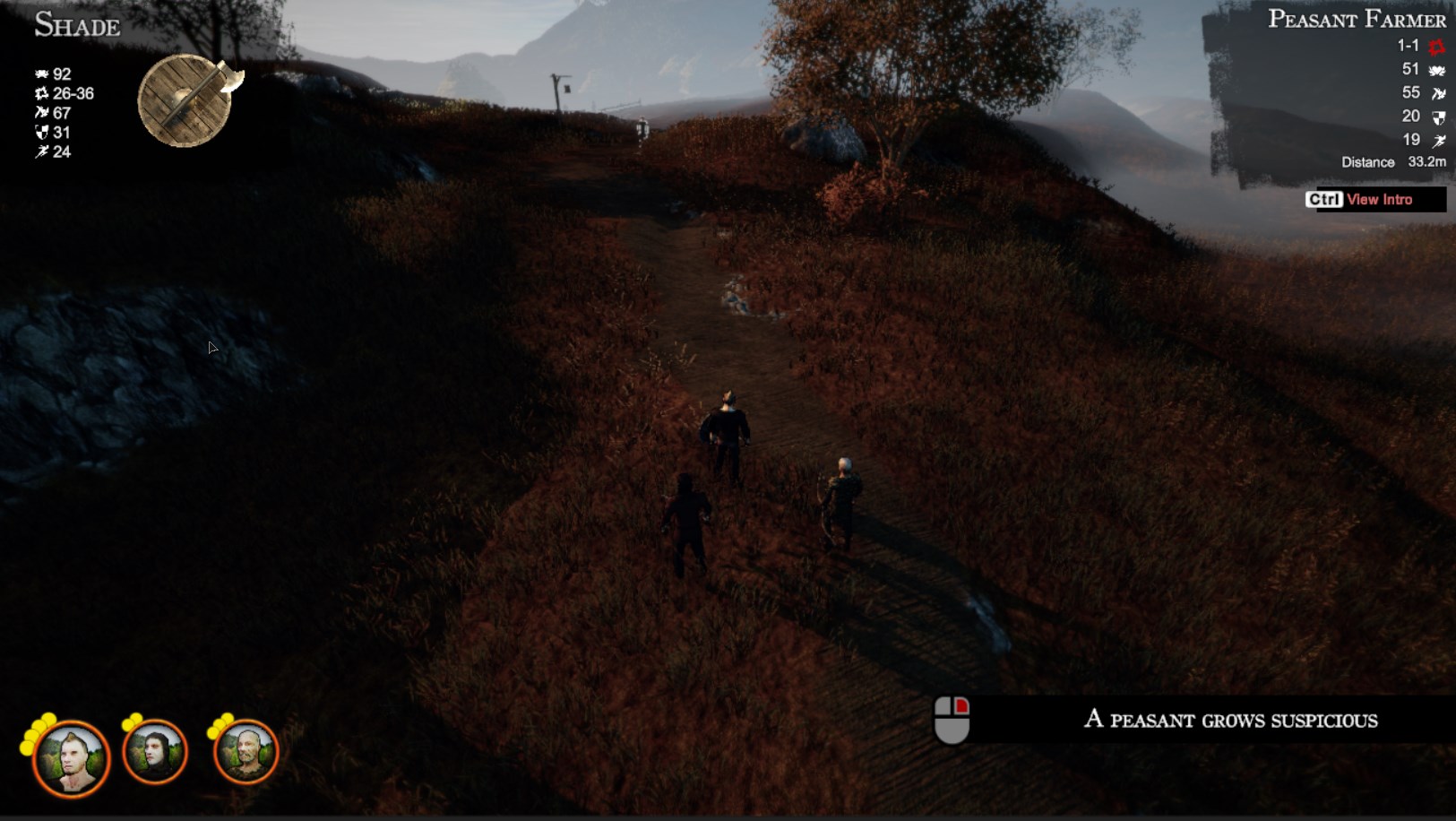 A zoomed out camera in real time mode​ 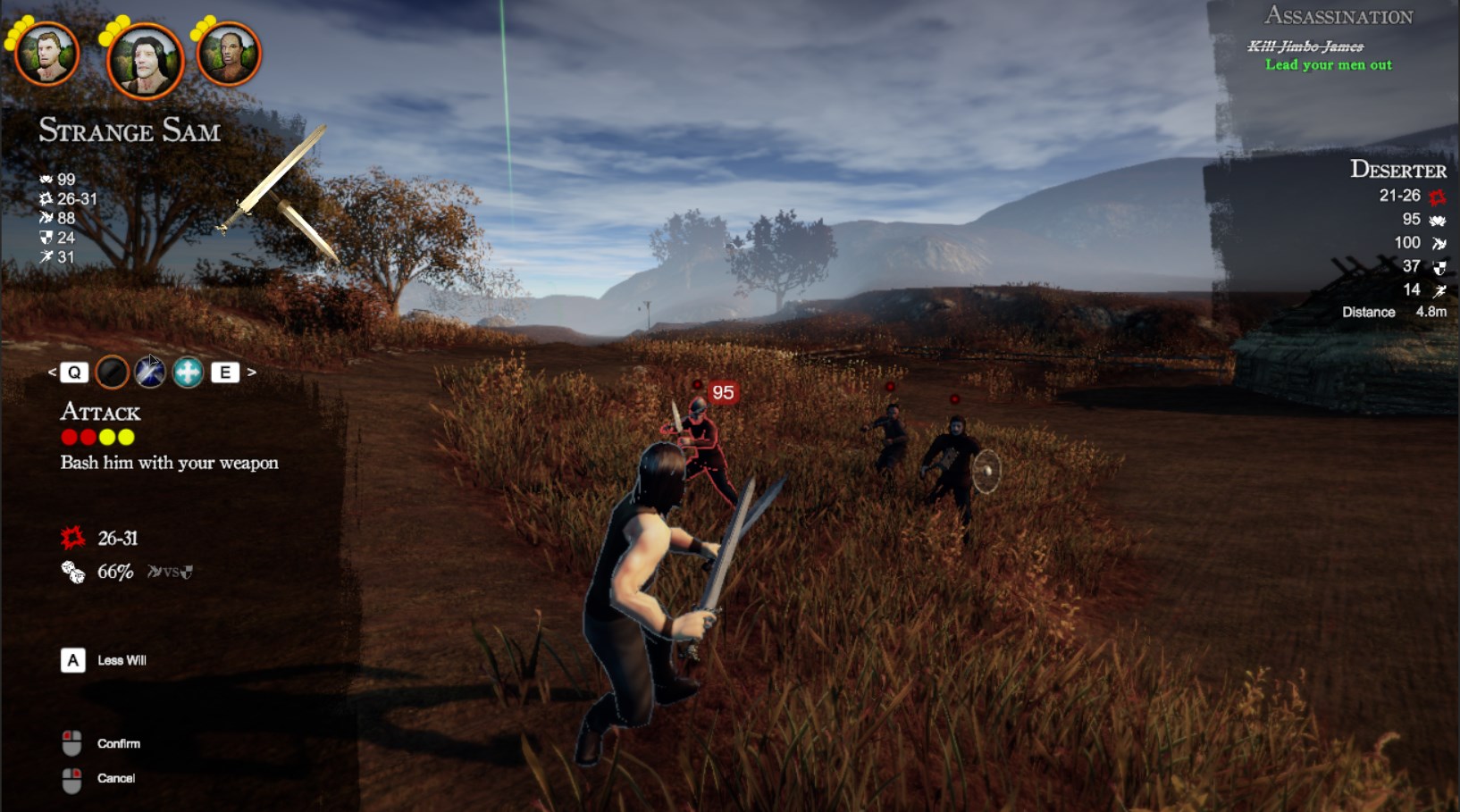 Close up and personal​

Analog controls keep the player directly to his characters

Mordheim, City of the Damned was my main inspiration for the analog style WASD controls and use of 3rd person camera, Valkyria Chronicles also played a huge role in designing core system, and of course the Firaxis' XCOM reboot in changing the sensibilities of turn based games in general.

My goal was to make turn based combat into something more visceral, more immersive and more fluid than you generally find in western turn based games.

Turn Based Mechanics are kind of Surreal

So I tried to build in a subtle, but surreal visual representation of time

I believe that turn based game designers have taken for granted the fact that most turn based players accept the bizarre mechanics of turn based movement. “You go, I go, you go...”. I felt that it was important that we as a genre start to address the idea of how time works.

But, truth is, time in turn based games is a very odd beast. You cannot truly make sense of the mechanics involved without really getting into crazy super hero stuff. So I compromised.

My approach then was not to entirely freeze time. Instead time is presented in a warped semi surreal state. Wind still blows through trees and grass, characters are allowed to move very slightly, but will often be frozen in place. I apply a partial desaturation to the camera.

It's hard to tell here, but the primary character is moving his head - time isn't totally frozen

Peasants frozen in place as they flee​

Manipulating animation and 'time' like this was technically challenging
The development of this system was surprisingly technically complex. Animation is run using Root Motion 100% for movement, and handling very rapid shifts in animation speed along with navigation, animation, and responsiveness to attacks and other events got very tricky very fast. 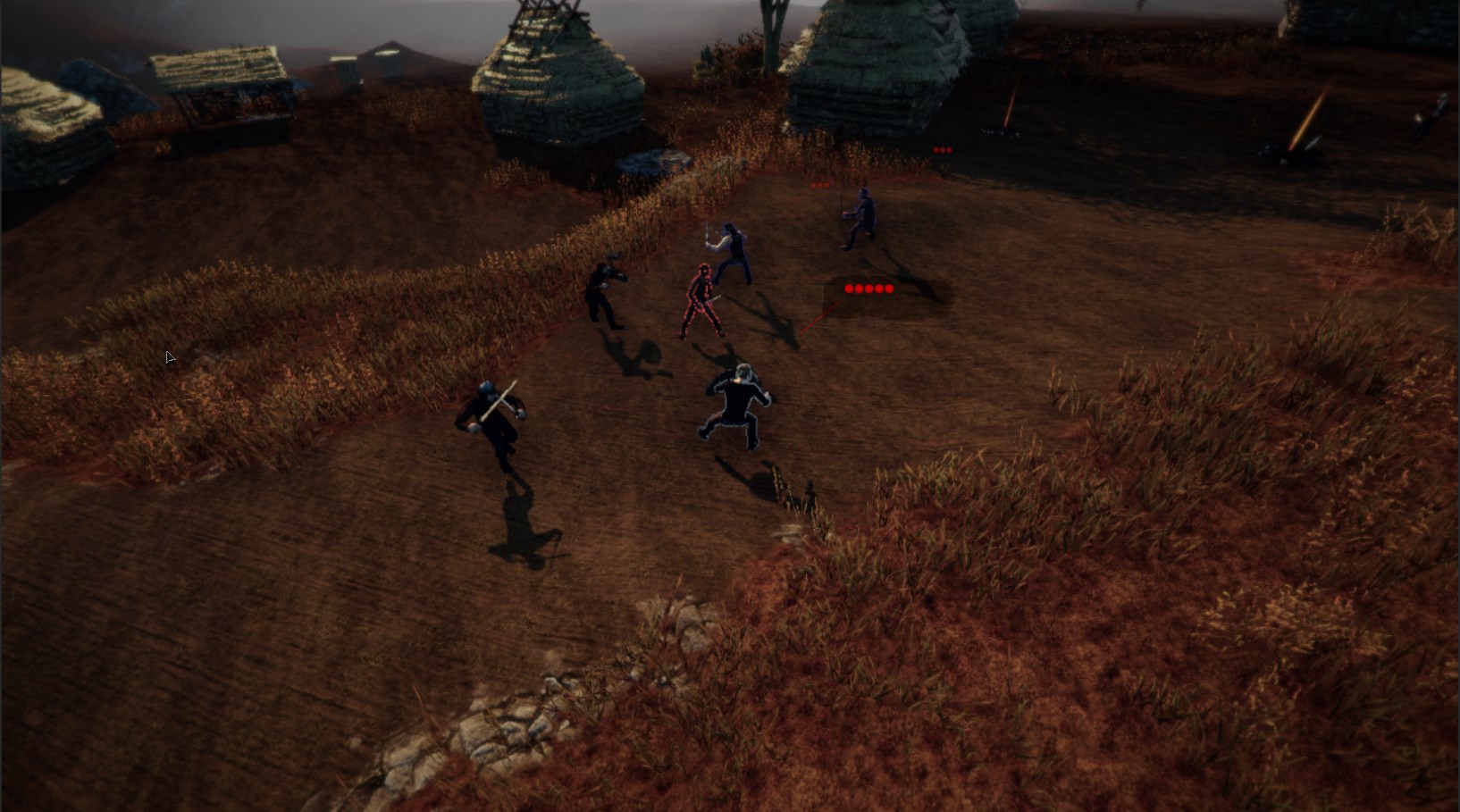 AI movement had to run simultaneously in order to keep consistent with 'time'
The player still needs to be presented critical events, like when they're getting attacked. So these attacks and other critical events are clearly presented and never interrupted. 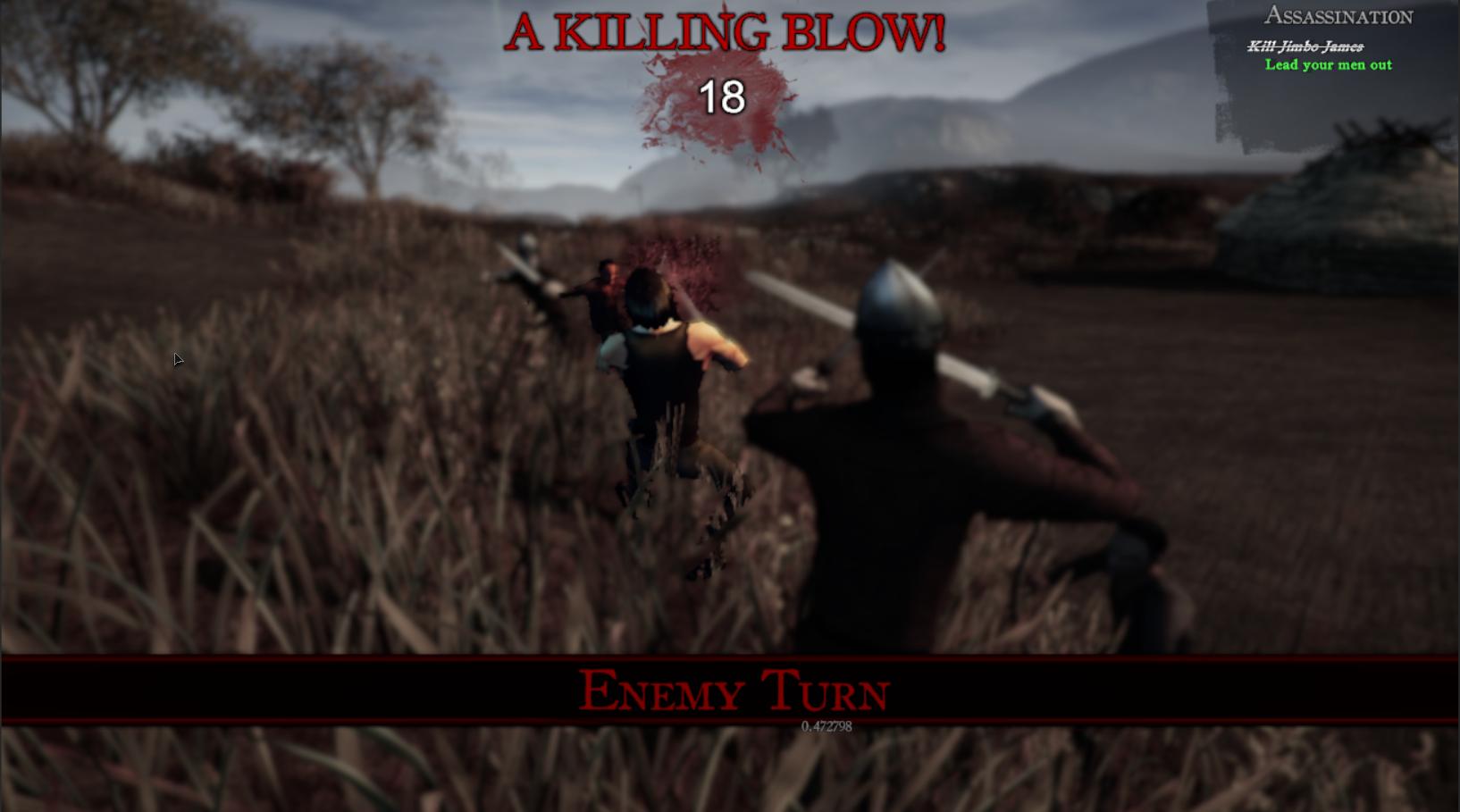 A side benefit of implementing AI this way is that the game can support engagements that are huge by turn based standards. I can introduce large scale combat in a way that I've never seen done in turn based gaming.

Here's an early prototype of a mid scale AI vs AI battle running in real-time:

Very few turn based games are capable of presenting these kinds of scenarios because the turn time becomes absurdly long. I haven't had a chance to build this functionality into actual scenarios yet, but it's a huge area to explore, with potentially great gaming moments.

Combining all of this together in a turn based game posed real challenges.

Traditionally, most turn based games have very limited viewing areas. By allowing full real time movement and turn based combat with a camera that can be dropped over shoulder, there were problems.

Originally I had hoped to follow convention and dramatically limit the players view, I did research on Fog of War systems, and experimented with some very strange ideas.

None of those ideas worked... at all. 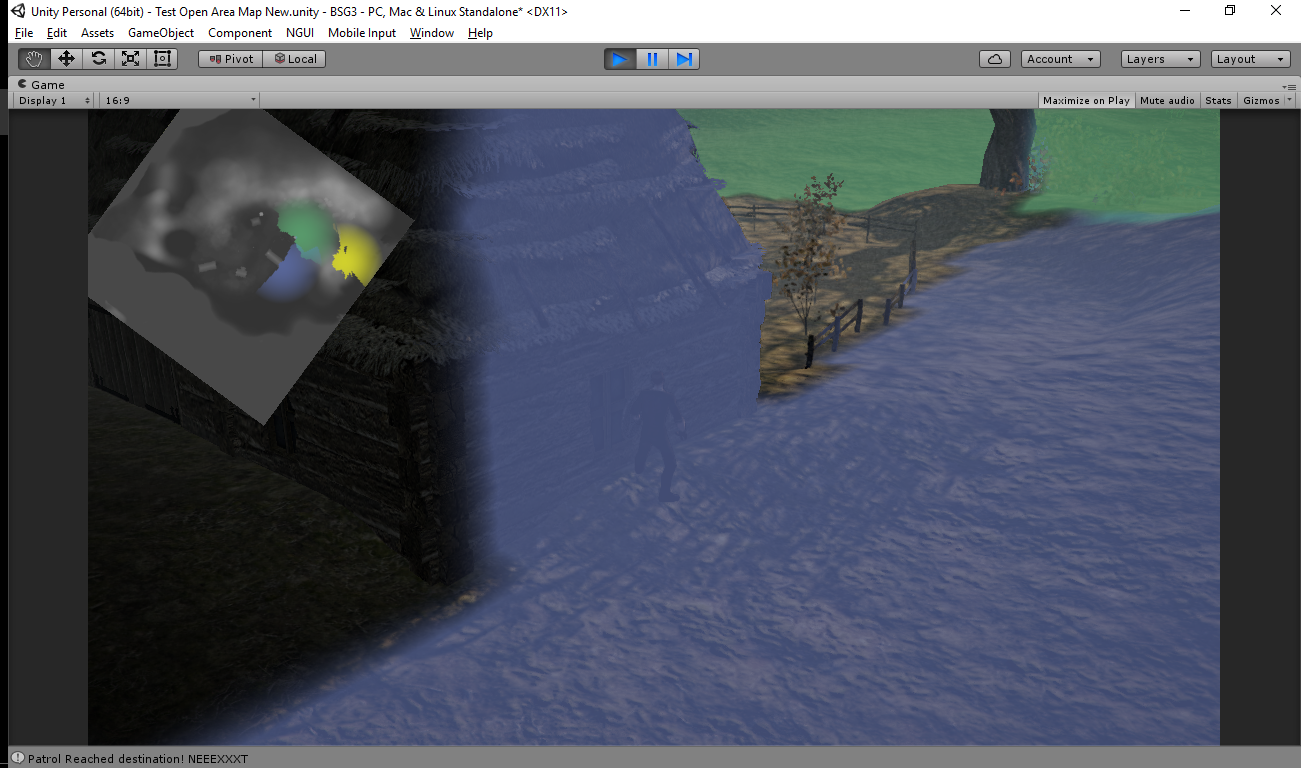 In the end, I had to just allow the player a natural viewing area, and although I do use heavy fog, it’s for atmosphere, not to obscure the player’s view.

Instead of cheating by limiting view, I just allowed the AI and the player to interact at potentially long ranges. AI will begin to respond to you at ranges of up to around 100 meteres. This ends up creating some very unusual game play patterns.

Targeting a group of ai at around 50 meters. 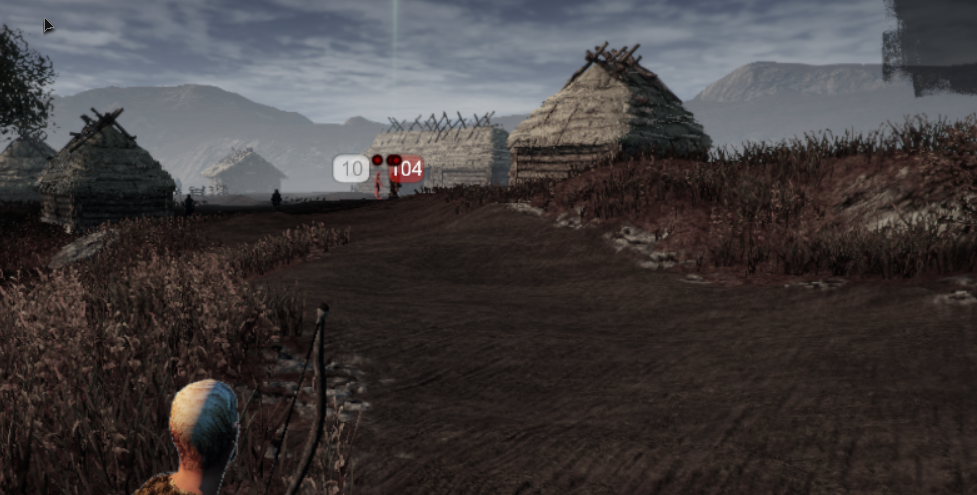 Since enemies can rush in to reinforce each other from long range, combat can have a more fluid feel. You don’t have reinforcement timers or scripted events, instead, you just look at the reinforcements, try to judge how far they are and how long it’ll take to get to you. It ends up becoming fluid and has even very minor emergent qualities.

There are trade-offs here, you lose some of the distinct separation in having entirely disconnected encounters one screen away from the next as one combat encounter can bleed into another. But I believe in this case, it’s an overall positive as it builds a cohesive experience.

Not "A SUPER REVOLUTION IN GAMING"

But it is a unique spin on Turn Based Combat.

I worked very hard to contribute something to the genre and try to do something new.

Although nothing in BSG is revolutionary the total package is something that I've never seen done before in Turn Based games. I believe that there are meaningful contributions to the genre, things that really haven't been done much (or at all), while still feeling natural to turn based veterans.

If you're interested, you can view some raw game play footage here

So after a year and a half, here I am.

I'm a small solo dev, working on a really ambitious project. Every vote is helpful!

Thanks guys (and girls),
Nick

interesting article and good luck for the future ;)

Thanks for the heads up! I have a habit of making everything too dark at first, it always takes a few iterations to lighten a scene till it feels right.

Looking really good. Keep it up, you got my vote!

Thanks man! Appreciate it!

What you have managed to create here is magnificent.

The gameplay is smooth and seamless and the camera control is just beautiful.
Looking forward to hearing more.