What ho! It’s been a busy few weeks preparing Greed for its first public screening, so let’s get right on with what’s new:

Although early versions of the game had an end-of-level boss battle, I ended up scrapping it for various reasons. I’m much happier with this one, which turned out to be a lot of fun to script. In the finished game, I’m planning a boss fight every 2 floors, with some different random encounters (maybe shops, or gambling minigames etc) on the other alternate floors.

Anyhow, here she is: the Cave Mother. She maaad. You’ll meet her after Caves 2. Be ready! 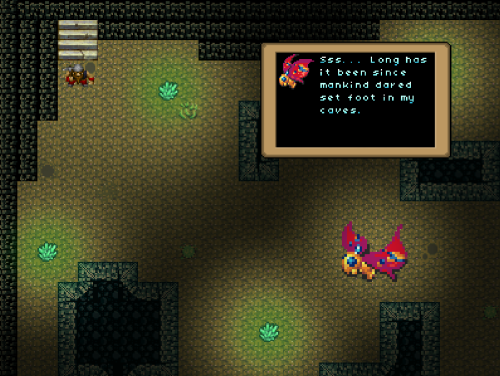 The third tier of rings is now in the game, bringing the total number of non-unique rings to 24! Whoo. Tier 3 rings can be crafted from level 6, which means they’re effectively uncraftable at the moment, but they do have a chance to spawn at any point in the game (higher-tier rings get more common as you progress through the floors).

The tier-3 rings are: 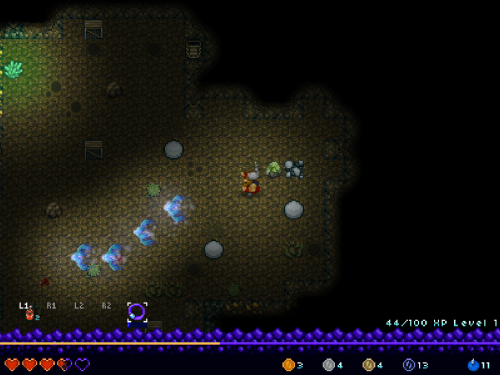 This is a good point to mention that pull radius and critical chance are now things! Your dwarf now acts like a little hoover, sucking up loot as he approaches it, and Rings of the Thief increase the radius. Meanwhile, criticals deal double damage and have a 1% base chance to fire on every hit. Equip Rings of the Warrior to increase the chance and start dishing out more damage.

There’s only one more set of rings to go for the complete set of craftable rings. Plenty more unique rings will be added as I go on too!

I was finding that as spell rings rings are upgraded, it was necessary to fill nearly all your ring slots with Rings of Magic to keep up with their mana consumption. As this is clearly Not Fun and limits the things you could be doing with those other slots, I’ve made a few improvements: