Her Majesty the Queen of England kindly seeks one's assistance in this intergalactic point and click adventure game... and you don't have long!

There are but 4 short days to pledge your support to this moderately amusing space themed adventure game! Inspired by/ indiscriminately plagiarising classic surreal British comedy acts such as Monty Python, Her Majesty's SPIFFING sends you into the cosmos to claim new lands for a Galactic British Empire.

Her Majesty's SPIFFING seeks to channel classic adventures of yore, mixing classic Lucas Arts story telling and puzzling with competent 3D graphics! More is explained in the pitch video below:


Assuming command of the near futuristic space ship HMSS Imperialise and her crew YOU (yes,YOU) will venture into the cosmos, solve puzzles, engage in witty banter, deal with crippling claustrophobia, gradually succumb to the sustained exposure of cosmic radiation and so on, all for Queen and Country.

Heck, along the way, you may stumble into a few other folks venturing about the cosmos with their own intergalactic aspirations…

***SPOILERS BELOW***
You will stumble into a few other folks venturing about the cosmos with their own intergalactic aspirations.

With 4 days to go Her Majesty's SPIFFING is a mere 15% away from it's £30,000 target, more screenshots and videos can be found on either the Kickstarter campaign page or on IndieDB. Also a PC pre-alpha demo can be downloaded by following the link below: 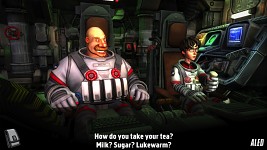 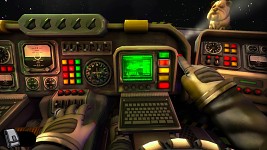 This desperately needs to happen!