A new screenshot and a description of my activities this past week.

Today’s update brings a new screenshot from Digitanks-land. Click on it to view full size. 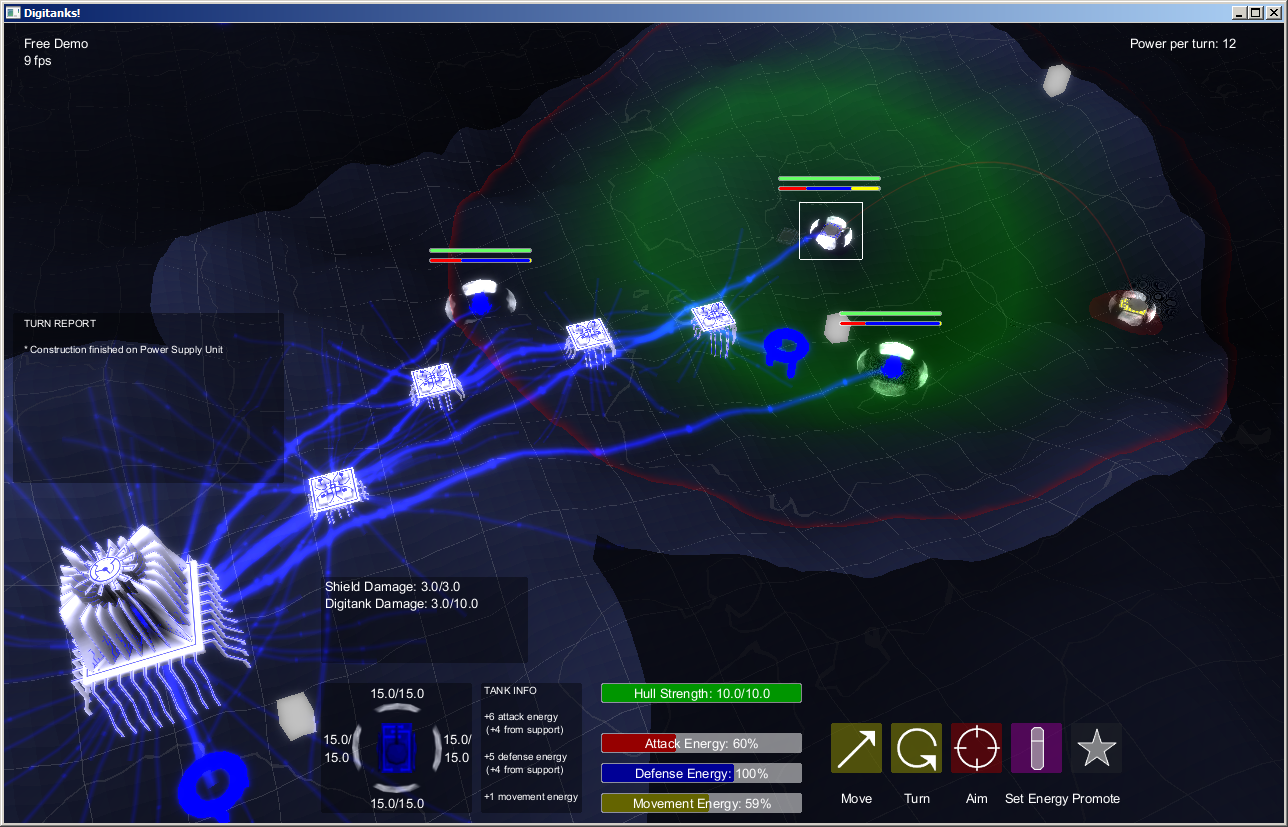 Featured in this new shot is are the new CPU and buffer models. A long time friend of mine, Adam, is helping design and construct the models. These designs are still in progress, we’re trying to work out the details on how we want them to look, so the textures and geometry of them are far from finalized. But, they should give a rough idea of what the end result will look like. There’s a chain of buffers leading up to that small gray box, which is placeholder art for a resource node. The blue circular object right next to it is a resource collector that the player is trying to construct. The yellow tank on the right has decided to attack, and I’ve responded with some tanks of my own. The large blue tendrils coming out from all of the structures is the player’s “Network.” It defines the player’s territory and helps support friendly units. In the future, I’m going to write a blog post detailing how we came to the design decisions that we did concerning the structure models, but for today it’s just a screenshot.

I spent most of the past few days revamping the tutorial. My previous goal for the tutorial was that the player could learn the game as he was playing. This is pretty common in first person shooters, and that’s where my previous experience comes from. However, it’s just not realistic in a turn-based strategy game. Civilization IV, for example, has Sid Meier personally teaching the player the basics of Civ, and the new Red Alert 3 has special tutorial missions that instruct the player before he even gets into the game proper. It’s a noble goal to not require the player to play a tutorial, but I think it’s standard practice in a technical and strategic game like Digitanks, and limiting myself in that way was starting to detract from the player’s experience, since the in-game tutorial lacked sufficiency to cover all of the required topics. So, I decided that my approach about it was all wrong, especially when a couple people (you know who you are, thanks!) wrote me telling me about how it was wrong, all wrong. The new tutorial is much better. It removes the player from having to learn under pressure, and hand-holds the player through the process of moving, aiming, turning, promoting, and setting the energy for a tank, and has him kill an enemy tank for practice. It’s so easy, that my mom (notorious non video game player) completed the tutorial with only minor difficulty. This tutorial is so easy that I think that my dog could be trained to complete it, if he had opposable thumbs and could operate a mouse. So, my next goal is to get an equally easy tutorial that teaches the player the base building mechanics. That’s going to be a bit more of a challenge, but I’ve already finished the first draft so all it really needs now is some good playtesting.

Adam, like I mentioned before, is helping with some of the artwork. He’s pretty keen and he’s a great guy, and his help is allowing me to focus more on the design of the game. My role as the “Facilitator of Fun” is playing the game, figuring out what the most un-fun part of it is, fixing it, and playing the game again, ad nauseum. I mean that quite literally, it’s beginning to be a bit of a drag. A week and a half ago the game was completely not fun, and slowly I’ve been wrestling small inklings of fun into it. There’s a fun game in here somewhere and I just need to chip away at the stone until its true form emerges. Some of the problems are systemic and cause me to re-evaluate the way I think about the design of the game, but the majority of the problems are either minor playability issues, a multitude of which must be waded through as if I were swimming through a game development quagmire, or else AI problems. It’s funny how many problems in gameplay stem from the bots that control the computer opponents — if they don’t behave in a reasonable way, the player stops having fun. After all, a bot that simply lets you roll over his base with no questions asked isn’t very fun. You could say I underestimated the amount of time I scheduled for myself to design fun gameplay at the onset of this project, but really I underestimated how hard it would be to make convincing AI’s. They don’t even have to act the way humans do, so long as they provide an appropriate challenge. That is in itself a challenge for me, so Adam’s work is immensely helpful in allowing me to concentrate on it.

In any case, being so hard at work as I am, I’m planning on releasing another demo in near future that will showcase the new base-building aspects of the game. I’m also getting closer to creating a feedback system for the website. Thanks for following Digitanks development and thanks for your patience!

PS: I've opened up the media section to public posting, so anybody can post screenshots from the demo if they like. When the new demo comes out I can't wait to see what people are doing with it!