This is why you back stuff up more frequently than I do.

Today, I was going to show you both the GDI Titan AND Juggernaut and a handful of civilian people.

My computer's disk drive decided it was time to kick the bucket, which is awful. THANKFULLY I have the good sense to back up my work, but apparently not as frequently as I should.

Not too terribly much was lost TS:AE wise. Pretty much everything from the last news update is gone, Including infantry and the extra modular buildings unless I can somehow get this disk drive to work again. I have a friend looking at it, and hopefully some magic can happen.

If not, it isn't an incredibly huge loss, but it will take some time to bounce back from.

Thankfully, not all was lost on this recent turn of events. I do have some stuff to show, although it isn't the spectacular display I had promised.

I had transferred some work over to my flash drive to take with me on a trip, and while not all of it survived, here are a few containers and the revamped cargo train. There are two pieces to the front engine that can be added in as optional to provide more power to your cargo convoys. All of the containers are vehicles currently, but that means that they can be manipulated by carryalls and do various other things that you can't do with a building. 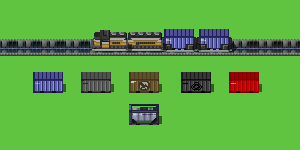 *sigh* hopefully that spectacular post will come next week.

Aw man... I hate it when that happens, it can be a real motivation sapper. Hopefully with your friends help you'll be able to recover at least some of your recent progress.

Man, that must be hard to take. All that work, probably weeks worth, down the drain. Hope your disk drive can be salvaged, and if not, I hope you can push back from this.

But, that train looks a bit silly if you compare it to the high speed monorail train shown in the original.

Yeah, but now you got an old fashioned cargotrain running on a monorail-rail.

Also, wow. ModDB being typical, downvoting people because you personally disagree with a comment?

It is a monorail cargo train. There is nothing preventing monorail track systems from bearing loads and there are already real life examples of these systems on the drawing board including a system that will run the entirety of the I-35 interstate in the U.S. A suspended monorail system would have trouble bearing weight, but that is due to the construction of the suspended rail itself. These low to the ground monorail tracks are no different than traditional dual rail systems we use today, they just have one larger rail.