I had the opportunity to showcase my game at the A MAZE exhibition this year. If you are interested in my thoughts on what went wrong and what went right during the exhibition, read on!

Yesterday (April 25th) was the last day of the international independent videogames festival A MAZE and I had the opportunity to showcase my game at the exhibition (thank you, Indie Arena!). I had some experience in presenting games on smaller local events, but the A MAZE was the first real conference where I had the chance to show my game to a big international audience. If you are interested in my thoughts on what went wrong and what went right during the exhibition, read on! 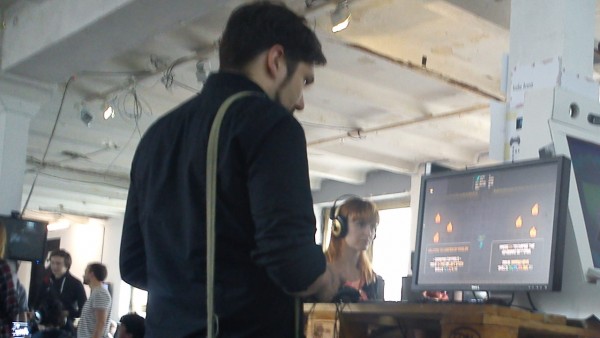 
1. Color coding on a black gamepad
The game that I showcased (Legends of Pixelia) supports local multiplayer by pugging in multiple gamepads. I thought that it would be a cool idea to bring the three gamepads that I own, so that multiple visitors could play at the same time. Well, the idea did work to some extend, but I totally forgot that there are people outside who don't know the XInput buttons by heart. That wouldn't be a main problem, but Legends of Pixelia heavily depends on color coded objects and two of my gamepads were pitch black with black buttons: Fail...
Also, there was one exhibition visitor that was color-blind. To my surprise, he said that he was able to differentiate the colors. Nice!

About 50% of the players had no idea what to do in the room on the screenshot below: 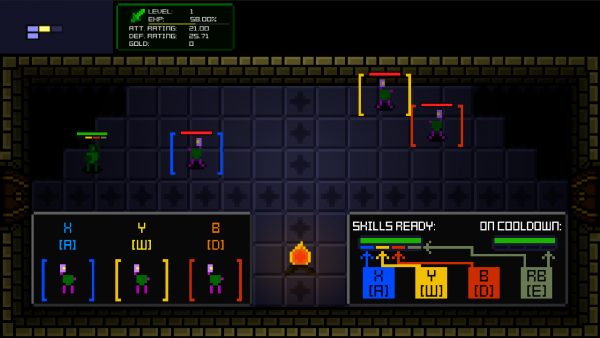 I'm a logical thinking programmer and I guess some of the tutorial rooms were simply impossible to understand for normal people. There were lots of helpful artists and designers at the A MAZE that had some really good ideas of how to redesign the tutorial, so I have an idea what to do next.

3. There is always one bug left...
No matter how much you try to fix bugs before a presentation, there is always one bug left. In my case, there was a special pattern of players leaving and joining the game, that resulted in a bug preventing players from starting a new game. I had to restart the game multiple times during the first hour of the exhibition, until I figured out how to avoid it...


1. High interest
There were some really great games at the A MAZE this year. Although there were cool projects like Face It!, Line Wobbler and Crawl (just to name a few) in the same room, players were very interested in playing Legends of Pixelia. During the five hours of the exhibition, the three gamepads were in use most of the time. I'm really glad that so many people enjoyed playing Legends of Pixelia yesterday. :-) 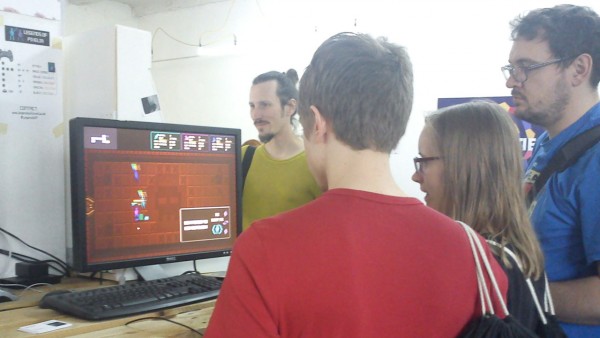 2. Dedicated A MAZE build
I decided to create a presentation version of Legends of Pixelia to better match the requirements of a game for an exhibition. Time consuming non-ingame things like choosing a hero class and typing your hero's name have been removed and I added a quick join feature that allowed players to join others who are already ingame. This way, players had more time playing the game itself instead of reading through multiple menus to be able to start a session. Although the presentation version isn't perfect yet (I mentioned a bug ealier), it was a good idea to create a dedicated presentation version.

3. Feedback
It's interesting to talk about your game with players who have a totally different background in gaming. To name a few, there were casual players, console gamers, developers and designers at the A MAZE -- all of them gave feedback and most of them had ideas of how to improve the game. I made a giant list of useful comments from the testers yesterday evening and I'm gonna work my way through it during the next weeks. Thanks to everyone that played Legends of Pixelia at the A MAZE, you were great! 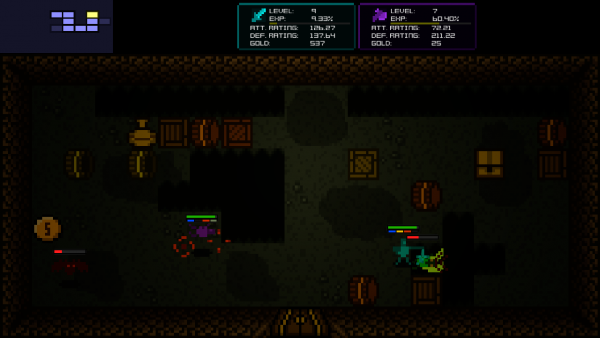 Oh, you've made it through the whole article? Nice! Want to test the demo featuring the tutorial I mentioned earlier? Check out the downloads section here or visit the itch.io page to buy the full game.

Great article and good information. Read it with interest and took notes!