So it's coming up on release day. Things are surprisingly going as planned, play-testing is not revealing any major flaws in the current level, and we've entered one of the final phases just before release. The Tag Dump.

Tag dump is pretty much what you'd expect it to be. We're putting in all of the correct assets that don't affect gameplay and any improvements that have been made last-minute. The level is starting to look good, and it's starting to feel good. Sure it was fun playing before, but it lacked that certain edge to make it stand out. One of the main things that's helped the level really come alive, and let the player know that he IS a Flood is the inclusion of first person arms and animations. And today, you'll be getting your first look at them(Go to our Images section, and right click for full size; you'll get a much better view): 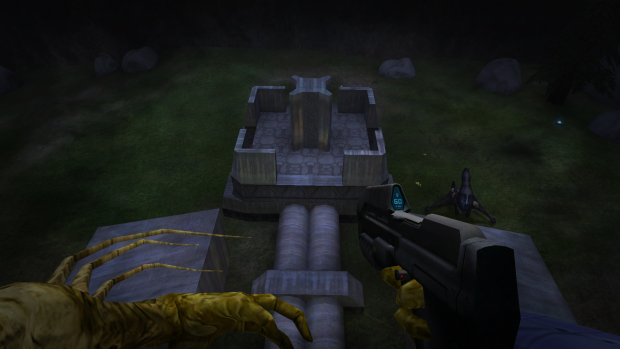 We're most likely not going to put out a video of the animations, although if enough people ask for it, I'll do it when, or if, I get the time, so no promises there. Sufficed to say, these arms come equipped with all manner of Flood-styled animations, created by our animator bourrin(and yes, the melee WILL be using the tentacles).

Next up we've got some Miscellaneous improvements that I've always thought were long overdue. First is improving the existing Covenant Field/Shield Generator shaders, as the originals sucked, and didn't look like the Xbox versions (not entirely sure why this is the case). From left to right, we have the old version, and the new version(created by spiral and heempy): 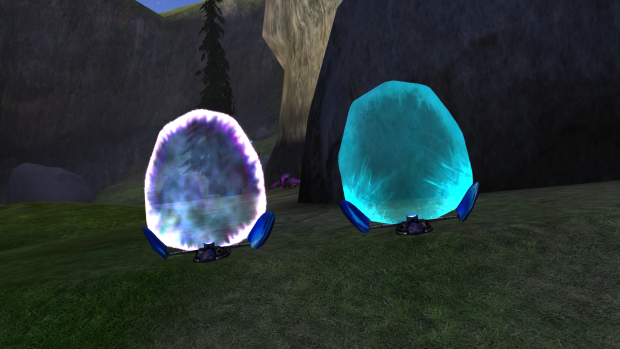 Next up we have improved jackal shield shaders. Again, suffering the same fate as the Covenant Shield Generator, they were not ported correctly to the PC version, and ended up messed up. You'll be able to see the difference quite clearly from this next picture(From Left to Right - New(Major), New(Minor) and Old): 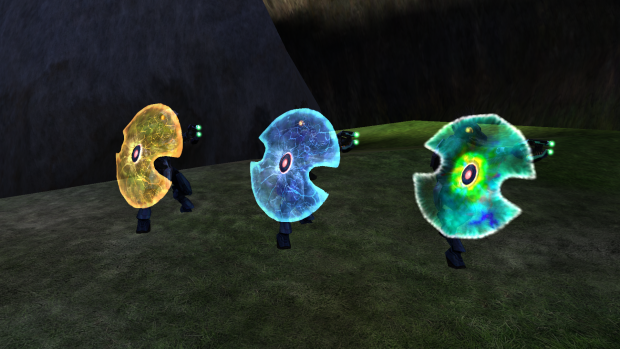 Next up, is a bit more information about StKft, and the progress being made.

Although our original placeholder biped was in-fact a Flood, we never really liked what was being used. It stuck out too much, and didn't fit entirely, but it did serve its purpose. One of those things was allowing the player to get in a multitude of vehicles using elite animations. After removing our placeholder biped, we obviously came across the issue of the current Flood animations having no vehicle animations. So, I set out to give them the animations required. The point of talking about this however, was the consequences that occurred having implemented them. The most problematic being that it reduced our tag space by a drastic amount, pushing us over the boundary into oblivion, no longer allowing us to compile the map. And thus to get us back into the green. Cuts had to be made.

Yes, I'm afraid we had to cut a few things. Most were redundant or useless tags, duplicates, stuff that nobody would really miss. The biggest however, was the Warthog. The Hog got ditched in order to fit 3p animations for the Ghost and Shade turret. For those of you wondering, could you have cut something else? Yes we could have, but then the 3p animations for the Warthog would push us over the boundaries once more. In the end, although none of us really wanted to cut the Warthog, it was either that, or something more important. Such as one of the New Enemies. Anyway, I felt a direct explanation was due to the players who may have remember it in v0.1b.

Finally, I want to talk directly to those who Beta Tested those many months ago. Consider this your beacon in the sky. You're being called back in once more to test StKft, this time in its final stages. To make sure that every bug is squashed, stomped on, and eradicated before public release. Contact me via PM on Moddb/HaloMaps, or by Steam/Xfire and you'll receive your build.

And to those of you who are HaloMaps members, there is a quite good reason for not bumping the thread with this news post, that being that we're going to create a new topic specifically for release, and since Dennis isn't fond of duplicate threads, it's best to leave it stay buried for now.

As an addendum, I'll say this: The level is turning into something I never thought I'd see it become. It's turning into more than just a proof of concept for us, it is turning into a fun, complete level in its own right. It is, dare I say it, turning into what we wanted it to be when we started.

Seeing as I don't know much about modding, what was the problem with 'too many' tags? Does it cause lagg? Remove the ability to play? Not being able to literally compile the map?

Bear with me, because this is quite long...

The Engine limits how many assets you can put into one map, bsps(parts of the level) and all tags are counted. The Engine has a really strange measurement for these. For example, a music file will take up like 0.01M, but 3p animations for entering/exiting a Ghost took up something like 0.5M.

Effectively, when you breach the 0M barrier, Tool (software used for compiling the map) will not allow you to compile the map. HOWEVER, it will if it's even slightly above. The problem is, even if it is above, it can still cause the map to be highly unstable, suffering from exceptions at random.

Optimally, the map should have 0.5-0.7M free. When we added the 3p animations for Ghost/Shade originally, it through us to 1.27M over the limit. The Warthog taking up probably between 0.3 and 0.5M.

So, in answer to your questions: It basically makes the map unable to compile, or if it does compile, and it's just slightly over the limit, it'll exception at random. There's a fine balance from doing this, but, as someone pointed out on the main page comments section, it IS possible to go over it. But, it requires using an extension called Open Sauce, that, for the reasons mentioned on the main page, we didn't want to use.

Hope that clears things up for you - sorry about the length by the way, but the context was needed to fully understand what exactly happened.

So are you guys planning anything after you finish this project?

This entire project is going to take a long time to do. Honestly I don't even want to consider anything afterwards(in terms of new maps) until we're starting the final level.

The only thing we were planning to do after the project, was perhaps create tutorials, to help people get into the Halo modding scene and start producing some great maps.

I've been looking forward to this for a VERY long time. If the Halo map editor wasn't so unfriendly I would definitely have got into it a long time ago (I map for Source instead) so its nice to see that some people are actually trying to do good with it.