This week we’re showing off the creative process behind the very first mini-bosses in Okhlos!

So we had a couple of days off this week, thanks to Carnival (yes, that’s totally a legitimate and valid reason!) and I took off to spend them in the rural and wilder part of the country. While I was there I started drafting up the first few mini-bosses of the game.

We already had the designs for the monsters, but I took on the task of translating them into pixel art, and when you do that they usually change a lot. Drawing and illustrating are very different from creating something through pixel art. They are basically two different languages, and you have to know the strengths and weaknesses of each one if you want to do good work. You also have to realize that things are going to change a lot going from the concept art to the sprite.

I worked on three mini-bosses that will all have very similar mechanics. They are the Manticore, the Sphinx, and the Chimera. Here are the sprites I made for them:

NOTE: Keep in mind, in order to fully enjoy them in all their pixel glory, you should open the images and see them in full size.

As you can see, the body started off looking more like a greyhound’s, so I riffed off of the Nemean Lion to give it more shape and complexion.

The wings were a real pain. I thought I could just use the wings from the Harpy, but I soon realized that the two creatures keep their wings in very different positions when they’re idle and relaxed, so I ended up having to change them a lot. I started with white wings, changed them to black wings, and then somehow ended up with a completely different set of bat-like wings.

(Luckily, I was able to recycle that set of white wings and use it for the Sphinx. Otherwise they would have been a huge waste of time.)

The tail was pretty straight forward, as was the cloth that adorns the Manticore’s body.

As you can see, we took out the horn for the final version, as people would not stop pointing out that it looked phallic. (We are obviously very mature and professional here at CoffeePoweredMachine…) We also changed the face a little and we think it’s a bit more badass now, although maybe it looks a bit like Abraham Lincoln? 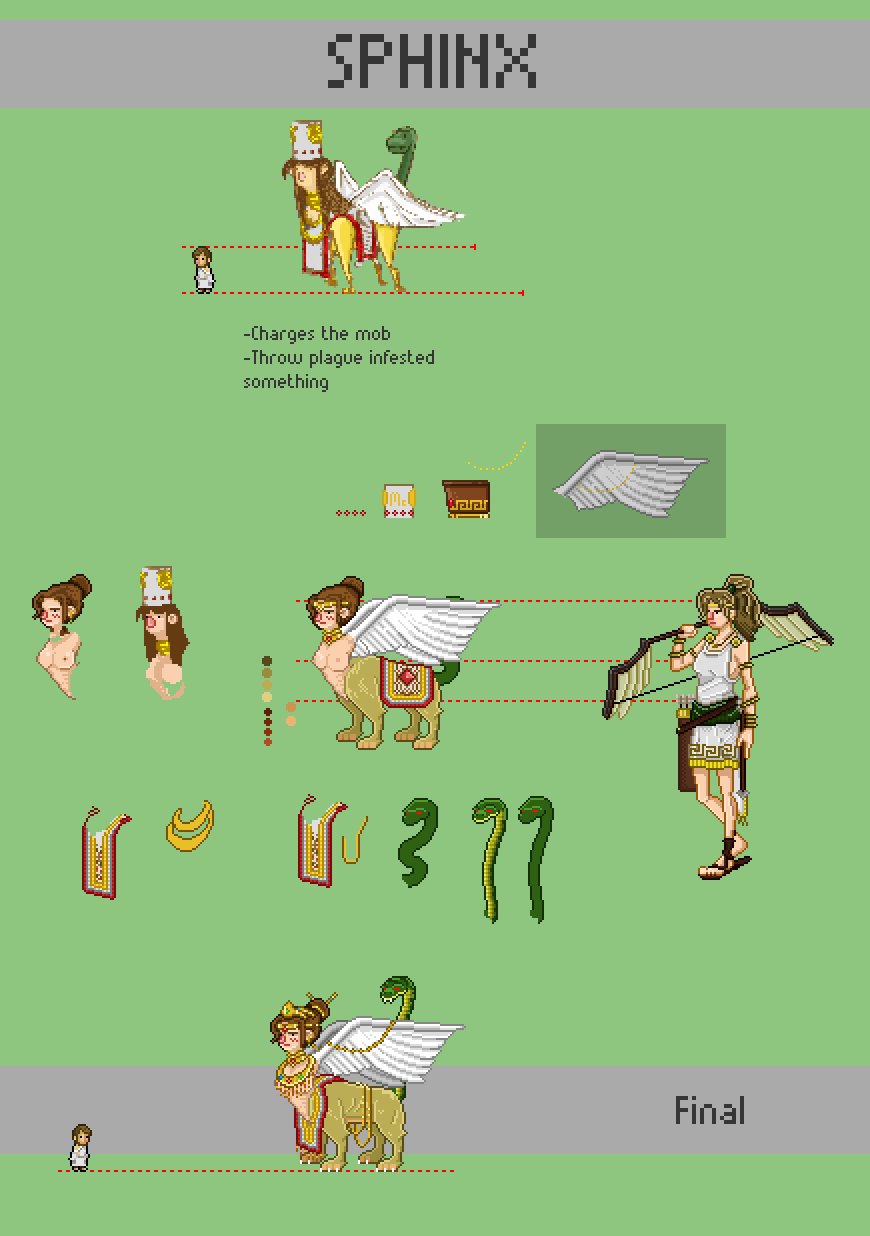 The Sphinx came together pretty quickly. We had planned from the beginning to use the same body for all three mini-bosses so that we’d only have to make a single running animation for all of them, and as such we just took the body of the Manticore and gave it a palette swap for the Sphinx. We also recycled some of the wings that we had discarded earlier while making the Manticore, so all I really had to work on were the torso, the jewels, and the snake.

The torso was by far the most difficult part here. I had to decide where the torso would emerge from the body, how the arms and shoulders would be angled, and I had to create a lot of other small details that were ignored – or rather, neglected – in the first draft. We used Artemis as a base for the size and proportion of the Sphinx’s torso.

We ended up scrapping the Sphinx’s arms altogether and just made the wings pop out from her shoulders.

I also had to raise the snake-tail a bit more as the wings were covering it up.

Finally, I just threw a lot of jewels on there, because, you know, reasons. 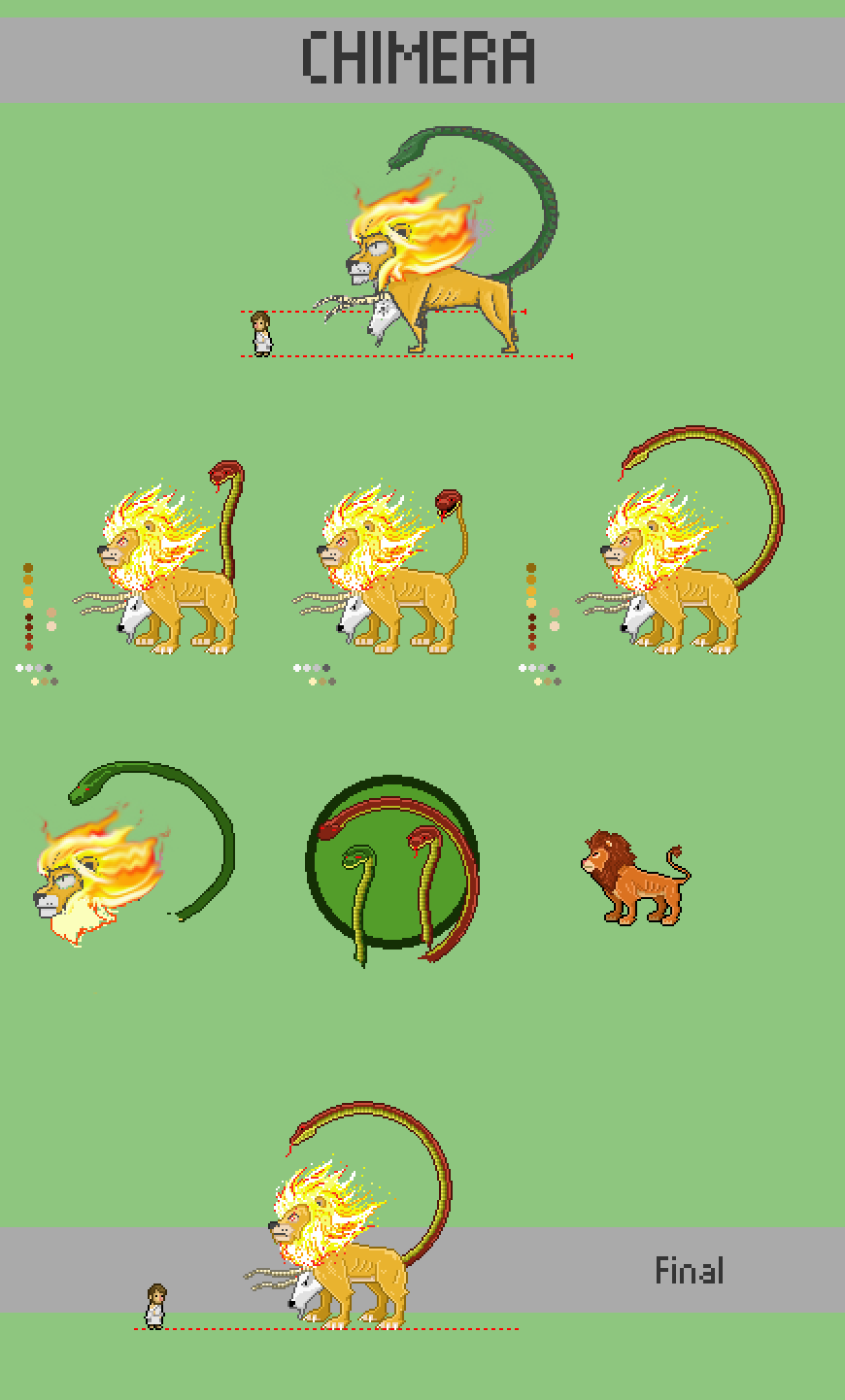 Similarly to the Sphinx, the Chimera came together pretty quickly, mainly because the body was already done.
I struggled on two points with this creature:

The first was the head. The fire mane is going to take quite some time to animate, and working on fire has always been my kryptonite.

The second thing, as you might be able to tell, was the tail. I wanted to use the same snake as I’d used on the Sphinx, just to save us the time of animating another one, but it looked really boring. My second attempt didn’t come out much better, if you look on the sprite sheet it’s really rather ridiculous – it’s just a regular lion tail with the head of a snake.

In the end I went back and stuck to the original concept, and I ended up with this weird Rockewellian [~obscure art joke] snake-tail.

And ta-da! This is how they turned out!

This post was written in a hurry by @roketronz and then, as always, it was edited and proofread by @pfque_!

Heh, pretty cool, thanks for sharing the process!

You guys should make it even more similar to Abraham.

Thanks! We dont want to **** off anybody, so maybe is better to leave it only as an inspiration :P

Anyways, i love to see that the manticore is really persian as it should be, thanks for the region accuracy.