The 3D Inventory:
Making a game that caters for both a normal monitor and a virtual reality headset (Oculus Rift at this moment in time) presents the developer with many new and interesting challenges.
For one, normal user interfaces do not render in a virtual reality environment. Everything that is usually painted onto the screen via UI layer has to be rendered as a 3D object in the physical world. So this includes health indicators, ammo counts and of course, the Player's Inventory.
Push For Emor is a Sci-fi FPS RPG. Being an RPG, there are missions to complete that reward the player with items, items which require an inventory (or bag) so that they can be stored, sorted and in the case of weapons, equipped.
Player inventory has to be a 3D object in the world. 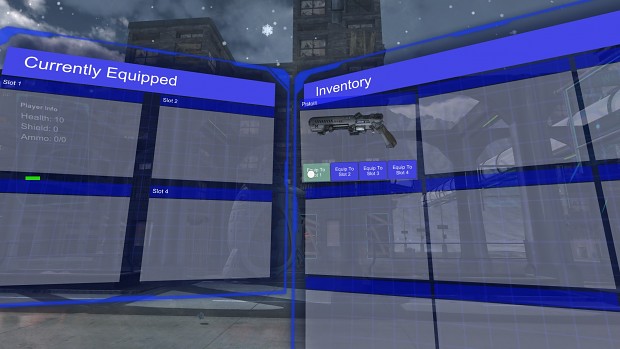 So not just an inventory system then. There has to be a screen that allows the player to see what weapons they currently have equipped. Also, the player must have the ability to replace a weapon with a new one in a particular slot.
So the challenge:
1. Make an inventory system in a 3D world Space.
2. Make an Inventory system that works with both Monitor and Virtual Reality.
3. Make an Inventory system that can be operated with just 1 button press (you can not see your hands in virtual reality and dragging and dropping, whilst possible, is awkward in VR.)
Equip and swap weapons with the 'fire' button.
So it took a while to get this looking and feeling right on a monitor and in the Oculus Rift, but now definitely closer to what I want, (but as a dev, clearly I’m not happy with it and I will no doubt be tweaking and improving it forever!)
Pressing ‘Tab’ on the keyboard or ‘Back’ on a controller brings up a 3D inventory where you look at your currently equipped weapons, view what you are carrying and swap weapons from bag to equipped in a single key/mouse button press.
3D Objects as slot items!
One of the advantages of the menu existing as a 3D object in the game world is that I was able to use 3D models for the inventory/equipped items. This looks great on a monitor, but ff you happen to be in the Rift, positional tracking allows you lean forward and examine the 3d models in your inventory. This is a grin inducer!
Until next time.
Lupus
(insert howl here.)
Lupus is the lone developer at Lupus Solus. Drop him an email anytime: lupus@lupussolus.com
Let's socialise!: Twitter | Facebook | Google+
Public Alpha - COMING SOON! Register your interest here: DOWNLOAD