It's been one year since the last update. I know, I'm tremendously late with the roadmap but the project is still going on, nothing can stop me to realize this dream! Here are some of the most important features introduced in the last months: Windows Porting, OpenGL upgraded, Memory Manager, Instanced Rendering, Cascaded Shadows, Missiles, Warp Drive, New Cockpits and Spaceship Models.

It's been one year since the last update. I know, I'm tremendously late with the roadmap but the project is still going on, nothing can stop me to realize this dream!

Here are some of the most important features introduced in the last months:

1-Windows Porting: The most important news is that the Windows porting is finally done! Since the code was already designed to be cross platform, this porting required just a couple of weeks!
All hardware-specific routines are in-fact part of a generic device class that is specific for each platform. This level of abstraction, combined with the fact that the game is completely written in C++ and OpenGL, allows the porting on new systems by simply rewriting just machine-specific code, such as system initialization, file system, audio, timer, input devices etc.
For the porting I used the good and realiable SDL library. I'm also very happy with the performance on Windows. Using a PC with AMD 7890k I got better performance than a 2015 Macbook Pro with i5. 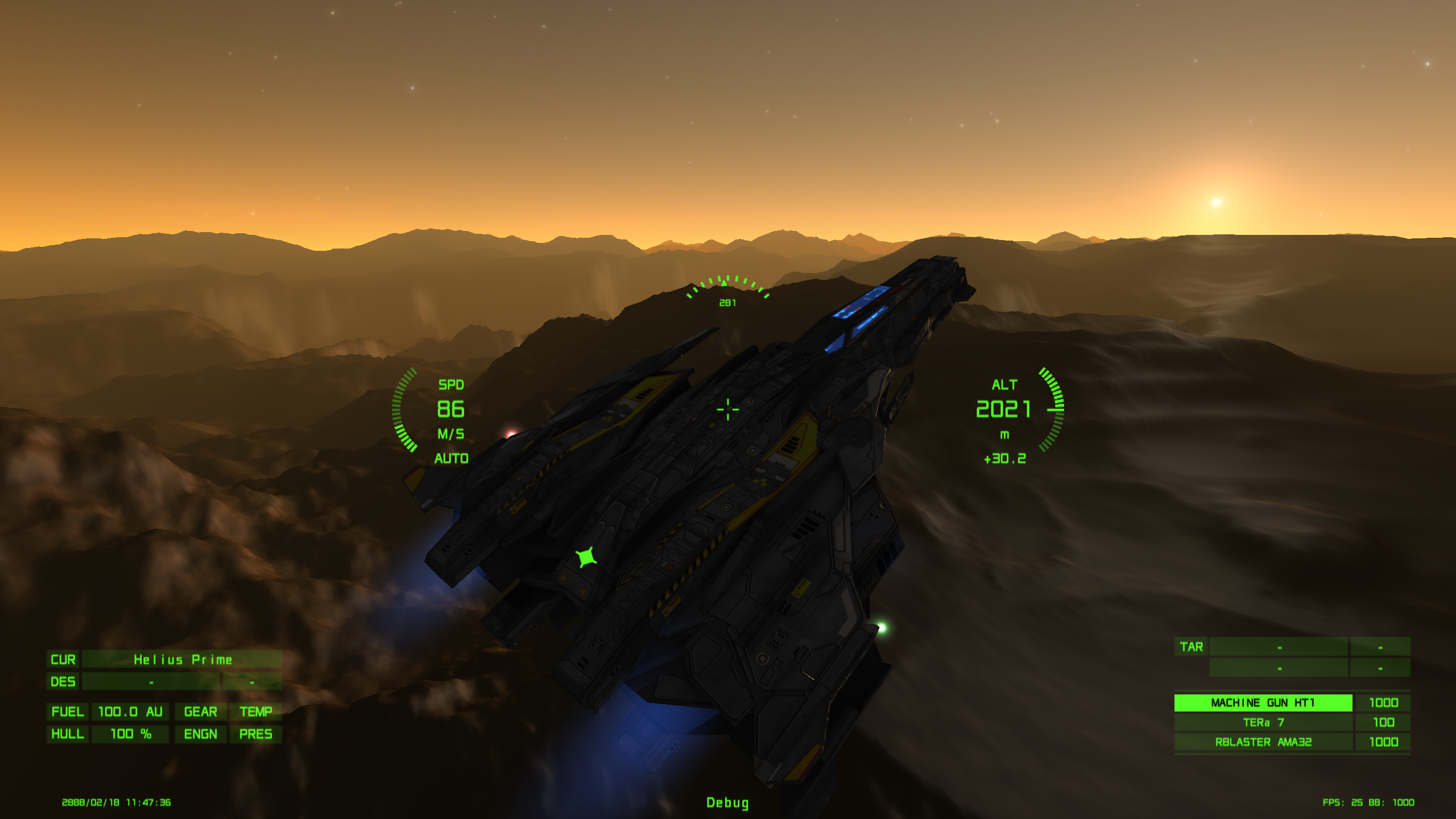 2-OpenGL Upgrade: Another important news is that I made the transition to OpenGL ES 3.0 for iOS and OpenGL 3.3/2 for Windows/MacOS, which allowed me to optimize various things, and to use features like Instanced Rendering and Cascaded Shadows with hardware PCF. 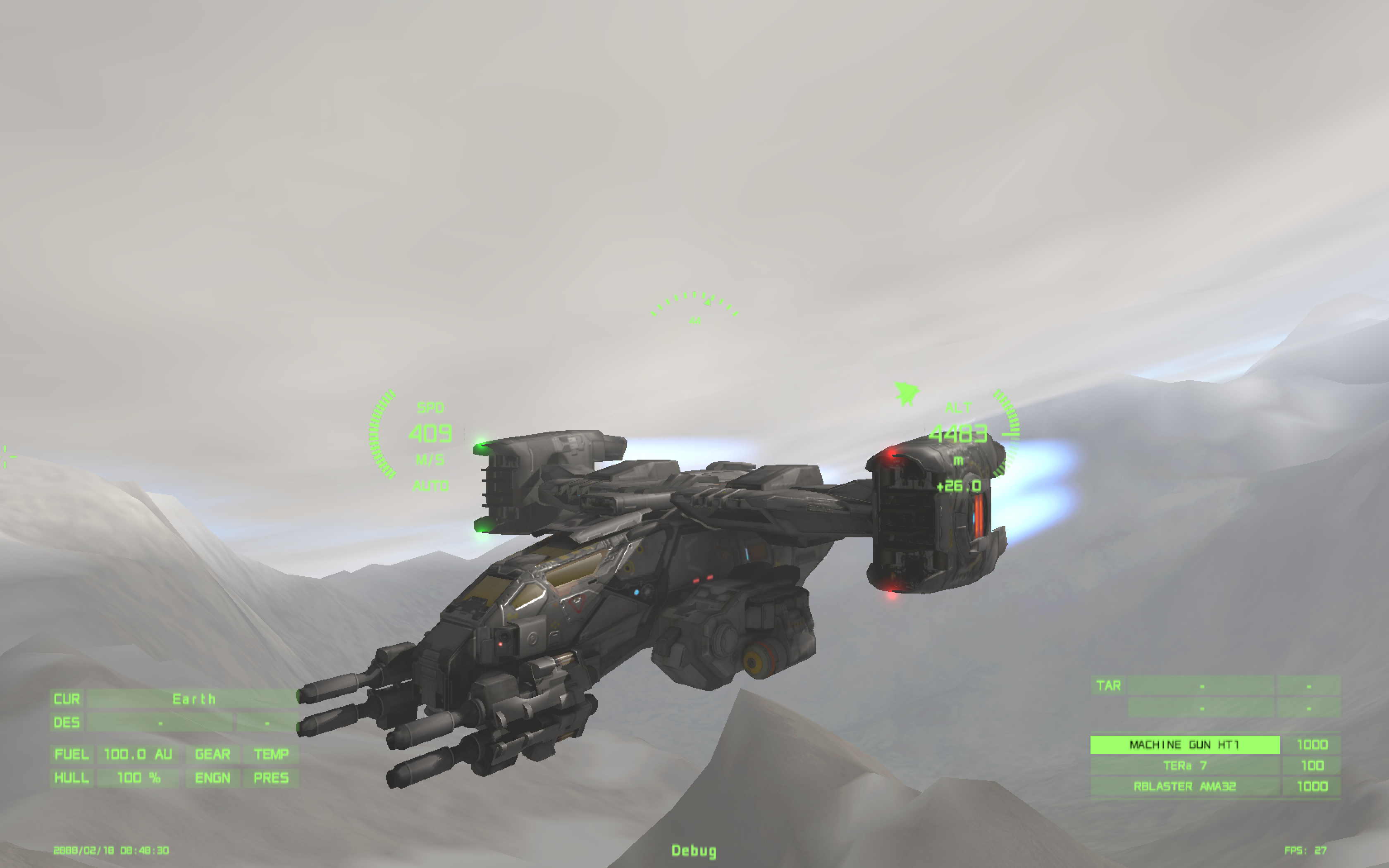 3-Memory Manager: A very big issue was the several dynamic memory allocations that caused slowdowns and memory fragmentation. The introduction of a Memory Pool greatly improved the fluidity and raised the number of FPS especially during the exploration of the planets. 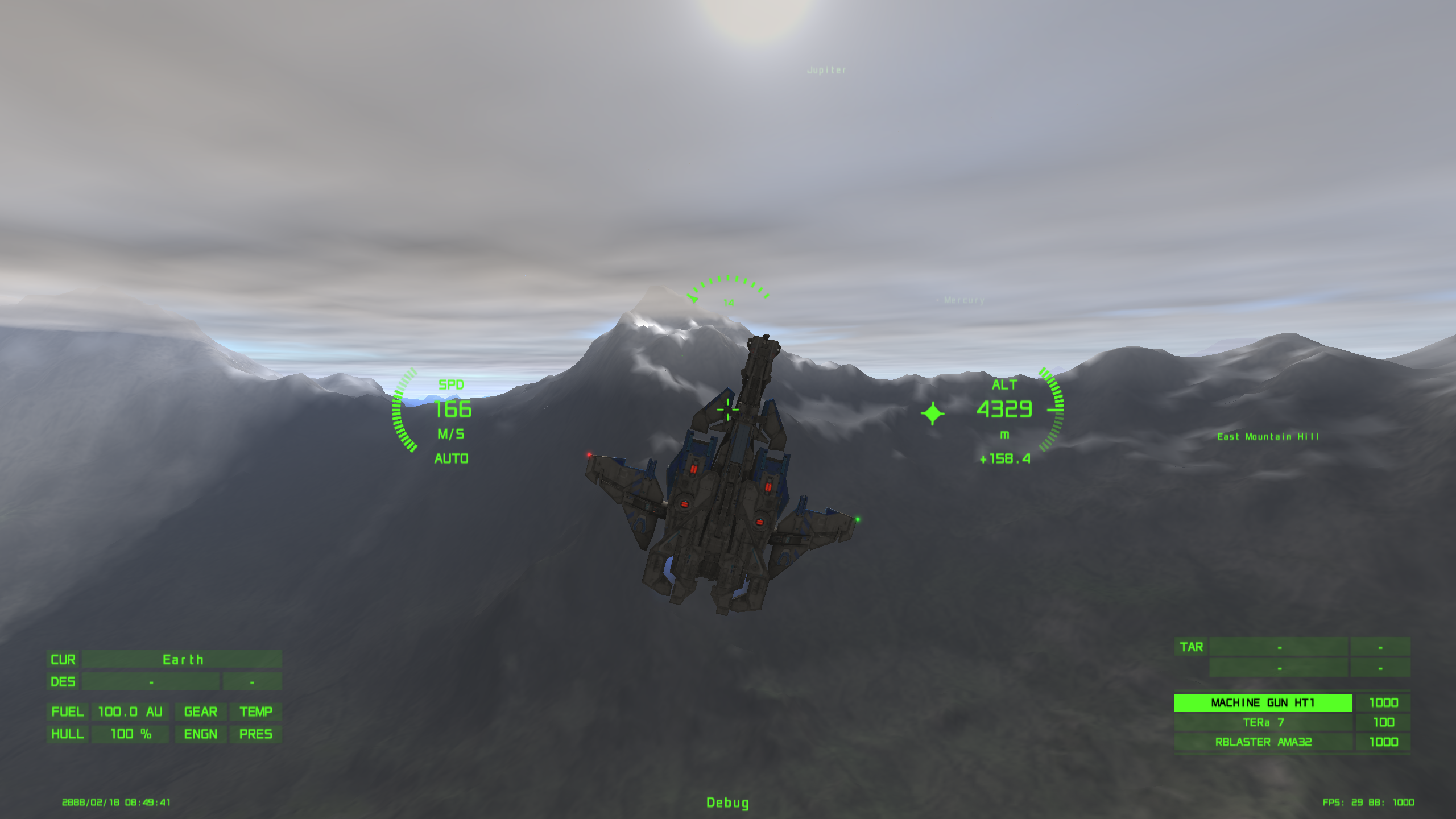 4-Instanced Rendering: This rendering mode allows to simultaneously display thousands of elements without any slow down. Introducing this functionality has allowed me to visualize the missile trails and, in future releases, to visualize asteroids/meteorites and planetary elements like grass/trees/rocks.

6-Missiles: Introduced new weapons that can follow the target. 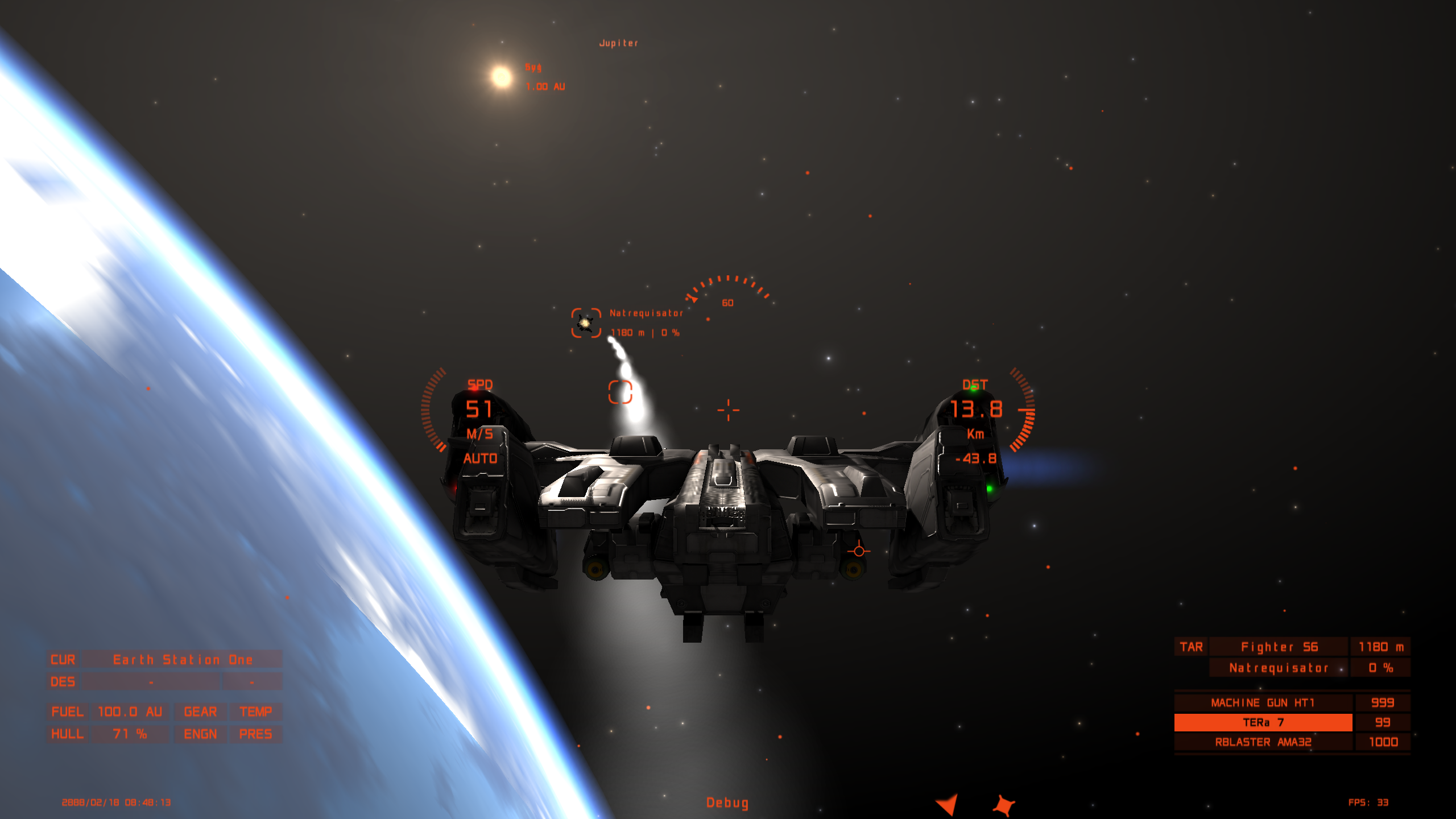 5-Cascaded Shadows: Shadow management is one of the most complicated things in a graphics engine. Implementing a basic shadows rendering is not that difficult, the complicated thing is doing it well... especially when the engine has to manage such altitudes and distances. I have implemented 4 different types of shadows based on dynamic distance factors. This allowed a more realistic rendering. 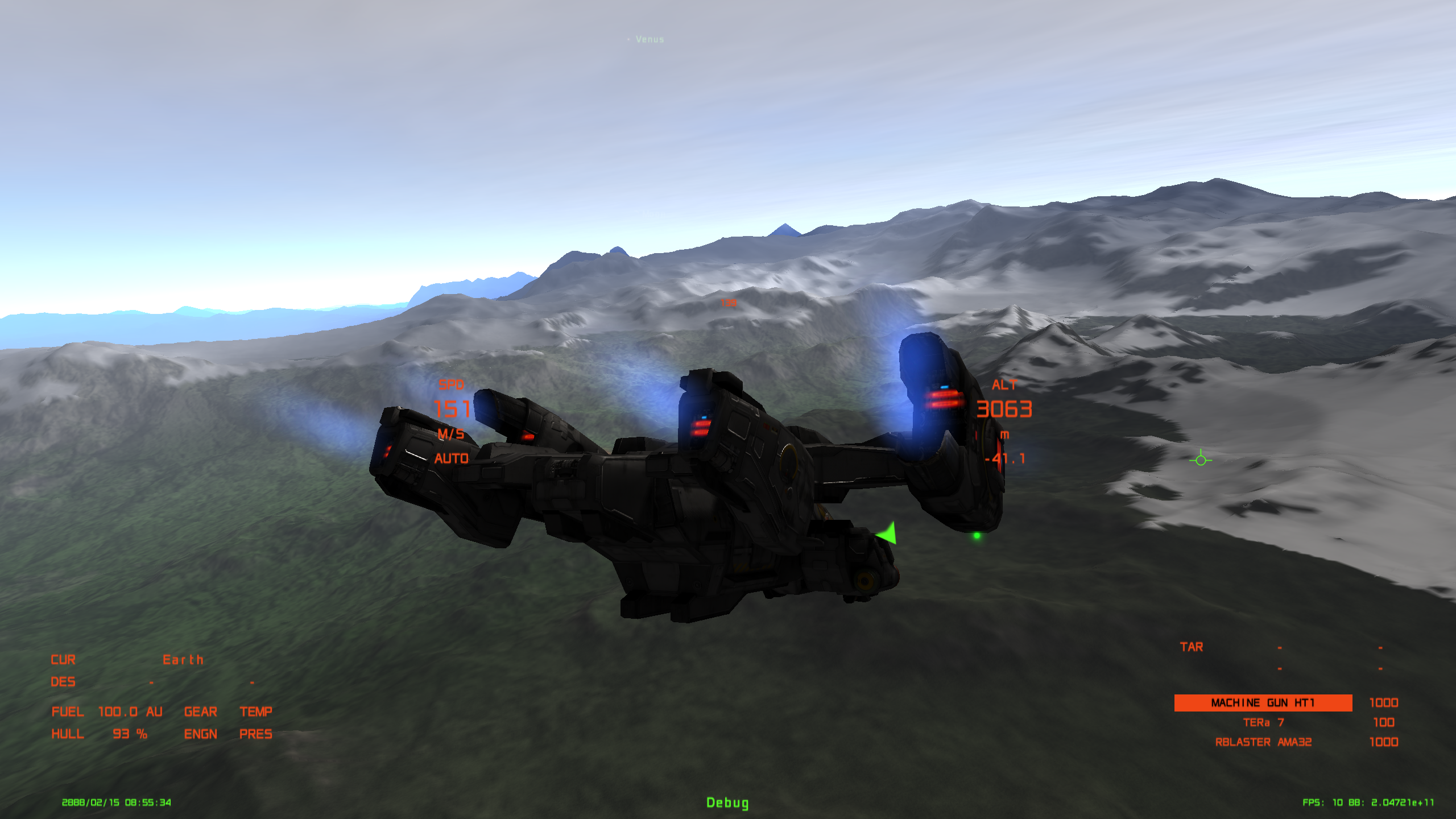 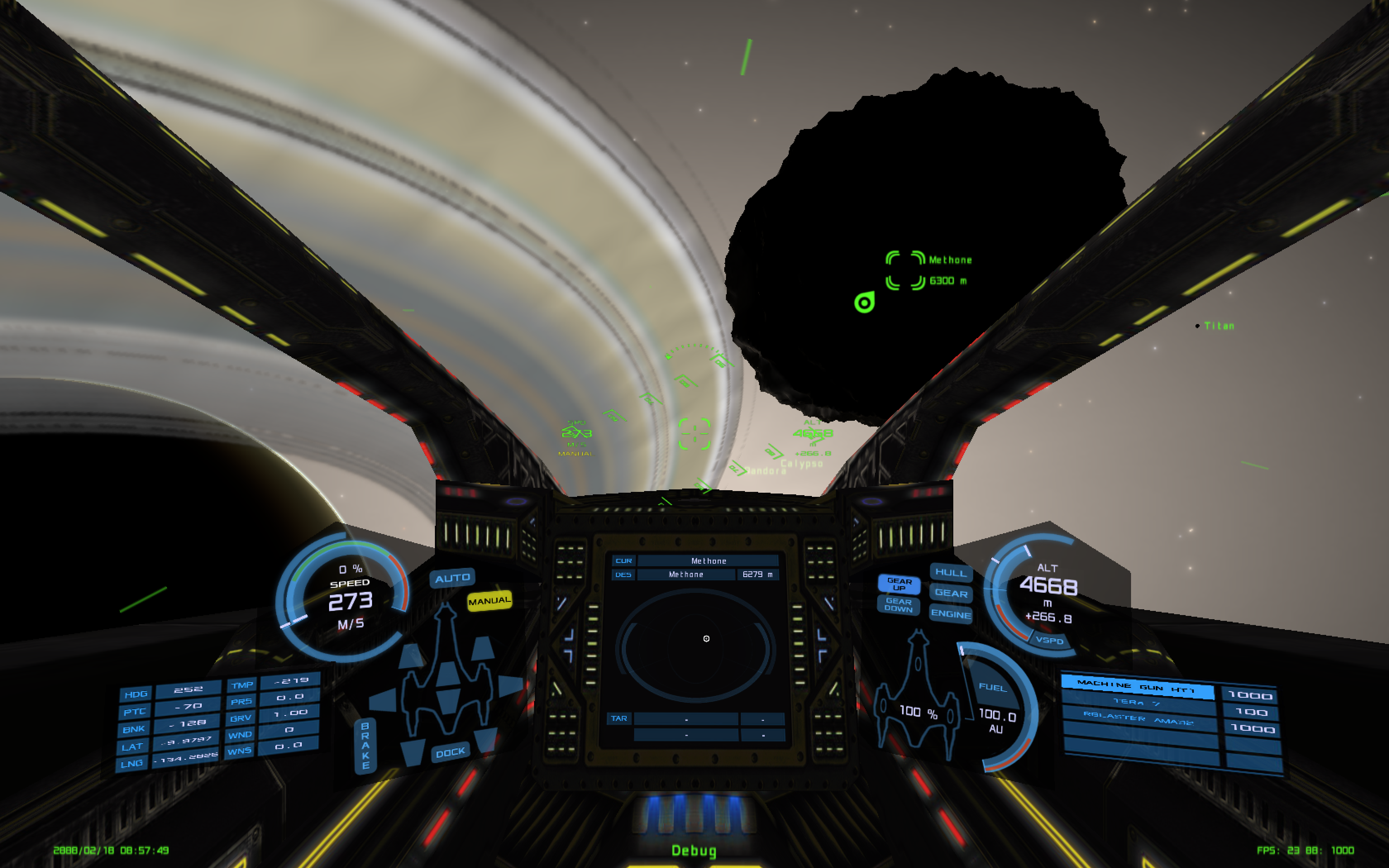 8-New Cockpits and Spaceship Models: As you know, I do not have time and funds to work on custom assets for now, so I'm using Royalty Free resources from some very talented authors.
However, I'm doing several modifications on these resources in order to make them consistent and compatible with the graphics engine. The simulator now can also handle spaceships with rotating engines and ailerons. 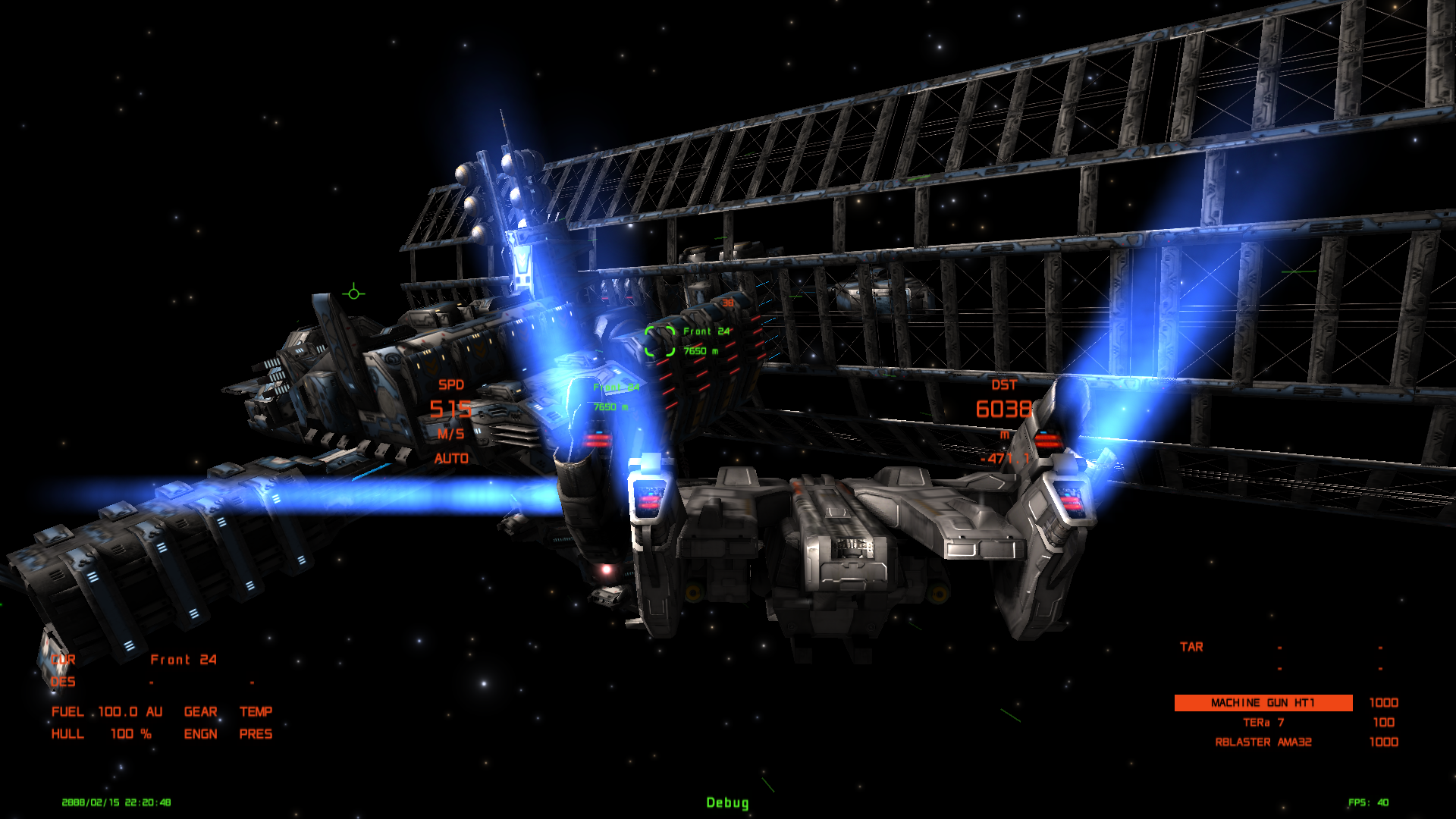 Now I'm working on new Space Stations and enable dialogs between AI Players. Next steps will be the new Runways and Finally the Missions and the Storyline.
A talented guy is helping me with the realization of 2D Avatars. And last but not least, I have officially a musician!! soundcloud.com/bzur ;)

That's all for now. Thank you all for the nice comments and support!

P.S. I had some issues with the name registration in Europe, that caused me to lose a lot of precious time so I decided to change the name of this project, using for the moment the temporary name "Spacesimulator.net Voyager Project".
For this reason, to stay updated with the upcoming name changes, I recommend everyone to click "follow" here on indiedb or subscribe to the mailing list on the site: spacesimulator.net/voyagerproject.

Thanks for the support Caleb! :)

Big Thank You for update! :-) I have already subscribed to mailing list, i am not sure, is it working? :) But I am following here on IndieDB anyway.
My best wishes for this project progress in future!
P.S.: second screenshot from the top probably will go to my desktop wallpaper for some time :)
P.P.S.: be sure flightstick/HOTAS control is in early and good tested :)

Yes it is working but I don't send updates since 2015. I was a lot busy and also blocked because of the name issues. With the new name I will be more active also with the mailing list. Thanks a lot for the encouragement! :)

Great progress man! It's been a long time but it's great to hear from you :) Thank you!

It looks really good for a one man work.

Univoyager looks awesome! But i have a question : "Will it have drm and where i can download/buy the game?"=)