Max, STEVE and you coming into 2015 together! Want to see how we do it? Dev tools revealed!

Posted by DonleyTimeFoundation on Feb 15th, 2015

Welcome back to our weekly dev blog update! This week we're peeling back the curtain a little and showing you the magic behind the scenes. I'll be straight with you and say the reason the game is moving along so well is the great testing tools we created.

First off though - let's check out the work on the Command Center main room - YOUR main room in the game!

We've been adding ambient touches to the room. This is your first stop in the game and where you hang out with Max and Steve. This week we updated the window with animations and gave Max and Steve a gloss pass.

As you know we have a lot of bosses and boss parts. To test things like animations, how well they match each other and general firing patterns we created a boss testing room where we can trigger all that stuff. In it we can mix and match parts as well as trigger various animations. Some examples:

We can randomly jumble parts together to check how various thing match. We can also select any part (like the head or the main weapon) and cycle through all the variations.

As you can probably surmise - there is a LOT of dialog in the game and all that talking needs to be checked and tested. We have tools for that too. You can trigger any dialog (in game or Command Center bases) from the Dialog testing room. VERY helpful for putting the finishing touches and checking formatting.

A snap from one of the levels with some giant boss wreckage from previous battles. Oh yeah, this shiz has happened before and left remains for you to see.

A lot of what we are going for in the game is to a) give you something cool to see b) hand out story elements and hints for you to discover and interpret for yourself. 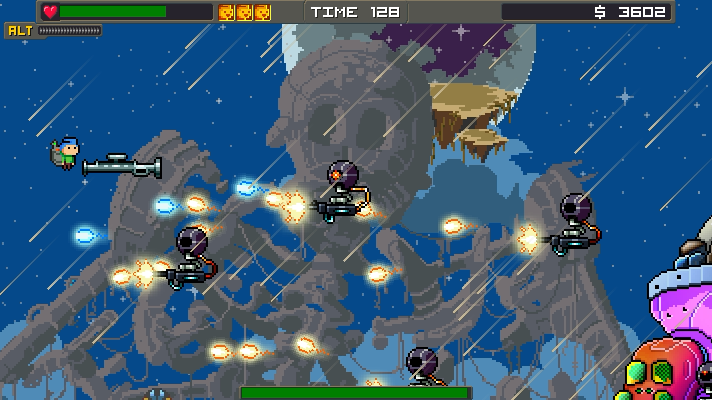 Part 5 of my Making a Game Article is up at Indie Game Riot!

The Latest article from my series on making games is up at Indie Game Riot. Check it out!

A sneak peek at NEXT week's article!

You can use Excel, Notepad, your favorite mail program… even paper! Whatever works. The idea is you have an easy to access place to jot things down as you think of them. I started carrying a small Moleskin everywhere (really any small notebook will do). Most of the time this gets filled with movie recommendations, songs and various ideas I have or hear during the day. There are great programs with Android and iTunes (like Google Keep) which serve the same function on your smart phone.

Ok – so you have the program or journal. The best thing I have found is to just start using it for ALL your ideas and notes. Write everything down you think of. Maybe you have some gameplay idea after seeing a movie. Write it down as soon as you can. Maybe you woke up from a dream with an awesome Boss design. Write that down immediately (keep that list nearby).

You need to stop with the “I gotta remember to do that” crap. Most of the time you will forget and anyone who has been in game development has a few stories about idea they just forgot which were “so awesome if I could only remember”. Notebooks and note taking will dramatically increase your happiness as a side benefit. How you ask? Well, less remembering to do and less forgetting is, of course, less work for you and that is always a nice thing. Also – you will learn to collect ideas efficiently as you write things down.

That’s all for this session and tune in next week for another look at our progress!

Remember to LIVE YOUR DREAMS folks!