As most of the people following the mod have known, I was hit with a virus/hack attack last week. This is why the patch has taken longer to come out, as it required a full reformat (just to be safe, since I am making files for the general public), and once again I am back to producing files! 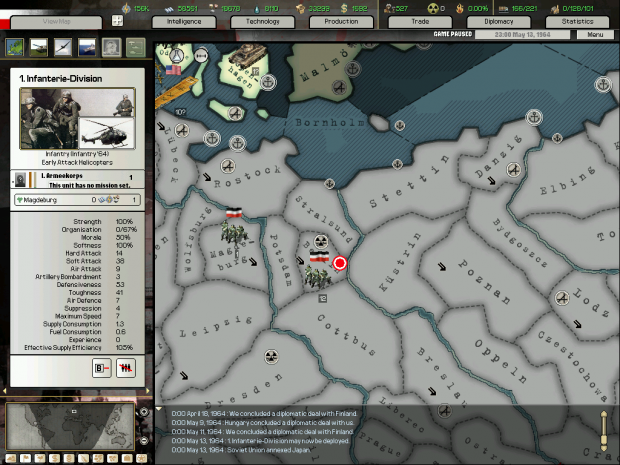 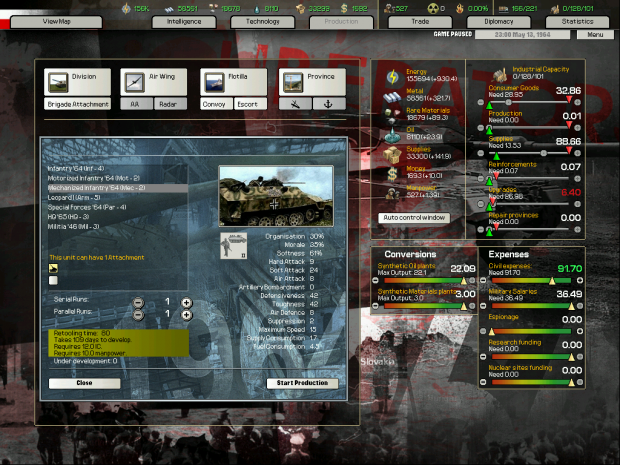 Now, for the information on the patch. I've done some significant updates to the scenario. Transports and Escorts have been given to all sea-faring nations, so that they may conduct their overseas trade. This was an oversight that led to many issues in the first release, mainly being the lack of trade!

Secondly, I've thrown in some new brigades. Transport and Attack helicopters for infantry (I may expand attack helicopters to be attached to other units, I am not sure yet, depends on balancing). Technicals for militia units, gunships for close air support units, and suppy depots for HQ units.


I often forget I am not releasing a perfect game off the bat, and that this is an Alpha and it needs to be tested. I was finding myself making constant updates, and I soon forgot that these changes need to be made in patches that are not 2 months apart!

Vincent has also thrown in an awesome little surprise for us to enjoy :). Well, that is all for this update. I hope you enjoy the patch!

err those pictures are bugged btw.

But I hope this is that mod I heard about where the Germans get all the cool 1960s stuff like Helicopters and nukes.

Nice to see some interest :)

Germany is slowly getting beefed up. I'm trying to make sure they are uber good without destroying the balance.

Nobody has nukes yet, because I'm trying to stop the AI from using them right off the bat.

As for the image bug with the news post, I'm not sure what is causing that.

some bad expirences with german ai nukin' the crap outta your mates?^^ i liked your AAR and i'm certainly gonna test this mod soon ;)
keep up the good work :)


btw: how does hitler smile?

yes! finally... I've read your AAR, and I must have this mod!

i have a idea for you Feuersturm1964 you now at 1963 in the canada they have big political problem in the QUEBEC cant you make the event in the story line the quebec with the FLQ movement cant be a country.answer me more faster you can.

There are planned events for something simmilar. In the AAR there was a Quebec uprising after the defeat of Allied forces in Spain in 1953. That uprising was defeated. In future planned events, human or AI players might take poor political choices which may/may not lead to another uprising.

Same goes for the USA ;)

Hope that answers your question.

thanks for answer me. this time the quebec gonna be a country not just a province YEAH. if i cant be i gonna annex the CANADA mouahahahahaha.thanks again
Feuersturm1964.