Post news RSS #1 Devlog – Nirvana: how we got to Beta with zero experience in game development

Nirvana is a game where you get to experience reincarnation and different lives, all with a tinder-like mechanic for simple, yet crucial, decision making.

This is Shay from Gold-Tusks here, co-creator and content writer of the upcoming game Nirvana. We are releasing our Beta this week after a year and a half of hard work, and we would like to share with you how we made it happen, even though none of us had any experience in making video games – We hope it will encourage you to make your idea for a video game come true, even if you have no idea how to start.

Nirvana is a game where you play a soul and get to experience life, get old, die and live again, in a cycle that continues for 1,500 years. Each year you will get to make a decision which will affect the rest of your current lifetime. That means that each life is unique and affected by your decisions.

It is a card game with mechanics that resemble those of Tinder – Swipe the card right or left to make a decision. Your general goal is to reach Nirvana, and you must understand how to do it with the help of a lost soul you will meet along the way. All that while you must also take care of your needs – Health, Happiness, Popularity, and Money – in order to live and gather as many experiences as you can.

The idea for the game came to me after watching Rick and Morty season’s 2 episode 2, where Rick and Morty go to Blips and Chitz to play some video game. There Morty got sucked into the life of Roy in a virtual game, going through an entire life of a different person. I knew I could never pull something like that off, but I also knew that this kind of game has to exist!

After playing the brilliant Reigns I knew I could make my idea come true with the same type of game mechanics, but the problem is that I am not a programmer, and that's where Doron, came into the picture. Together we started making this game with a single JSON file which I had to write manually. That means inserting each and every card into a notepad and wishing there will not be any bugs. Needless to say, this was very ineffective, so we made a simple HTML page to allow me to add and edit cards more easily.

A writer and a programmer – what about design?

The game was originally planned to include funny drawings of every card situation, and at that time it was only Doron and me working on it. I don’t know how to draw, so Doron took it upon himself to take care of it. We gave up the idea when we realized we will need several hundreds of drawings, and that didn't leave enough time for programming. Other than that, this goal was too ambitious since each and every drawing needed to give an extra punchline to the text, and it didn't always work. We scrapped that idea and decided to stick with text only, but we still needed to add some graphics to the UI.

That’s when Dima came in. Dima took the game to a whole new level with his ideas. He came with a head full of them, and we had several designs to choose from. After a quick survey we ran through, we decided to stick with pixel art, and little by little Dima started adding new things to the UI.

As soon as we reached several hundred of cards and a few extra packs we realized that we had to upgrade our card making system again, and that's where Liran, the second programmer, joined the team. Before Liran came we had to export and import JSON files manually, meaning I would send one to Doron every time I added new cards I wanted to test out. Liran made us a system that operates on a server, and what was a very simple string-based system became one that had menus, drop down lists and tables, which made keeping track of bugs much easier, and improved our working method in general.

After Liran finished with that, he started working on a Unity version of the game, which will be released to IOS and Steam at a later date.

Beta version – What do we hope to achieve? 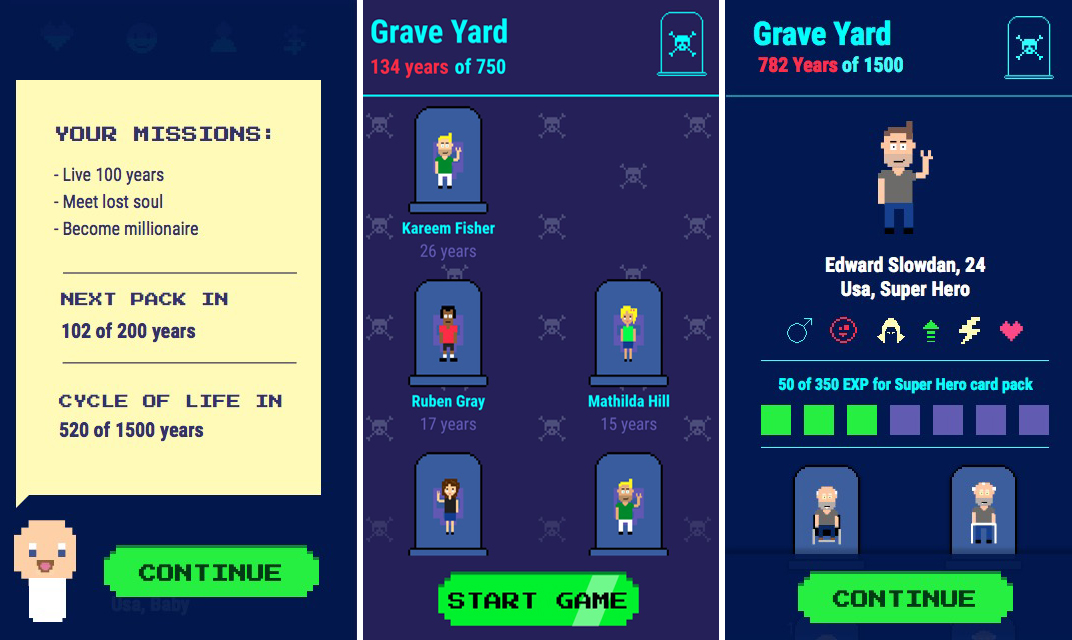 We had Alpha tests about half a year ago, where we got some very important feedback about bugs, what people liked and what they did not like. We worked on improving the game mechanics, mainly making it easier so that players can get to older ages more easily and experience them more often. We also made several new backgrounds, added an avatar of the player and recurring characters, made icons for properties you collect as you play and fixed bugs and grammar issues.

We added a Feedback button to the Beta game, where users can share their thoughts with us. Every feedback can help make this game better for its final release. If you want to become a Beta tester, just keep following us and we will post a link in our next update, plus a more in-depth look at the stages we made to create this game with no experience. In the meantime, you can follow us on Facebook/Twitter/YouTube/Instagram to get updates when and after the Beta releases.