World in War: Vietnam is an ambitious mod project that brings the Vietnam War to Men of War. You will follow the stories of 6 American infantrymen, from State-side bootcamp to the horrors of jungle warfare during the Tet Offensive. 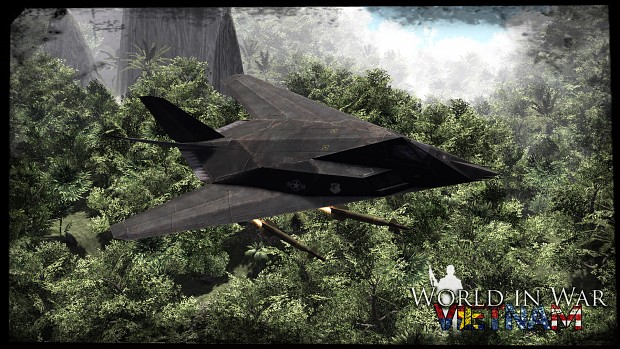 My mind was just blown away, also is the pilot giving a troll face?

It looks like the AA weapon IS the ground. (The ridiculous terrain in the background)

There is only one AA weapon in this image.

Now I cant see none again.

Yeah, and Dani Zoltan, who shot it down, was Hungarian. He holds a part of the plane in his home as a trophy.

Hold on, wasn't the F-117 prototyped 2 years after the Vietnam War ended?
P.S. Awesome to see aircraft incorporated by the way, awesome job.

WHAT IS EQUAL TO THIS DEADLY PLANE FOR THE ENEMY ???

can we see a video with this in action please?

OMG IT IS A TROLL FACE!!

I see Zero, but I do see that the picture is named "thegame".

Epic Eyegasm!
Can you report this as "To Epic"? lol
AND btw, its not aobut this picture now, but besides sewers, can you also fight in tunnels?

I'm not sure if the F 117 was available or entered into service during the Vietnam War.Maybe more accurate could be the SR 71 than the F 117

I love that bomber

P.S. A reward for anyone that can count ALL AA weapons on the ground!

Update. This was an early April Fools joke. The F117 was not even conceived during our timeframe. It first flew way after the Vietnam War.

There are NO AA weapons on the picture. :D

Pilot does wear a trollface, and the picture is named thegame.

Kudos for those who noticed it ;)

And a side note. While the F117 and its GBU27 smartbombs won't appear in SP or MP, it will be included in Editor for private use. :)