OiM II (With Fire and Sword II) develops ideas of precursor and in many respects similiar to it. Some aspects of the mod stays the same, but many of them will change. Another engine of Medieval II and later date of campaign start (first With Fire and Sword 2: Total War started in the year of 1569 , this mod starts in 1618) - not only factors that affects the difference. Who played in first WFaS, of course, will feel nostalgia, and it'll be almost completely new to rookie players. There are many interesting stuff prepared for both categories of players. 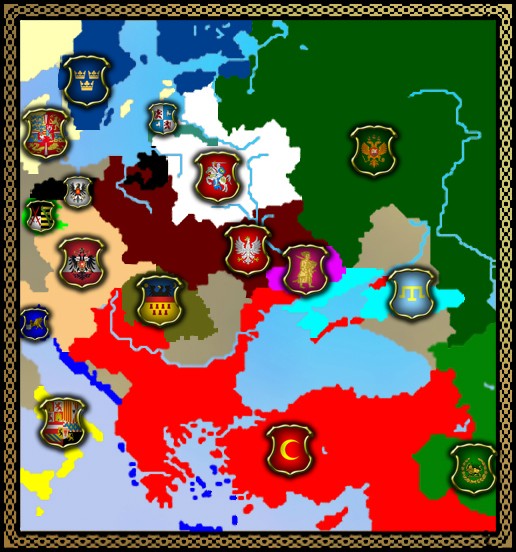 Story of With Fire and Sword 2 unfolds in 17 - 18 centuries, to be exact, since 1618 till 1700 year. While plaing we'll take part in many conflicts and try on the crown of one of many rulers of that time period. There is wide choice of them, because WfaS II map covers the territory from central Germany in the West to Caspian Sea in the East, and from Sweden in the North to Siria in the South.

Playable factions in this mod's assemblage:

As we see in the states roster - total war geography will be wide enough. In WfaS II you can easily simulate events of 30 years war, establishment of Zaporizhian Sich, Osman's invasion into Balkan, "The Deluge", First Nothern War and much more at the same time. Though no one forces you to keep histiricity, and, for example, playing for the Sweden you can attack Safavids on the other side of the map...however, restoration of authenticity of that age, of course, become main visiting card of the mod. It's impossible in single campaighn to prevent AI actions and to negotiate with it, but plaing Hot-seat it is possible to play few local histical wars at the same time in one campaign! This is a gift for Hot-Seat players and fans of histirical reconstruction indeed.

Sure, each faction has it's own advantages and disadvantages, own features, unique troop tree , mentioning all of them needs separate article.

As we said before, developers reconstructed atmosphere and historical likelihood very considerably. In WfaS II there are likelihood local map with existed at that
moment towns, armies, warlords.

As you can see, modmakers included in WfaS II almost every state, that affected political situation and redivision of the world at this time period. Developers artfully keep balance between histirical authenticity and gameplay, not allowing historical thoroughness to interfere game balance and vice-versa. We know many mods, that developers made boring and uninteresting to play in, trying to get
absolute historical authenticity. Fortunately, this mod is far from it.

Good morning I have a problem with downloading this mod. Well, every time I click to download the file it downloads me (theoretically) a mod with the Google icon, and then when I move it to the appropriate folder it opens to me Google Chrome and downloads the same file again. And so on and on. Could someone explain to me what is caused by this error and how to eliminate it? I hope everything is written clearly because my English is not the best

this is my first time downloading mods from here. How does it work?

That's fantastic, thank you. Glad to see there's still a bit of life in this cool mod.

Np, I'm not a member of the modding team and I linked to their uploads directly.

Why are Poland and Lithuania seperate? at that time they were in union.

Theoretically, the Crown of the Kingdom of Poland and the Grand Duchy of Lithuania had separate treasuries, armies, and policy. The only things they had in common were the monarch and foreign relations. So yeah, I'd say their division in the mod is actually accurate.

That way you'd have to break down Spain into Castille and Aragon, then GB into Scotland and England, etc. etc.

GB is split into England and Scotland, I believe, you can toggle that (as well as the Poland-Lithuania division) at the start of the campaign. And I believe in the 16th century and onward, the Kingdom of Aragon was largely titular, possessing its own court system and parliament, but not an army nor its own finances.

I think in the 1.3 version at least, Portugal in turn may be part of Spain upon game's start, as for the historical accuracy of that - I don't really know much about the history of Portugal at all.

Mount and Blade: With Fire and Sword for MTW2