Uskaarj a RTS mod set in the bitter conflict between humans and the skaarj. Who will you choose to play, the proud humans in their struggle to repel the skaarj from space or will you choose the Skaarj in their quest to conquer all of known space that is for you to choose

After several months of hard testing and dedicated bug crushing, we are proud to announce the release of the new stable version of USkaarj2k4 RTS is ready for download and playing.

What is USkaarj2k4?
For all you neophytes Uskaarj2k4 is a real time strategy total conversion for UT2004 that converts everything in regular UT2k4 into a real time strategy game like C&C Generals or Starcraft. Including base-building, resource collection and controlling units on a battlefield. So what are you waiting for?

If anyone wants to put up a mirror for the mod let me know at barnEbiss@beyondunreal.com
And I will add it to the list of download links. We have a server up and running the logon information for the server is up on our IRC chat channel. Our channel is on Gamesurgenet channel #uskaarj

Drop by let us know what you think of the new build and find fellow uskaarj players to play with on the server. The new version of uskaarj uses its own Exe for loading uskaarj and no longer uses a BAT file to load. Also we have coded an update program into uskaarj so it will now check our server for the latest version of uskaarj and download it automatically. This can be turned off if you do not want uskaarj checking for the latest version when you load uskaarj.

We also have a sneak peek today of the upcoming main menu for USkaarj2k4 menu at the below link. 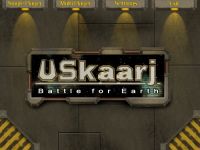 We are working on getting the last stuff finished on the main menu then we will lease small update that will include the new main menu as we work on getting the rest of stuff in game.
Like research system and power system for buildings

Today I am happy to show the first look at the up and coming Skaarj race HQ building. Our modeler is currently skinning the model and we are hoping to...

Over the last few day we have been doing testing of a new uskaarj2k4 patch, this new patch has made uskaarj stable and now able to be played online with...

After about a year and a half stop to all work on the mod, I am happy to announce in the last few months I reactivated the team, and brought two new highly...

Well folks we got the building and everything done in time to get the beta into the contest. In this build these new things have been added building placement...

This version was an in development alpha release of the mod who is unfinished but more advanced than the betas. Enjoy the release :)

This is the Uskaarj 2004 Linux installer for Unreal Tournament 2004

This is the Uskaarj 2004 windows installer for Unreal Tournament 2004

How many more time I need to wait new patch? :)

lol an ut mod rts?awesome could be better than red alert..

Looks nice, going to test it!

Can we play with a bot?

The Forgotten Ending Age of Mythology: The Titans