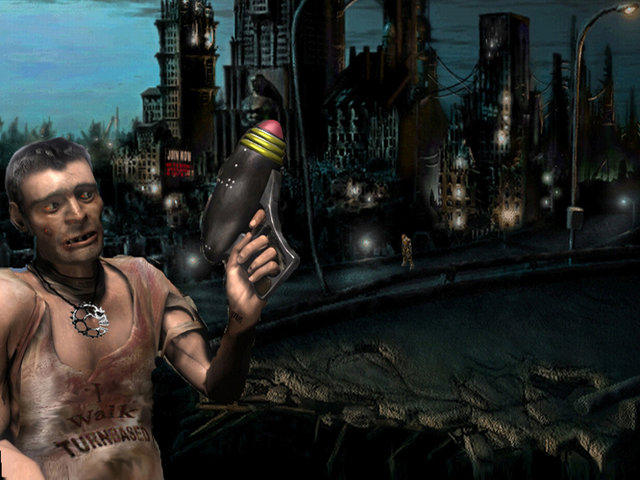 Goal
This Mod tries to balance the game for Multiplayer Death-Matches in Turn-Based Mode. Although it looks like this mode didn't get the same attention from the devs like real-time, there are some things like the way Cars are used and the interrupt system, that are quite well designed and make Multiplayer matches fun to play.

Major Changes
- 26 new levels starting in TB-Mode, each with a unique goal that applies to reach it, making the matches more eventful
- Weight of all items increased
- Armors now have different resistances for each damage type - metal is good against explosion, power armor against energy, enivro(now -> combat-armor) against bullets
- all Drugs have been completely revised, specializing the caused effect. (e.g. voodoo increases critical chance, but lowers several resistances. or buffout slightly raises strenght & agility but seriously reduces a characters luck ) ...
- Drugs and stimpacks have higher chance of overdose, checked against the chars endurance and thus making first-aid and doktor more viable. better forget your all-you-can-eat mentality now
- Poison & antidote added
- Plasma weapons now inflict area-damage
- Some new weapons, explosives, armors and other gadgets
- Critical chance of most weapons lowered to make high luck and critcal chance more attractive for snipers
- In-game descriptions of all items adapted, for most of the changes

Tips and Tricks
- The character will always try to go to a spot on the same level, so if you want to go up one level you should always click directly on the ladder/stair. else he might take another route !
- If some roof blocks your view try selecting other characters of your squad, even the dead ones
- When shooting area weapons its often better to aim at the ground in front of the target so you get better percentages
- Holding Alt while moving will make the char preserve the AP for shooting the currently selected weapon
- Pressing w to immediately stop a characters movement is very useful
- Right-clicking on the Overwatch button lets you choose the percentage the char shoots, likewise right-clicking on the precise shooting icon of your weapon lets you make called shots in Overwatch-mode
- After falling down a ladder the character is sometimes unconscious to long, pressing crouch when it´s his turn helps
- A character using Doctor or First Aid should have enough AP´s left (around 5 or so) to finish the action in his next turn

Campaign Sheet
Included with this Mod are Character sheets to play a continued 2-player campaign. Start out with creating 8 characters with 250 points each. Print out page 3 and 4 of the Campaign.ods file in the tbmod directory and note the actions of your characters during play. After a session open Campaign.ods (with Macros enabled) and fill in the actions for both teams on page 1. When ready press "Update" and note the updated points on your personal sheets. Now prepare your characters with their respective points. Note that you should set Allow XP to off and points limit to 150000 in the options of the host.

House Rules
We usually play this mod in Indiviual Turn-based mode with 100% friendly fire and custom characters. Additionally we ban the "Bonus Move" and "Action Boy" Perks and allow every weapon only one time among the squad. Oh and muling isn't very well received either.

Linux
You need wine v1.1.41 or later, the earlier versions had a bug that prevented playing fullscreen. For Multiplayer you need to follow these instructions: Wiki.winehq.org

Credits
This mod was made by hadack and guz with some art and inspiration from No Mutants Allowed and the Fallout Community in general and of course Moddb itself.

Bugfix release. Unzip the tbmod-1.5.1.zip into your Fallout Tactics folder Start the mod with the tbmod.bat or start FT with the command: BOS.exe -path...

Can i play against AI with this mod on your custom maps ?

we use the following setting for hosting a game :

DuneWars Revival is a quality mod for Civ IV-BTS based on the Dune Universe created by Frank Herbert. It is an improvement on the popular DuneWars mod...

A simple modification of the UI based on Raapys's DarkUI Mod. It is currently under development. The mod makes UI more uniform, with black/grey and blue...

Would you like to play a turn based strategy Sci-Fi Mod, settle and fight on Earth, Sea and into the Orbit? Then you should download Conflict on Chiron...

Reverse engineer Horatio cloning technology and use it for your own means: Purify your empire by genetically altering aliens. Grow your population by...