This mod will start were the original Half Life2 episode 2 ended, with the death of Alyx her father. She became sick by the loss and layes in bed. Magnusson needs Gordon to look for Kleiner, because he has disapeared. The last time he did see Kleiner was when he spoke about going to the Borealis to blow the ship and everything inside up. Gordon needs to travel by airplane to the North pole and find Kleiner, and save the ship. Will you be on time? And will you find out what the secret cargo is that is inside the ship? 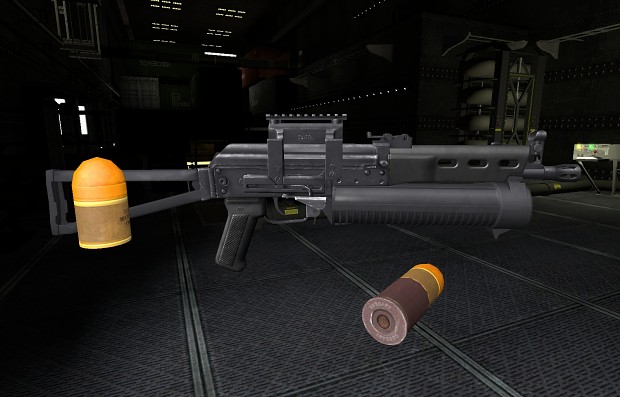 The final SMG1 replacement, with new grenades that can be fired as secondary weapon, (left mouse button).

forgive me if i offend you, but that's not a grenade launcher,that it is a 50rnd magazine tube..

Its actually a 64rd mag, that said the old smg used to fire out of a tiny barrel that made no sense eather so who cares

Throughout the last 3 years i have been using and showing a lot of different weapons in this mod, just so i could test them. Now that the end is in sight i have finally looked in to which weapons would actually be used in this mod, (of course can everyone change them in to other weapons when they are not satisfied with the ones i did choose).

On the 10 screens you see all weapons except the crowbar replacement, am still not sure which one i will choose to replace that one. It will be replaced, not with another crowbar version but probably with some kind of wrench. The sniper crossbow will be replaced with the sniper rifle.

In the movie i will update with this new news update shows the weapons from all angles, and you can see them in action to show there new animations. All weapons were taken from Gamebana and COD, with the permission of there developers, (except the COD ones).

Josh C. Zemlinsky was a HUGE help with choosen and making the weapons fit in this mod, he edited the animations, and compiled/combined everything the sniper rifle, shotgun, SMG1 and RPG replacement.
Also did he make all new ammo box replacements, the RPG rockets and all the ammunition cases. This mod never would have such lovely weapons if it was not for him to help me out with this.
Thanks again Josh!

Also do you see a screen of the new Gordon model, when i added the old one 2 years ago or so i was really pleased with it. But when i did find the new one i noticed how poorly skinned it was, also was the model itself not all that well shaped. The new Gordon was made by Deviant Picture Films, and of course did he give permission to use his awesome Gordon in Episode 3.

(please check the latest movie for all weapons and Gordon in action).

Thanks for reading,
Leon
(SPYmaps)