Team Fortress is an online action game that features a wide variety of character classes -- from Medic to Spy to Demolition Man -- enlisted in a unique style of online team warfare. Originally released in 1996 by Austrailian based Team Fortress Software, TF has been downloaded by millions of people as it has evolved and become one of the most popular online action games of all time. The latest incarnation of this multiplayer phenomenon, Team Fortress 1.5, is now available as a free add-on for Half-Life and adds an advanced user-interface system (V-GUI), new networking and server technologies, new scenarios, and spectator modes. Team Fortress 1.5 also serves as a point of reference for those who are interested in what Valve has in store for the upcoming Team Fortress 2: Brotherhood of Arms. Players can upgrade to Team Fortress 1.5 via Half-Life's in game update tool or by downloading the latest Half-Life update available from Sierra.com.

This is the old Team Fortress Classic 1.5 release for Half-Life WON. Can't be used with Steam. 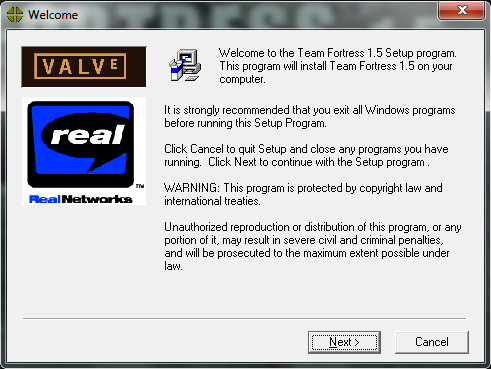 I can't use this. It said that I need a valid CD key to use Team Fortress Classic. Uninstalling!!!

Try holding 'a' for the cd key.
Otherwise just google it.

You have non-steam counter-strike or something? put tfc folder in it and run via bat file:
start hl.exe -game tfc

Is this the very first release or something? It's so old that it doesn't even have new models.

Do you have the WON version of Half-Life installed?
If so, did you install TFC in the same location as Half-Life WON?

GRRR I WANT TO PLAY FULL NOT DEMO NEED HELP

Guys the only way to play it is to move the folder tfc to xash3D because xash is based on mods WON classics and maybe porter xash andoid to be able to play it online and if you want to get it in full version is download tfc non-steam to have it complete but eye without the files cliend.dll and the tfc.dll for the tfc non-steam is based on the encryption and the tfc classic no.

Although there are so much bugs, very annoying and rare, but if anyone of you have a good knowledge of coding then the mod will be either playable or you may also do it independent on the basis of xash3D.

THIS DOSENT WORK IT CRASHED

It won't let me enter the CD key anymore. Please help if you have any info on how to fix this. Thanks in advance!