In order to make the mod work properly it is obligatory to delete the file C:\Users\*username*\Documents\My Games\men of war - assault squad 2\profiles\*some numbers*\settings.set !

General information
Tanks only is a multiplayer modification relying solely on 5x5 tank battles. Each player has one tank in their control which can be one of 5 different classes. This mod features over 100 types of tanks which date back to the time period since 1939 to 1942 (another 100 tanks dating back to the time period since 1943 to 1946 are planned to be added to the mod later). All tanks are combined in Tech trees. Each player has to follow these branches from the earliest and weakest machines to the most powerful ones in order to progress. 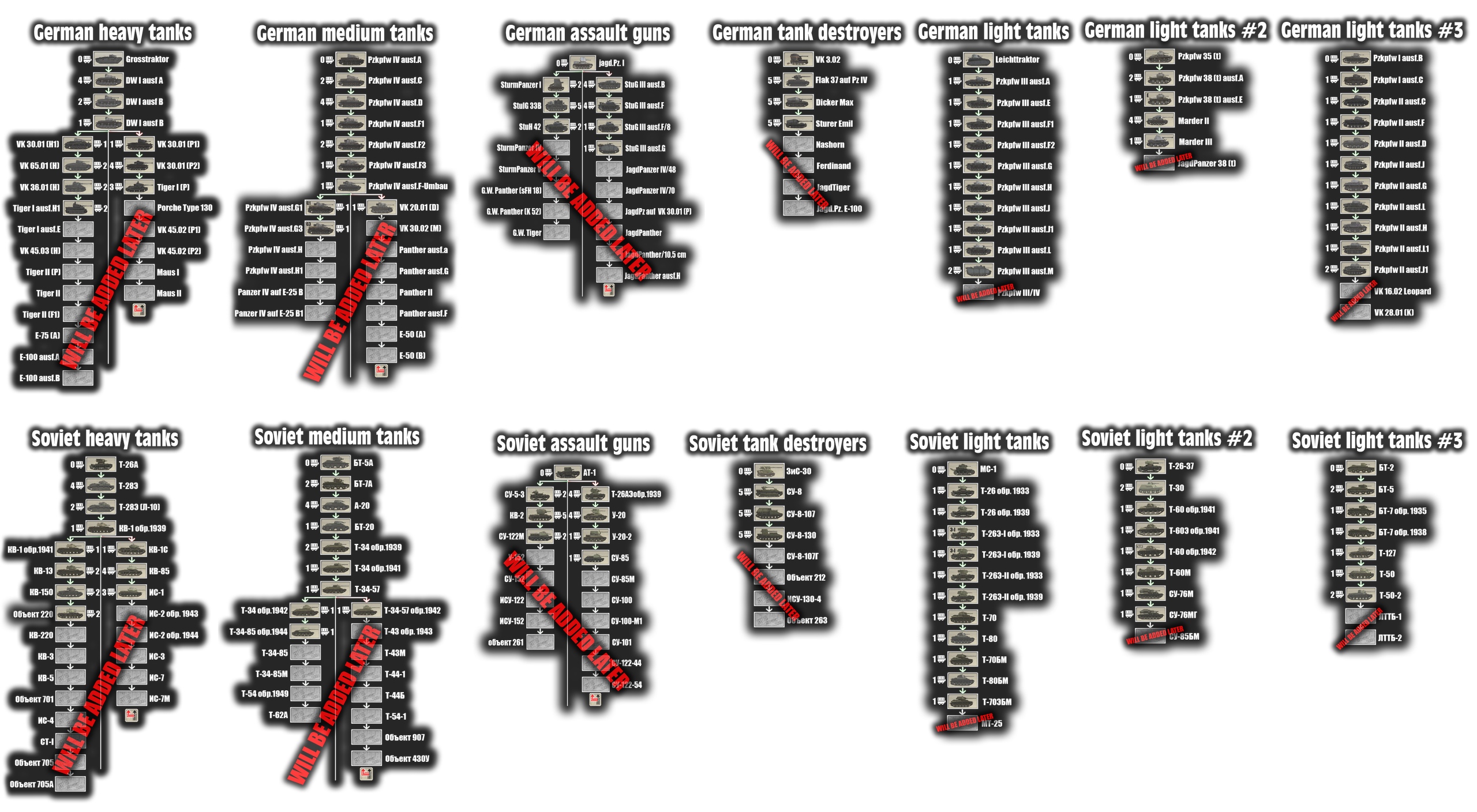 This mod features a number of new unique gaming mechanics such as:
1) Upgrade your tank right during the battle by collecting trailers which spawn instead of broken tanks.

After choosing the tank class in the beginning of a round player will start the game using the weakest machine of its class. To obtain a more powerful tank player will need to collect trailers some of which are already located on the map at the start of the match. But most of them can be obtained only by destroying enemy team’s tanks. A number of trailers necessary to change your tank for a better one is shown above each tank. 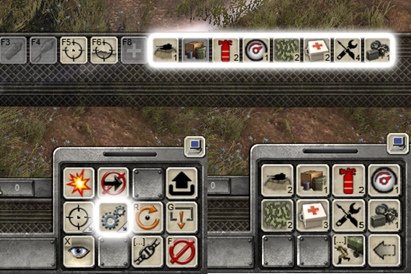 After collecting a trailer several items can be added in player’s machine inventory. If activated they will temporarily boost different characteristics of the tank (it depends on type of that particular bonus you obtained, total amount of them in this mod is 8). For example, using a bonus you can increase tank’s mobility, durability of its modules, crew survivability, armour resistance or fix your tank without disembarkation of crew members.

Besides the key points there are resource points on the map. You can replenish your ammo or fuel there but in order to do this you will need to conquer and hold them.

All teams' units besides the tanks (infantry and towed guns) are controlled by AI. AI also controls the tanks which were not chosen by the players which allows gamers to play in incomplete or unequal teams. AI is programmed to help players conquer points and destroy enemy’s units.

This mod uses a completely new machine damage system made from scratch. During this system development process the main goal was to minimally change this gameplay feature whilst making it more intuitive. New system fixes many issues of the old one:
- its functioning visibility is improved;
- damage accumulation system was added (each hit of a module increases the possibility of its failure in case of a new hit);
- hitbox detail level was icnreased in order to make visual and physical models of tanks correspoding to each other;
- mounted structural elements (such as wheels, boxes, shields etc.) hiboxes were added;
- the amount of elements, which can be torn off by a hit, was increased;
- HE damage mechanics was changed;
and a number of different changes was made.

Unfortunately, this mod can be launched only on maps designed especially for this mod and only in “conquest of territories” mode. These maps are marked in the following way: 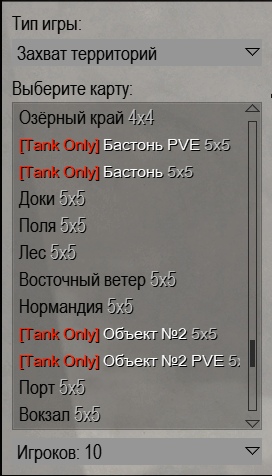 For now this mod has only 3 maps but there will be more added in the future.

In order to make the mod work properly it is obligatory to delete the file C:\Users\*username*\Documents\My Games\men of war - assault squad 2\profiles\*some numbers*\settings.set !

Special version of the Tanks Only MOD for PC with low performance. Disabled spawn AI-infantry and AI-tanks. Point Control game mode only. Maps of this...

How to change the language pls reply FASSTTTt

excellent mod, but can you create a campaign with the new units? to ask for reinforcement or something like that, we will see your opinion, greetings

Will be nice if you can add su-85b, including a direct fire anti-tank and an indirect fire field gun option, just like how su-76 behaves in Robz mod.

It is easy to make, but for what purpose?

Think of it like a multi-role vehicle, both a tank destroyer with accurate
gun and a self-propelled gun with long-range but poor dispersion. Basically an up-gunned su-76.

Why should I think so? Personally, I think of the SU-85B only as a light anti-tank self-propelled gun, not artillery.

because the gun used on su-85b is the same gun as the d-44 field gun. D-44 field gun was made to replace the ageing zis-3 as both an anti-tank And a field gun.Su-85b shares the same chassis with su-76m which permits a high gun elevation to be used as light self-propelled artillery.

Describing d-44 "The barrel was developed from that of the T-34-85 tank and was capable of firing 20–25 high-explosive (HE), armor-piercing, and high-explosive antitank (HEAT) projectiles per minute."Janes (1982), The American Arsenal, German Artillery of World War Two
t-34/85 uses d5t, while su-85m uses another version of the same gun 85 mm D-5S-85A

The fact that these two guns were built on the same cannon absolutely does not say anything about their role on the battlefield.

You ask the wrong one. The SU-76 was indeed a self-propelled gun (assault gun), but the SU-85B was originally created as a light tank destroyer. Why so? I dont know. I did not design it.

Multiplayer
Tags
Embed Buttons
Link to Tank Only MOD by selecting a button and using the embed code provided more...