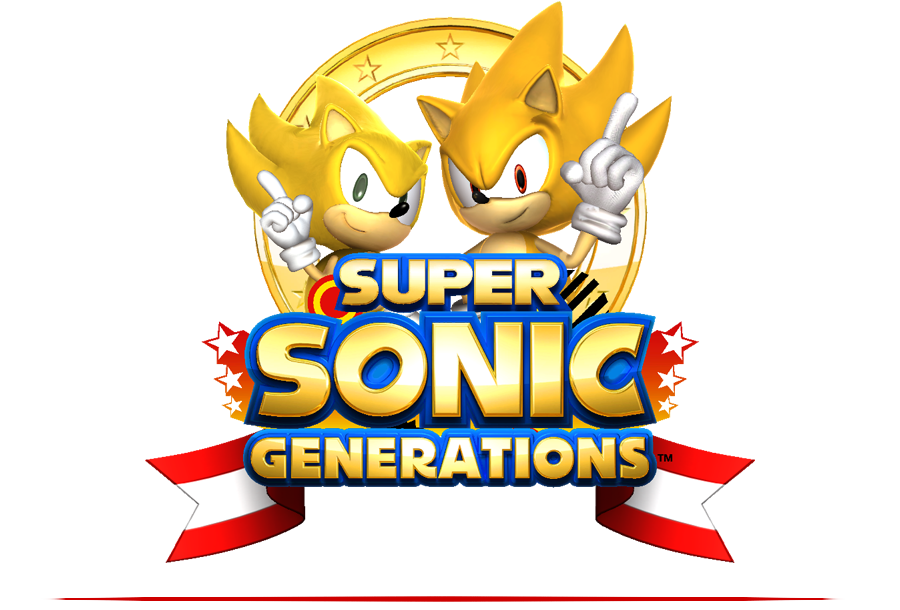 In this PC-exclusive graphics mod for Sonic Generations, "Super" Forms are the norm. And then the game actually plays a bit differently once you start using skills and the Hyper Sonic transformation...

BEFORE DOWNLOADING THIS MOD, MAKE SURE TO READ THE "INSTRUCTIONS" AND "FREQUENTLY ASKED QUESTIONS" sections of this page.

As of the 2016 Edition update, Super Sonic Generations is "technically" 4 mods.

The "Super Sonic Generations: Lite Version" is similar to the Full Version, but with none of the NPC models altered, and with only a small portion of the game's HUD assets have been remade. It's suitable for use alongside custom stage mods.

Additionally, the "Super Sonic Generations: Save File" mod includes 10 normally impossible skill sets. A list of those is included in the mod's README text file.

Before using this mod, you will need to have the following things:

If you need help figuring out how to use SonicGMI, the ModDB page for the Sonic Generations Unleashed Project features instructions for SonicGMI.

Q: Will you ever port this mod to the Playstation 3 or Xbox 360 versions of Sonic Generations?
A: Seeing how I don't own either of those consoles (and thus, have no way of making or testing mods on them,) I'm probably never going to get around to porting this mod onto those versions of the game.

Q: I extracted the mod to the correct location, enabled it in SonicGMI, but the mod doesn't work in-game. Why is it not working?
A: I have no way of knowing for sure. If you haven't downloaded any available updates for the game, download them. If you're using a version of the game that isn't English/Spanish/German/Italian/French/Japanese, then there may be a few minor compatibility issues. If you don't have the Casino Night Pinabll DLC, you may encounter problems with the pre-made save file.

Q: Can this mod be used alongside other character mods (such as Shadow Generations, Sonic Generations: Episode Metal, etc.)?
A: No.

Q: When using the Power Sneakers as Modern Sonic, the music stops playing. Why is that happening?
A: That is a "mostly" un-fixable glitch with the skill, since Modern Sonic was never intended to be able to use it. You can work around this by using any of the unlockable songs when playing with Power Sneakers, since the game will properly play the Sonic Adventure 1 speed-up music like it does when using unlockable music in Classic Sonic's stages.

Q: Those skill sets in the Save File mod are pretty neat. Is there any way I could use them in a different save file?
A: You can give yourself ANY skill set combination by using MainMemory's Generations Skill Edit program.
You'll need to open your Sonic Generations save file within the program. After doing so, you can then give yourself any combination of skills in each of the game's 10 skill sets.

Q: Is there a way to "fix" the ridiculous ring drain the Super Sonic skill has in the original game?
A: This simple mod I made can do that for you.

Q: Is there a way to use the Hyper Sonic transformation without making Sonic (and other characters) look like their Super Forms?
A: That's what my Sonic Generations: Hyper Sonic Edition mod is for. I've even updated it to use the new Hyper Sonic models (and the updated Hyper Sonic graphical effects.)

Q: This mod is good!/great!/awesome!/outstanding!/amazing! Would you mind if I share this mod?
A: Go ahead. Just make sure to credit me (JoeTE) for making the mod, and post a link to either this ModDB page, all 3 alternative download links, or the "release" video I made on my Youtube Channel (which can be found here.)

Q: Where can I find any news and/or updates for this mod (when they happen, of course.)?
A: I typically post news via videos on my Youtube Channel: JoeTEStrikesBack, and I sometimes post news on my Tumblr Blog: JoeTEgamemods.
I may occasionally post updates on this ModDB page as well.

After 3 years, I've finally made a new update for this mod (along with an update for the Sonic Generations: Hyper Sonic Edition variant mod, which lets you use the Hyper Sonic transformation without any other model/graphical alterations.)

For this new release, I've provided an on-site download for Super Sonic Generations (along with 3 alternative off-site download links just in-case) because a lot of users didn't notice that I'd previously only provided a download off-site (which they would have noticed if they had just read the mod's description.)

I've also updated the Header image and logo to match up with the mod's updated graphics, and I've updated the description with new images and some more up-to-date information. I've also "cleaned up" the mod's comments section (which, at the time of this post, ended up being a complete wipe of all previous comments.) I also removed all of the now outdated screenshots (and will be uploading new ones soon.)

In this modded version of Sonic Generations, Super Forms are the norm.

I was playing and sonic, shadow and silver's eyes were faint