Stargate: Battlefront Pegasus is a Stargate themed mod for Star Wars: Battlefront II. It gives you the possibility to fight an intense space battle between the Tau'ri and the Wraith faction known from the famous TV shows Stargate SG-1 and Stargate Atlantis.
You can fight in huge space battles, which we want to make as varied as possible. You can not only go in battle with fighters and bombers but you also have the possibility to control massive frigate ships such as the Wraith Cruiser or a Daedalus class ship.We're also working on various tactical ship systems whose destruction will grant you, in contrast to the stock game, unique bonuses for your team.

The capital ship of the Tau'ri is a heavily armed battle carrier: The E.S.F. SOL. In its huge hangar bay it carries a massive amount of fighters and bombers.
The Wraith capital is nothing less than the giant Hive itself.

This mod is being developed by by a current and a former mamber of the SGMG who created Stargate: The Pegasus Chronicles for Empire at War Forces of Corruption but both projects are independent from each other.

If you have questions, comments, criticism or suggestions don't hesitate to tell us in the general comments section.
If you wish to contribute just shoot us a pm - we are still looking for modelers and animators. 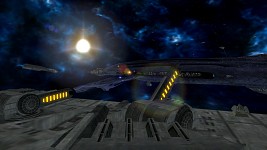 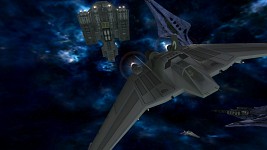 In Stargate: Battlefront Pegasus you can control massive frigate ships.
In order to control the Wraith frigates (Cruiser and Destroyer) simply enter the Beam Platforms close to the northern command post of the hangar (following the radar map orientation).
The ship shown above the platform shows the ship you will enter. If there isn't a ship displayed it is currently not on the field and can't be entered.
To control the Tau'ri Daedalus class ships (BC-304) look western of their central CP, you'll find a platform in the left bay.
There are also the chairs that can be used to control the remote turrets (MPG, Railgun and Missile Turret).

Changes since the last release:

Take command of a cruiser, it´s time for the big guns!

Finally, version 2 of Stargate: Battlefront Pegasus is ready for release! This mod gives you the possibility to fight an intense space battle between...

Hello, fellow modders! Wolf and I are proud to introduce a new modding project taking place in the Stargate universe: Stargate: Battlefront! It shows...

dam shame this mod had to die... it was surely unique compared to the rest...

This is one of the most promising projects, are you still up to it?

I assume the puddle jumper will be the tau'ri Transport ship? Either way great mod. I would suggest a redesign to the wraith hanger. By that i mean having only one pad where the darts spawn and just behind the pad is a door leading into the wraith control systems location. There is already a pad that leads towards 2 wraith doors, use that pad for the darts and make it so the doors open to the hive control systems

Also maybeeee add boarding ... I can land in the enemy but there is no systems to take out (eg. shields,weapons systems [maybe multiple systems for this that affect certin guns] ect ect.) no way i can get in their fighters... and

do the tau'ri have any defence guns on their capitol ship? i mean i was on the human side and i tried getting into the tau'ri ship and i got in simple piece of cake... on the other team trying to get on the human ship ... damn near impossible with all the defense guns

HAD THE MOST FUN WITH THIS THAN ANY OTHER MOD.

ONLY concerns are the Hive ships lack of weapons (compared to the Sol's anti fighter turrets practically covering it)
And The hive ship being so MASSIVE on scale and no fighters to be seen for quite a run... I ran in cirlces trying to get to a ship just to have an AI take it then have a ship spawn from where i was just runnning from... need more ships in there.

And i couldnt land inside the Sol With a hive fighter.... would not let me..

The Force Unleashed II and a Half Star Wars Battlefront II