A new mod was released for Galactic Civilizations 2, which is one of the best turn based strategy games to come out lately. The MOD is called Star Trek Vs. Star Wars. It features all the major races and starships from the Star Trek series and the Star Wars movies. If you have ever wondered who would control the Galaxy with a war of Star Trek and Star Wars races then this is the mod for you. Please note: you need the Twilight Arnor expansion pack to play this mod. To install it, just unzip everything to the following directory: C:\Program Files\Stardock Games\Galactic Civilizations II - Ultimate Edition\Twilight\Mods\Default

This is the Star Trek Vs. Star Wars Mod the Original Version. 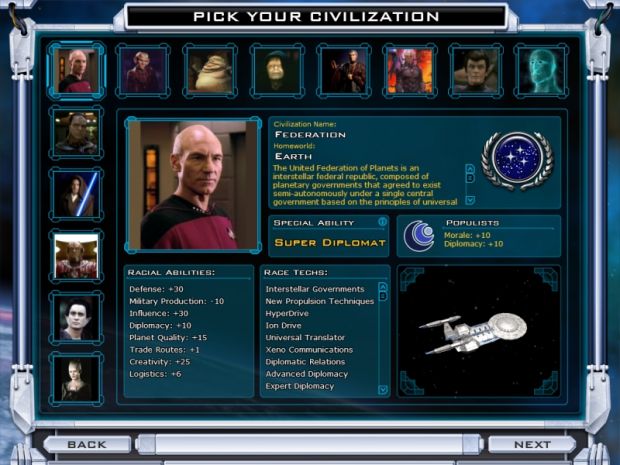 How is this different from the other file?

Is the "expansion" to be added onto this or what?

Yes the Expansion is to be added to this file. First install this file which is the full 6.0 version and then you can install the 6.0 expansion.

I downloaded the following files:

Then I looked at what directory the mods run from in my version of GalCiv2 (I do NOT have your "C:\Program Files\Stardock Games\Galactic Civilizations II - Ultimate Edition\Twilight\Mods\Default" path, because mine isn't the "Ultimate Edition" - I bought TOA as a seperate expansion after Gold Edition).

Here's the directory I unzipped the files to:

When I enable mods in Twilight of Arnor and restart the program, the mod seems to be working. I start a new game and use default galaxy size (small), default race (Picard) and spend the attribute points, then hit next and get the "loading" for a while. Then poof! Galciv crashes. This happens to me over and over. I've never seen the game actually start.

When I unzip the following it works fine (at least for starting a minimal galazy):


But if I unzip this file, it crashes:

So my question is, do I need to download all the expansions individually since UltimateSTvsSW.zip seems to be broken for me?

Now I REALLY want to play! :) Thanks!

It looks like the following work for me (for starting a new game):

The following result in a crash if I try to start a new game:

Note that I'm running Vista Ultimate (32-bit), and I only play the game in a non-Admin account.

P.S. For the expansions that work, for some reason none of the Star Trek ships show up for me. This is really a shame, since I was looking forward to seeing these!]

I am sorry to hear about the game crashing on you. I know that Vista is pretty picky with programs so I am thinking that there must be some minor XML errors in Expansion packs 4 and 5 to cause the crashes. Have you tried downloading and installing the Titanium Edition. I got most of the errors worked out with that edition. You can download that at:
Moddb.com

Thanks superbob17 - I think the gold version fixed most of my crashing problems.

I've played a little with textures - really love your mod. Here's a texture for death star (based on your borgpl.png and and image I found here Google.com and another one I can't find again). If you like it use it any way you like: Docs.google.com

I also added earth and mars (with occasional success), and a texture for Vong which meant having to change some of the xml files too, so they are all zipped here: