The Game Spring : Modern Warfare is based on Spring 1944. This mod will feature the classic gamemodes of Spring 1944. Planned are new units and a different build/upgrade system. Mass modern troops or mechanized units will march through the maps and will listen to your command. Vehicles in a complete new generation like Leopards, Abrams or the Leclercs will counter Asian units like the K-2 or Type 99.

Heavy metal and modern airforces will rule the maps of Spring. Inspirations from CnC Generals and Spring 1944 as well as other games will be the main features of this mod.

Finally we received the first texture. After alot of messing around our Texture artists managed to finish the first texture package for our NATO Headquarter. We see a camouflag tent and next to it a metal body together with the radar. The biggest problem was the DDS format but we managed to handle the problems. The object is currently not in-game and we'll wait for the new Spring 1944 release. We've done some Logos for the Teams, too. But at the moment I can't upload them too. So stay cool.

Until now we will go on doing textures for the current models, depending on the time we can spend in the mod we are maybe able to release a testbuild in some months. 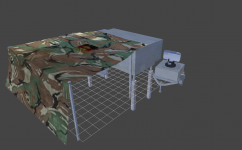 Status? Summer break? How its going?

The project will go on! For sure we will have some breaks between the development but we will go on.

Some general things and when we can expect the first playable build.

A list of Factions and some descriptions to every Team of the Fractions!

"Construct and Build" thats one of the new gameplay elements! As well as one more new unit and the first building in game.

I like the game concept. But I think the title is a little mis leading if the game is set in near future and uses some science fiction weaponry. Maybe "21st Century warfare" might fit better or something to indicate a somewhat futuristic setting?

With Call Of Duty: Modern Warfare 2, the meaning of modern was rather obscured. In the context of game development, I think he can get away with calling this Modern.

Doesn't fit "Modern" as "nearly futuristic" warfare? I mean? What are 34 years? (2010-2044) Well its nothing. It will not be that futuristic. Anyways I don't think about to change the Name.

yeah? Something you wanna say?

I don't know how much polygons SPRING can handle...but don't you think that some of these models are kinda un-detailed?

Spring can handle a lot, but there is a functional limit on what one man can do.

Well not really undetailed poly wise, but texture-wise. Even the newest RTS CnC3 series are using models with similar poly counts, but a good texture is what really counts. I am sure it is a WIP and will get better with time.

Yes thats true some don't go over 1000 polys. A Texture could make it much more detailed. The next thing is UV mapping which is not easy if everything is very detailed so I try to give buildings simple shapes. But at the momment I concentrate more on the Code and stuff. Vehicles will have much more details.