A quick look at some screenshots from Emeraldus, the first planet in Sonic With A Gun.

Jazz Jackrabbit 1 and Sonic 1 are just two of the many games that begin with a grassland level: Diamondus for Jazz, and Green Hill Zone for Sonic. Emeraldus incorporates nods to both, but also starts off the mod with a reminder that this is Jazz Jackrabbit, and in Jazz Jackrabbit you can expect combat. There are six distinct kinds of enemies scattered around Emeraldus, more than in any other planet, though all can be disposed of by a well-placed bullet or two. (If you don't see all six in your playthrough, you'll need to try playing at a harder difficulty!) 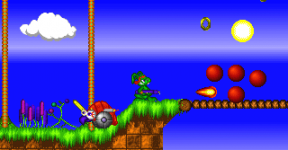 This screenshot pretty much sums up Sonic With A Gun. The graphics are based on the normal Jazz Jackrabbit ones, though often more elaborate, especially by the time of the third and fourth planets when the complexity really jumps up a level. Enemies are familiar from Sonic, but often take on some new twists to fit their new surroundings. And your gun is your best defense, although as the mod progresses, you'll be presented with more and more obstacles that don't respond so easily to bullets. 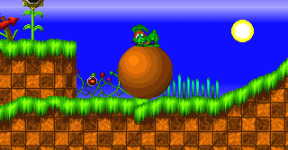 Sonic With A Gun casts a wide net for its inspirations, so you'll need to be a pretty hardcore Sonic nerd to recognize everything. This big orange ball (which wasn't present in the 2010 demo) comes from early prototypes of Sonic 1, and rather than hurting you, carries you across enemies or makes it possible for you to jump up to new heights. 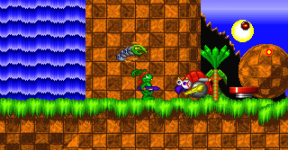 In Emeraldus you're able to walk in front of certain walls, making for a tiered level design unlike anything in the original Jazz 1 episodes. For the most part all you have to do is go right, but there are multiple ways of getting from here to there, and if you want 100% completion some exploration will be required. 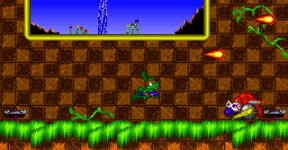 Green Hill Zone in Sonic 1 on the Genesis/Megadrive didn't end up including these darkened caves and yellow-bordered windows, but its portable Game Gear/Sega Master System version did, and so does Emeraldus. Although the caves don't show up much until the second act, if you do find yourself fallen into one, take it easy, for there are enemies and spikes waiting to leech your health away.