A number of reviewers criticized Sniper: Ghost Warrior 3 for having a crafting system that was completely redundant. With the 0.49 release, I have attempted to resolve this core design flaw.

SGW3 undercuts its resource economy in multiple ways, which I have attempted to address in the Improvement Project.

In the vanilla game, you are not allowed to run out of pistol ammo. If you return to your safehouse and have less than 20 bullets, the game will top you up to a minimum of 20 bullets.

Fixed by removing the minimum values for various ammo types. Now you can actually run out of ammo.

The game offers a crafting system. Gather resources as you explore the world to craft much needed ammunition, gadgets, and healing items. Want to craft some pills? You'll need to hunt some animals for organic material. What a good idea! This gives players an incentive to...

Or you could just press F to refill all your ammo and gadgets for a moderate fee. Why explore the world? Why care about how many bullets you have left? Just press F whenever you return to your safehouse to make more bullets appear like magic. It's not like you're ever gonna run out of money, either. The game gives you ludicrous quantities of money. Every NPC you loot is carrying that sweet plastic/paper.

Fixed by removing the ability to buy bullets, gadgets, and medical supplies using money. You want some pills? You better hope you find them when looting a body, or you'll be forced to victimize the wildlife for raw ingredients. Either way, someone (or something)'s gotta die. 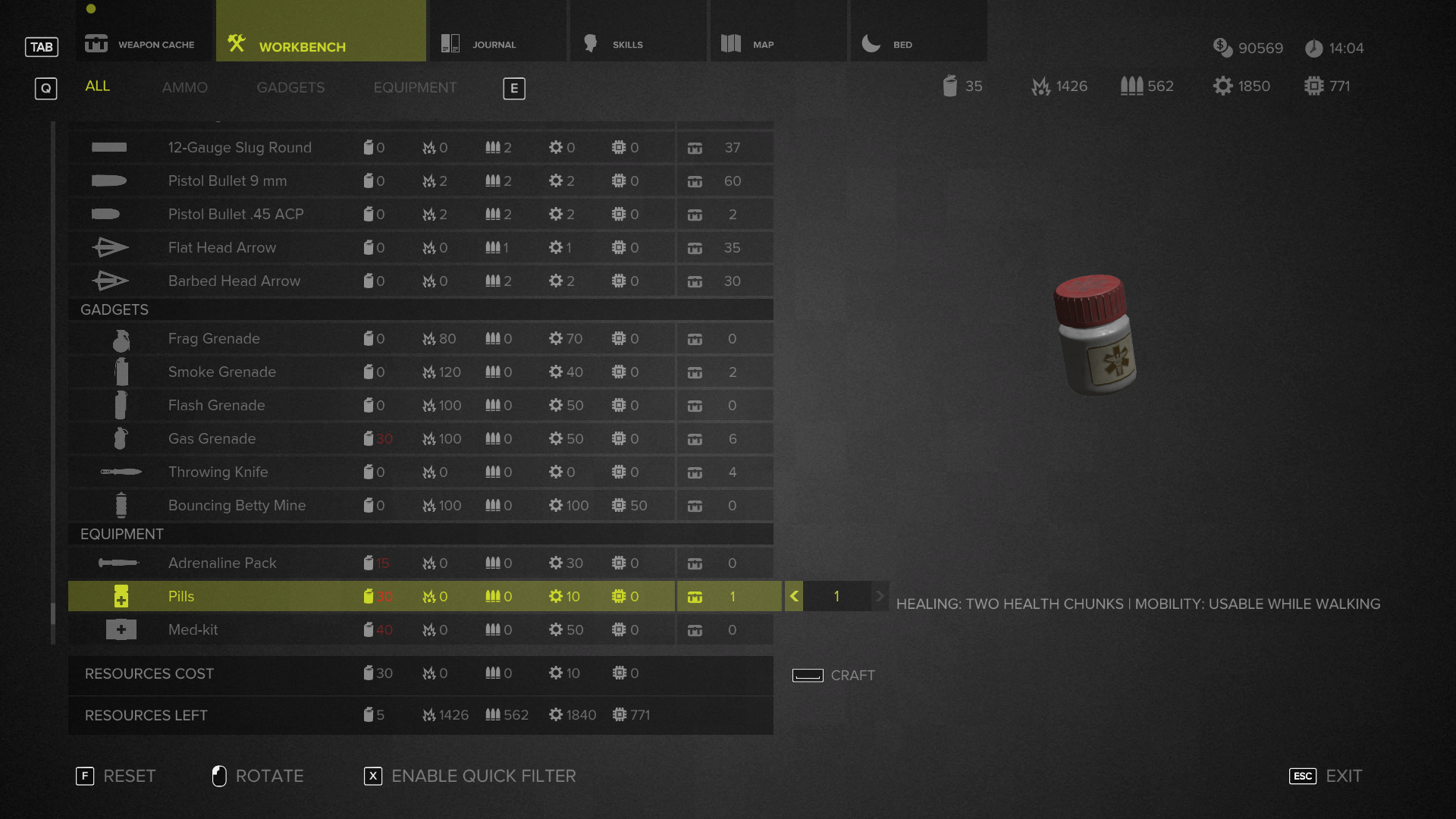 In the vanilla game, you can't carry many items. This causes some major problems with not being able to stock up on resources properly. As a stopgap measure I have dramatically increased the quantity of bullets and items that the player can carry. This is a compromise driven by the fact I can't realistically change how the game's inventory system works since I don't have access to the C++ code. I can't even change the behavior where your character picks up guns if you have the same type of gun in your possession.

What I have done, however, is reduce looting drop rates and the quantities of ammo found in NPC dropped weapons. Instead of being able to get 100+ bullets just by shooting a few guys and stealing their guns, you now get something like 10-20 bullets instead.

It's my hope that these changes will significantly improve how the game feels to play. Creating more tension. Creating an incentive to explore the world, loot, and generally manage the usage of the resources on your person instead of taking them for granted.