World with 4 continents and large amount of big and small islands is divided between few superpowers (Hallowed Empire with Tyado Empire, Ellarayteymar and Taydar), few great powers (Eresia, New Chaepitian Republic) and many countries which crave to become new masters of the world.

I create it alone so it willn't be fast.

Imagine that your country is a model of democracy and pacifism. And there are no advisers to boost fascism or communism. And you are in difficult accessible terrain, maybe even generally on a separate continent. You probably just have to sit and sleep.

But no. In SMod I tried to add an alternative way for fans of slowly and quietly pressing the world, perhaps even without war. What could be better than to arrogate to yourself all the sources of valuable resources and enjoy a wonderful show, where other giants are fighting among themselves until their death?

Influence denotes the economic power of your country, its involvement and the ability to influence global processes.

The base increase of influence points is negligible — a maximum of 0.0025 per hour. However, it increases in proportion to the number of civilian factories. Nevertheless, you need a lot - up to 20 factories in international relations you will be just a fly. Also, the points increase is affected by stability (if it's 50%, you will receive only 50% of the deserved IP) and your foreign policy doctrine - the isolationism doctrine will lower the increase in influence points by half, however for minors it will be a way to protect from the raking hands of the imperialists - interactions with isolationist countries using influence will either be unavailable or cost twice as much. 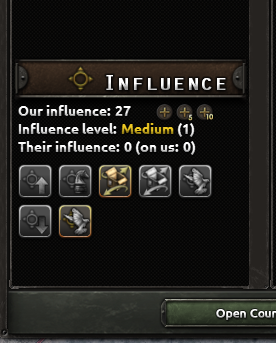 Each country has two separate indicators - local influence and level of influence.

The level of influence also determines access to some of the interactions.

Increasing the level of influence, you increase trade relations and the country's favor, that is, having risen from 0 to 1, you can count on the country to grant you the military acces and sign a non-aggression pact, and on the 2nd - to join your alliance.