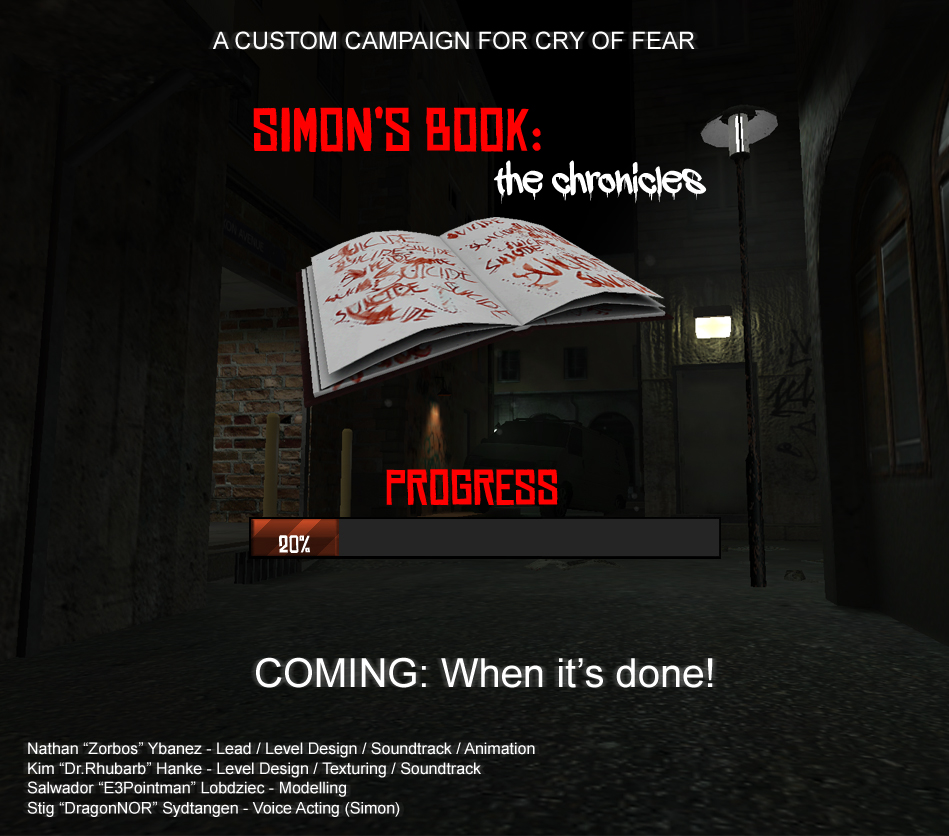 Welcome to the new page!

Welcome to the new page!


This is where I will be posting most of my progress although you can also view the Cry of Fear Forum Topic at Cry-of-fear.com or at Volcom-mapping.com

What is Simon's Book: The Chronicles?


Simon's Book: The Chronicles is a Single Player campaign addon for Cry of Fear that chronicles Simon's journey through depression and dementia. The campaign aims to provide an old-school horror experience reminiscent of games like Silent Hill and Resident Evil, spanning across 3 separate "Episodes" which Simon wrote about in his book. Each episode aims to be about 1 to 2 hours long. The campaign features an all original soundtrack, as well as custom weapons, items, character animations, and textures/models.

The story takes place in the months after Simon's accident. Doctor Purnell has instructed him to record his thoughts and experiences into his own book which serves to be an outlet for his depression. Chronicles simply extends the possibility of there being more stories that Simon wrote about that were not elaborated on in the main story.

That being said, none of the episodes are connected together directly. At the beginning of the game, the player is put in control of Simon in his house, which serves to be the "hub" for his adventures. The decision of what order to play the episodes in lies solely in the hands of the player. There is no exact order they need to be completed in, as long as all are completed at one point. This leaves a lot of freedom for the player to experience the campaign at his or her leisure.


- Full length soundtrack
- Dynamic storyline which allows the player to dictate his or her own path
- 3 to 4 hours of gameplay
- Custom weapons and items
- All new textures, animations, and models

Hello, it's very unfortunate that you abandoned the Simon's Book project: The Chronicles

I hope this isn't dead it sounds really cool

the mod is not out wait for the out

the last update being over a year ago, i think it's dead..i hope i'm wrong

It's on halt & I left the development. Don't know what Zorbos will do in the future.

Is this actually dead?

Leave us Cry of Fear

The Hole Cry of Fear