The main theme for SS1 and SSHD is "Adventure", at least that's how I interpreted the game always. However, I also thought that this aspect is actually quite weak in the games, but there's much potential. I also consider its Netricsa to be the most superior for story telling and most importantly, lore; so this is also one aspect my project will extend. One more thing that bothered me was the Xbox version of Serious Sam 1. Sure, it was a lot more sillier, but it was a complete game, a complete story with cutscenes and the two halves in one. This version of the game made the original PC versions look very incomplete, so due to this, the Xbox version inspired the basic "layout" of this project, both for SSHD and SS3.

The mod will be released in two part to optimize its production and lower the workload and stress for the developers. Right now, I'm focusing on the First Part of this project that will include:

- Merging the Legend of the Beast Campaign into the main Egypt campaign.
- Fifteen new levels added to the Egypt Campaign.
- Due to all this, the Egypt campaign have been split into two episodes.
- Both episodes now start with an intro cutscene level, that expands the story and lore of the game. More emphasis will be placed on the events in SS3, what the Sirians did in Ancient Egypt, and revealing the mystery of why Sam meets no humans during his travels in the past.
- These intro cutscenes will be narrated by a friend I know, and will be told in an epic story style, the narrator often referring to Sam as "The Hero".
- Both episodes will have long Netricsa essays that tell the backstory and the events of SS3 in more detail. Some enemy info will also change to reflect on their counterparts in SS3.
- A few new enemy variations will appear on the new levels, but mostly no new changes to the old levels.
- Fixed the enemy spawn errors on the levels.
- The mysterious hole in Hatshepsut will be fixed and made into a proper secret.
- The Great Pyramid level naturally continuing into South America.
- Various minor fixes. 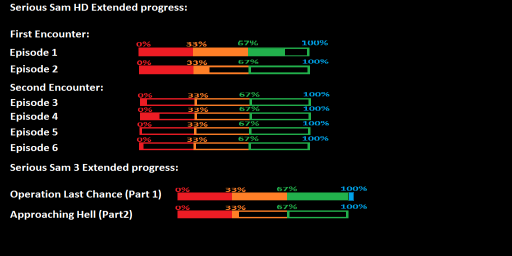 While it seems like a lot from the plans, this project will be not that hard to make. It's just seems large, because the point of the project is to make the game feel larger. This notion will continue into the Second Part of the project as well, with greater emphasis.

- The episodes in TSE will get the same treatment as the TFE half in Part 1. The intro cutscene level for South America will be the TSE intro remade, just with a few changes so it fits more.
- There will be more emphasis on the story of the secret organization what we known as "Arc-el-Magi" from the last episode. There will be references to them in Part 1 as well, but I won't spoil that yet. There will be also notions of how the Sirians got to these other Ancient Cultures, and how they afflicted them and their culture. The South American episode will follow in the footsteps of a single Sirian's rise to glory and godhood.
- There will be new levels, normal and secret for all the episodes. South America will receive 1-2 normal levels and a secret level. Persia will receive a secret level; Medieval will receive 2 normal levels.
- The amount of normal levels in the South American episode is uncertain because of a plan to make an Uncharted 2 like Train level. It may happen to be too hard to implement, and with that, the level may never be made.
- A new 4-levels long episode between Persia and Medieval: Feudal Japan.

Where is the downloadable file? It's been a couple of years and no download? Why do you guys even post the MOD if you don't have a file for download? I mean it's useless if you just post news about it. Then it's not a mod because NO FILES YET.
Eh... thought i found some good mods for SSHD but it seems not..

Okay, Who are you who posted my mod here without my permission? Who stole my name, just because I had an older account here before I used the name "Solais"?

Brings classic N64 levels from various titles on the platform including Donkey Kong 64 and Super Mario 64. Also included will be a few "Retro" maps from...

When Squidward is let go of his job at the Krusty Krab, his dissatisfaction with life is at its zenith. After years of torment from his buffoon neighbours...

Tired of Half-Life being the same on every playthrough? This mod randomizes everything, including weapons, enemies, voice lines, and more.

Worst Half-Life 2 mod ever made. You play as Gasmask Citizen that must do things and shooty shoot thingies and defeat evil in the most epic style.

Glitch life is a half-life 1 randomizer which uses all of the assets of any half life 1 valve game or mod and mix all of everything into a entire mod...