No we haven't forgotten about this, the truth is quite the contrary.

"We have not forgotten about the Apocalypse Minimod, it is actually in a constant state of debate between the members of the development team. We came to the conclusion that it was, for lack of a better word, boring. Let me explain, in the games as shown in our interview with our close friends at the Community Battlecast Primetime (Seriously, subscribe to those guys on Youtube), a pattern was noticed. One Player would constantly have over 10,000 credits and access to every unit in their arsenal while the other would only have little over 100 credits and an extremely limited number of units to build (if they are lucky enough to afford them). This led to incredibly one sided games. We don't want that. Its the last thing we want to do. A game shouldn't punish someone into oblivion for simply loosing a flag. 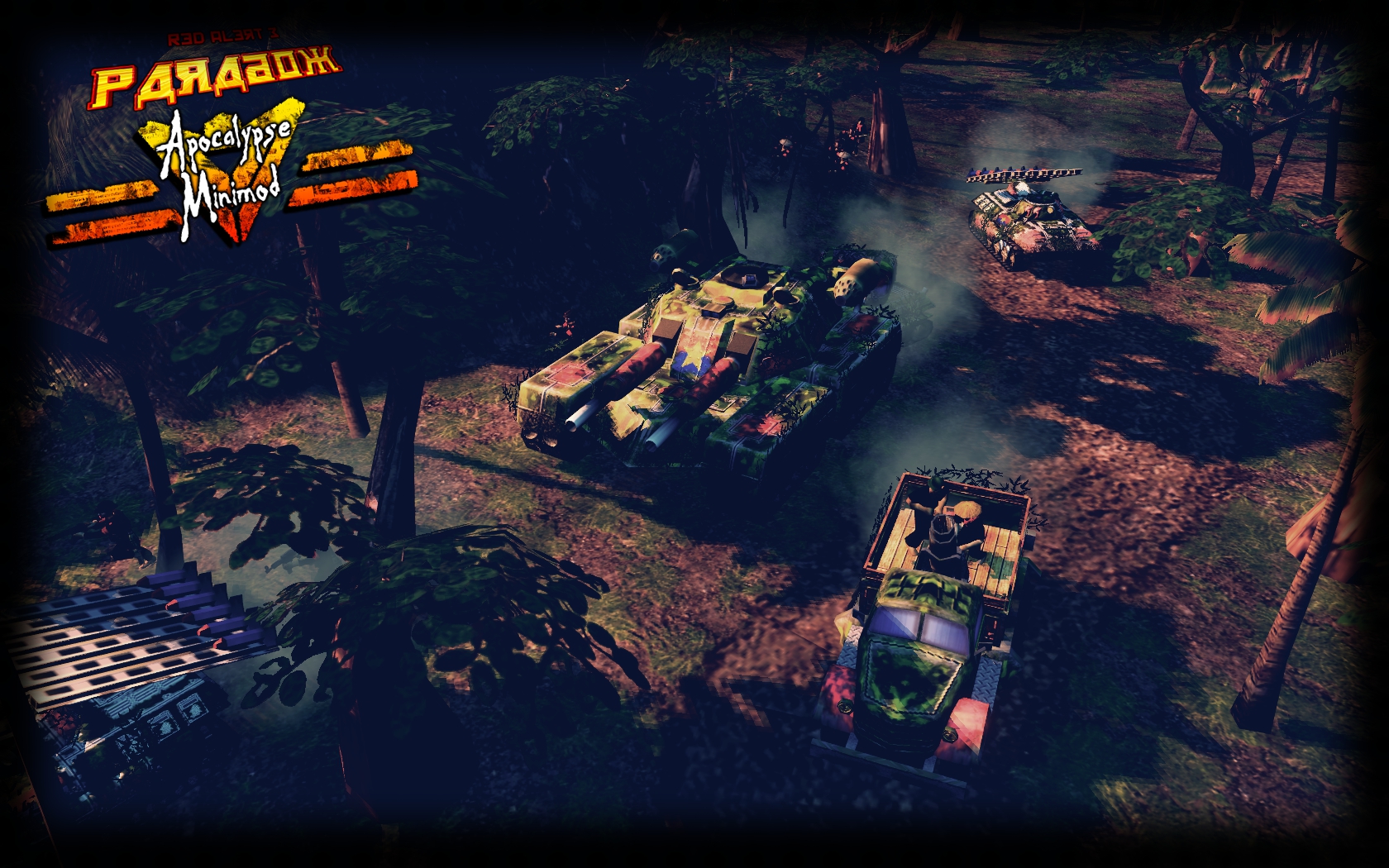 As currently, both the ARVN and Viet Cong start with a Headquarters, and anything needed to produce units (this is usually included in the Headquarters). In addition to that however (and this is new), each faction receives a Refinery from a supporting Major Faction, Allies for the ARVN and Soviets for the Viet Cong. Flags that were once scattered across the map are now Ore Nodes, filled with ore for the harvest of your collectors. In addition to your current arsenals as listed on the wiki, each faction Headquarters can produce an Expansion and Collector vehicle. They do as each implies. The expansion vehicle allows a commander to expand to Ore Nodes and Collectors allow for you to collect the useful resources.

Teching and Protocols work differently as well. Rather than units being unlocked by flag, they are instead researched at the Headquarters. Protocols and Reinforcements are unlocked by teching as well. We have many other features to discuss as well. Stay tuned in the coming days. Until then Paradoxians, stay tuned!

Eh, so pretty much you're changing the experimental new game mode into a regular game :(

At least they have a good reason for it, and it still trims down base-building.

The old one was obviously not good pootis!

If you are looking for other new game modes we're planning on implementing;

Hey, you guys do what you've gotta do if the code doesn't add up.

Alright sounds good to me and probably the rest of us...

Wouldn't it be more simple if the minor factions expansion vehicles deployed into the refinery's, unless your planning on adding other build able stuff.

but you could not publish a demo of the apocalypse, and then ask us our opinion?

I really respect that you guys are taking "fun" so seriously. After all, no matter how amazingly gorgeous everything you've made looks, if it's not fun, it kind of destroys the experience, which is (in my opinion) kinda the trap EA fell into when making RA3 in the first place.

no way, Red alert 3 is so much fun, i spent hours over it and never got bored, missions are great and so are the new units. there is a space for improvement, but seriously an awesome game.

Good to see that you guys take gameplay balance seriously

Why have this huge flashy swf showing tons of awesome stuff, but not having it state in red bold text: "THIS MOD ONLY HAS 4/5:TH OF A FACTION AND NOT YET NEAR BEING WORTH DOWNLOADING"
I mean, this isn't even BETA, this is like... Pre-Alpha.
Look at for example RA2's D-Day, that is a game in beta, with tons of content, metric load of changes etc.
This mod doesn't really have anything worth mentioning yet.
Hell, at first I thought I had downloaded some old version.

You can't compare different game mods, considering RA3 takes much more work to mod. We've improved so much since we started, it would be insulting to use some of our old assets and code, considering how many bugs we had in our first betas.

I kind of like this idea better anyway; makes vehicles more important.

I kind of like this idea better anyway; makes vehicles more important.

i can only get red alert 3 games on desura and there not like what they say on modds.com why.