Approximately one year has passed since the Marked One's story. You are the military Lieutenant Priboi Slipchenko, and you were sent into the Zone... There was a secret organization, called UHSF, and they were responsible for the incident. They had a base at Dead City but the mercenaries wiped them out in the late 80's. The organization fell apart, and the last living members disappeared until today. Somehow this story is connected to the Marked One's story, and you'll eventually find out how. Over 20 important classified documents were hidden in the zone and you will need to find them to complete the puzzle. You will need to be "Sherlock Holmes" and dig deeper in the zone then you have ever done before. This is a re-release of the popular Priboi Story modification released in later January

A complete walkthrough and gameguide for Priboi Story 1.1. If you feel we tricked you somewhere, or you completely lost in the game, you don't understand the story at all, or you don't like adventure type shooters, just want to run thru the game, then this tutorial/walkthru/gameguide is for you. You can read thru the way our mate, Nemo played thru, and if you follow his steps, you will surely complete the story and probably enjoy it too. Format is PDF (16mb high quality) 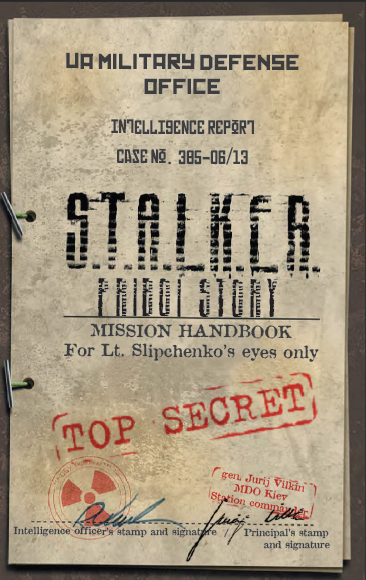 good day to you all, I have been trying to get the priboi walkthrough and click on the download link and all I get is an advert for jobs abroad, am I doing something wrong or has your site been invaded by spam......mickmac

just tried it, it works for me. :) this site is not under our control, we just have an own section. we cant edit anything, just upload.

try it again, it will surely work.

Hi dezodor. Ihave had another go at getting the walkies and still all I get when clicking on download tab is an advert for modjob that over lays the link page, going for close and all the site goes instead, is it possible for you to e,mail me a copy of the walkies, or is it a large file, heres hoping.. mick mack......(domin8te@tiscali.co.uk)

sure i send it no problemz

hi its nemisiskhann again, have you sent the walkies only my machine crashed the other day and all the emails went for a burton, if you didn't i am ever hopfull and i'm sorry about worrying you.....mickmack

WHen I try and open this with acrobat reader I get an error saying that there's a bad encrypt dictionary. Any idea what the problem is?

Ignore that, I updated acrobat reader and it opens it fine now.

Hi, please I need help. I am trying to find the document CNPP Accident 1. According to the walkthrough, it should be somewhere in Agroprom, but I didnt find it anywhere...

check the metal stash at the end of the rail tunnel :)

Hi All
PROBOI STORY
Great game so far BUT have spent many hours in the Sarcophagus looking for the blue box,( found 1st) but at the wish granter I have searched every inch of the roof space and cant find it. the walk through picture isn't all that good. help anyone
as said Great game
Russ

Ps a good snap shot would be great