What is this mod about? Crusader Kings II: Pharaohs & Consuls is a total conversion mod in development for Crusader Kings II and it’s expansions. It is set in the mid 600s BC to the mid 400s AD. The scale of the mod is a total overhaul of Crusader Kings II world map to the time of Antiquity. The mod allows players to take control of well-known historical figures such as Pharaoh Psamtik I, Ashurbanipal, Cyrus the great, Alexander III, Gaius Julius Caesar. Many less well-known figures from the times of Antiquity such as Ardys, the king of Lydia, Teispes Achaemenid of Anshan, Prince Manasseh of the house of David etc are also fully playable and integrated into the world of Pharaohs & Consuls. The Ancient world is carefully and accurately populated by the famous and infamous men and women known to us through the great histories of ancient empires and kingdoms. 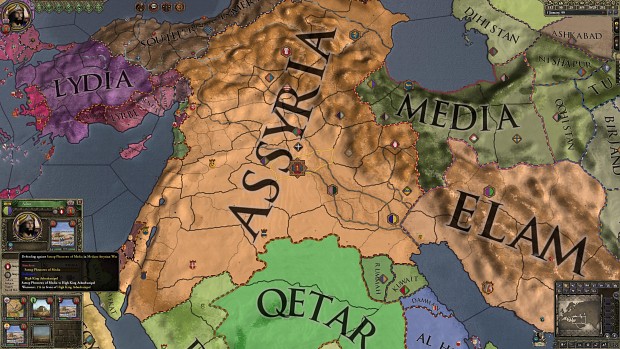 -NOTE this screenshot is a preview of the WIP 653 starting bookmark, all content may and will likely be tweaked and changed as it is in development. :)

Here is a little preview of the 653 BC bookmark for the Assyrian Emperor. As a highly organized political entity, saddled with a large number of vassal states and client kingdoms, the Assyrian Empire will be one of the larger starting factions in the earliest bookmark and will require a skilled player to maintain it from following History's blueprint for it.