In each map there are a number of physics items. The aim of the game is to have the most objects in your team's base before the timer runs out.

Another small update. I noticed that in some maps, such as smash - one team would win then it would be a 7 minute wait for the round to end. So I've added a timer that starts when one team has all the items on the map.

I've also added a couple of new maps sent in by Andy Green. Capture The F is a pretty good one!

I also thought it was pretty dull without firearms - so I've given back the ability to pick them up. Mappers should place them carefully! 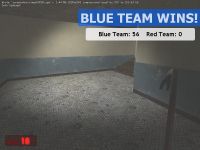 A new beta version of Nine Tenths has been released. Nine Tenths is a Half-Life 2 teamplay mod where the aim is to possess the most items in your base...

Well, beta 1 has served it's purpose. It's shown that it really is more fun WITHOUT guns. Which makes sense - it puts more emphasis on looting...

Download link for the latest build of the mod (b1.2 from Late February 2005): Mediafire.com
Features fixes for SteamPipe. Requires Source SDK Base 2006 installed in order to run.

2016, because I want to feel important in some way too.

2014 Its been FOREVER since someone commented on this. :3

lol, you have really problems with your brain.

This was for a Garrysmod Gamemode :D

the 7th mod for hl2 is dead omg

any servers up? :D

sigh garry it dosn't work just make it a gamemode and settle at that.

Dude, it has been dead for two years about, he DID make it a gamemode in Gmod 9