Medical Problems is a new adventure for The Witcher with two chapters. Each chapter is playable separately and can be understood without playing the other chapter, though of course they're at their best when played together and in order. Your choices have consequences, and which ending you get depends on the combination of choices. In the first chapter, Geralt helps Shani cure an illness that has a darker origin than she realizes. In the second chapter, Geralt must cure a special, created disease that's been specially formulated to overcome a witcher's usual immunity to disease, a disease that will kill Vesemir, Eskel, and Lambert unless Geralt can find the creator of the disease and force him or her to reverse it. Both chapters take place between the events of The Witcher and the events of The Witcher 2.

Geralt has monsters to kill, human lives to save, a mystery to solve, and witcher contracts to fulfill. There are also some ladies to woo, though all but one of those encounters is optional. :-)

A couple of notes:

1. At a few points during the adventure, Geralt will start to walk somewhere by himself. Please let him do so! This is usually a part of the story.

2. Triss tells you not to move while she's teleporting you or while you're using the teleportation scroll that she gives you. Listen to her! Don't move after you've started teleporting until you get where you're going and the teleportation special effect turns off. You don't want Geralt to arrive missing an arm, do you? :-)

Walkthroughs take half of the fun out of a game, so it's only there in case of a playing "emergency." :D If you get stuck or have a question that isn't covered in the installation manual or the hint sheet, ask it in the Medical Problems 2 thread on the Witcher forum, and I'll answer you. 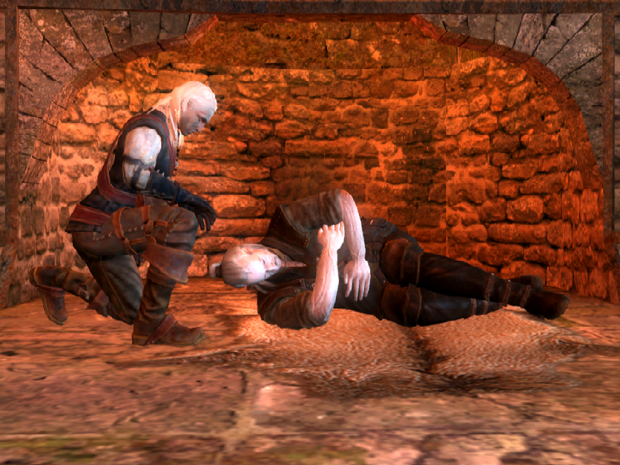 This file is a self-extracting 7zip archive. That means that if you double-click on the file after you've downloaded it, it will unpack itself; you don't have to have 7zip on your computer to be able to unzip it. It's not an installer, though; you'll still need to put the adventure file where it goes. (If you need help installing adventure files, see the Installation Instructions.)

Ah, finally! Congratulations on releasing Medical Problems 2. A very good adventure. I had the pleasure of play-testing an early version and it was very good fun. I can imagine that it is even better now, after a couple of months of polishing and finishing all the little details. I was very impressed by the endings of your adventure. And by many other things as well. I'm glad you made it before the premiere of Witcher 2.

Thanks, hon! I squeezed in just under the wire, having gotten sick at exactly the wrong time. :-)