Levels by the Groovy Intelligent Reject

This is the second version of my Half-Life mod, it has 8 maps to explore(not including the Selection Hub). Every new version of this mod will add at least 4 more maps to the game. This game is heavily inspired by games like LSD Dream Emulator and Yume Nikki.

Yeeeaaah development for this mod is pretty much dead.

Yeeeaaah development for this mod is pretty much dead. 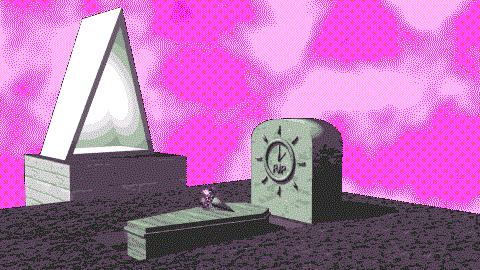 There's not really much to say, NGL a couple weeks after posting that last article some months ago I lost all motivation for working on this. I work on other things now, like I made the 3D art for this article for example, but I'll still dabble in goldsource modding though so don't worry about that. I have a YouTube channel where I'll be posting some stuff (but even then I take forever to post things, but I did made a video a couple days ago sooo) and my cousin and I also made an Instagram thingy where random art stuff is posted.

Working on it was fun while it lasted though. This thing was more of an art project then a game but I'm still proud of it, and I'm glad that so many people liked it. And at least it had potential and actually got onto Moddb rather than sitting on my computer through its entirety. I'm also sorry if anybody felt mislead regarding the development of version 3, I really did think that I was going to pick up on it again, but that didn't happen and I'm sorry for that. If you're reading this, then you've beaten the game, and this is its ending. It might be a sour ending but it's an ending none the less.

Thanks for playing and I really hope you enjoyed it.

May all your days be groovy.

I'm now working on version 3 of this mod

I'm now working on version 3 of this mod, expect to see more screenshots in the future.

Version 2 of the mod is releasing this February 1st, I think I might take a short break.

This mod is not dead, production is just slow.

Ever since I released version 1 of my mod I've been doing (essentially) nothing, basically taking a hiatus off this mod for a while to let my brain think...

I plan to release Version 1 of this mod around/on the time of Halloween.

Original and copyright free music for this dead project

If you wanna review this art-house project of mine without angering YouTube's copyright system, replace the songs in the mod folder with these new ones...

This is version 1 of my mod, the splash/menu screen looked weird. I fixed it so it didn't look as odd, you guys can go to the other download of this version...

This is version 1 of my mod, the mod is very short right now but more will come soon in the upcoming versions. Hope you guys enjoy it!

Interesting idea for a mod. I like It! Here's a brief gameplay video I made showcasing a little of what this mod offers! Feel free to use the footage for whatever!

Oh whoa ok man, thanks! I really didn't expect a gameplay vid to be made on it since gameplay is pretty much non-existent.

[V2 Review]
Excelent work. The new "Hub" area beats the old one by all means. It's abstract and more open than the old one. Out of the 4 new levels that have been added, my favourite is definitelly Neon City. It just gives off this weird 90s-esque vibe that I just can't explain. My least favourite was Bright Moon Cottage, as it was just the first level from LSD Dream Emulator, but I'll still let it slide. The new version of The Autumn Forest Trails is good, but it's not as open as the one from V1 and personally I think that the combination of the two [V1 and V2] would make it even better. There was only one problem I had and it was the camera... again. I still just can't understand how this camera works. It still never stops moving and if you won't put the mouse sensivity really low you'll be spinning so fast that It will put the greatest ballet dancers to shame. And just like last time, I had to take a break because of it making me dizzy. Over all it's a great update, but please for the love of god make the camera more normal.

PS: I also would suggest a redesign of "Office Plains" in the next version. It's still kida bland and overall less interesting than the rest of the levels. It doesn't have to be major, just add a thing or two and it should be enough.

That's weird, I thought I fixed the camera? When you go to the mouse sensitivity settings is it turned way up?

I've downloaded the mod to see if I did a mistake somewhere when uploading it but the sensitivity was set to 2.4 by default, so I don't know what to tell you. I appreciate the helpful feedback and criticism and I'll be sure to apply it to version 3 when I start working on it. If anyone is having this same mouse sensitivity problem, please leave a comment/reply if you have the same issue so we can get this thing sorted out. I'm sure it can be fixed by changing the mouse sensitivity in the mouse control options.

this mod is amazing!

I'm glad you like it! I always reply to comments so feel free to ask me anything about the mod! :)

What music is used in the mod? I really liked it

Garden Skies - Voices in my Head by Naked Eyes

The other songs for the Selection Hub and Office Plains were made in a free midi software called OpenMPT. It's very old...

[Im gonna review it here, as there is no proper review opition]
This mod, despite being extremely short and pureley eye candy was just amazing.
The way the maps looked was super abstract and trippy with this strange 80s vibe in some of them was beautifull. The only map that I didn't really like was Office Plains as it was just a office floating in the middle of nowhere but I'll still let it pass.
The only major problem I had with the mod is the camera, ohh the camera. I understand that it was probably supposed to be smooth, but it came to be very disorienting. The camera is WAY too over sensitive with even the smallest mouse movements taking effect on it. Plus, it never stops moving. This camera actually made me dizzy so much that I had to take a small break so my head wouldn't explode. Overall the rest was amazing despite being short. This mod has a ton of potential to become something bigger. 9/10. Would definitely recommend.

Thank you very much for the feedback! The mouse sensitivity though is set so high because of my personal control settings. You do have the option to fix the controls to your preference, but thanks for the acknowledgment. I'll be sure to set everything control wise to default in the future.

And I also mute the audio when testing the maps, so I'm not sure if that carried over to the mod or not. It can be fixed via the audio settings, but I'll be sure to fix that as well.

This mod will be released in multiple versions, with every version adding 4 more maps and some fixes. I heavily encourage feedback on the mod, since this is the first mod I've ever posted to moddb, so I'm still getting the hang of things.

Thanks again for the feedback! And sorry for the dizziness. I'll be sure to add a review option (which I didn't know that was a thing till now so thanks for mentioning it).