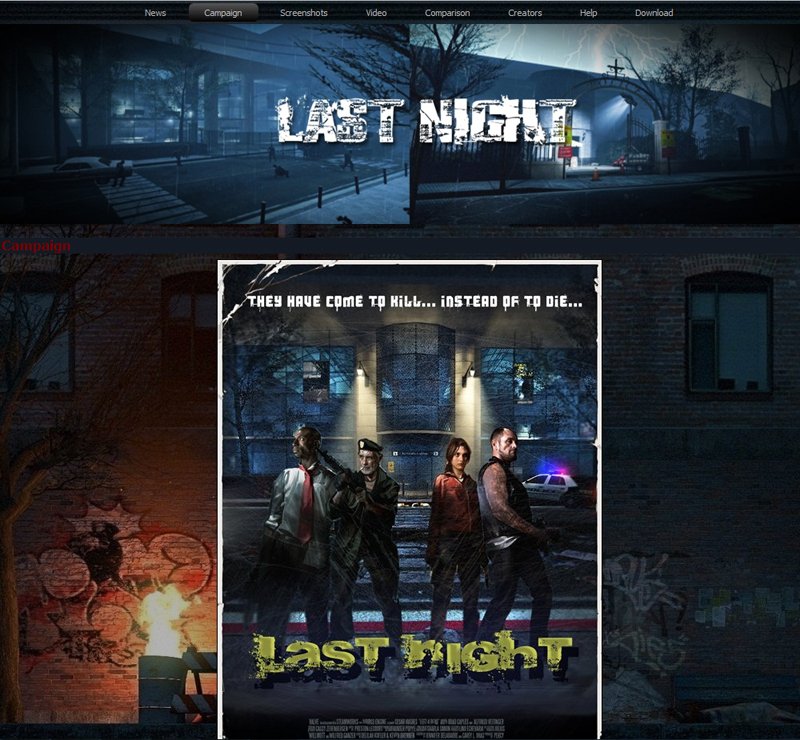 Hi, we've updated our website. Has been a long time since your last update. If you are able to work in one of these programs and want to help us expedite completion, write to us about it! Programms:
1. Hammer
2. Facepooser
3. Photoshop
4. Adobe after effects / Sony Vegas

If yes, please join me in the team to complete the campaign on a qualitative level!Steam - Steamcommunity.comSkype - nightwolfrus Email mr.wolf72yandex.ru
P.S for mappers please throw a reference to previous work / developments even if not in the final state. And the experience in the Hammer for at least 6 months! P.P.S Would not prevent two or three people who have expressed their opinions on a particular place, event and more

Hellow! Last Night - a new high quality campaign for Left 4 Dead. The main focus at the development stage was on atmospheric maps, but we also did not...

In the hope of salvation. Agroup of survivors is coming to the city of Laisves at the point of mass evacuation lastnight-l4d.ru

Couldn't fit this in review. Here are some suggestions. Contains spoilers.

1) After the subway, you climb a ladder onto a broker roof. From there you can jump down the side of the building. I suggest you put a pipe/gutter along with an infected-only-ladder at the point where you drop down, since the infected just ran in circles and could not reach me.

2) In the second level you have medkits, molotovs, and pipebombs in the 4+ amount per model. Meaning there was one medkit model and more then 4 of them usable. I was able to heal myself and all 3 bots plus grab one for myself before leaving the safe room. This happened a lot was made the campaign too easy.

3) Once you reach the sewer system, you were lacking in some proper lighting. The first area you drop down into is not lit at all but contains a lantern, and an env_sprite but no actual light. You should add light here because it changes up the entire dark blue and orange sewer light.

4) Suggest you add a light source at the ladder where you exit the sewer and make the hole wider since infected got stuck in it a lot. Also the light source in/near the exit will help prevent some players from falling down the manhole.

5) Upon dieing in the second map, I respawned in a dev-gray textured room. Had to change the level to fix this.

6) The police station is a bit laggy. I suggest you remove all flashing/flickering lights since they cause low frames. As well make the non-usable minigun obviously broken (angle it down, make smoke coming out from it, something to tell the player “its not gonna work”).

7) Once you go down the elevator shaft, and up the stairs, there is a dark blue light on the wall, it's env_sprite is a few units under it.

8) Upstairs, in the fire, I suggest you remove some of the comp