Kaminoian Rebels: Attack of the Clones

Ep1:
After joining forces with Princess Leia, the Kaminoians supply her with the 15th Arc Battalion. Led by Clone Wars Veteran Captain Rex, these Clone Troops board the Tantive IV in hopes of defending the princess and the stolen Death Star plans. Maybe this time the Empire won't get so lucky.

Know for their ability to completely annulate enemy forces, the 15th Arc Battalion of the New Republic will do anything to end the Empire's rein of terror.

Arc Trooper: Similar to the clone trooper, the Arc Trooper's elite training has resulted in some of the toughest soldiers the Galaxy has ever known. Equipped with a rapid-fire blaster rifle, support blaster pistol, and thermal detonators, this elite unit doesn't think twice before rushing into the heat of battle. Represented by the black paint on their armor, the Arc Trooper will do anything to end the daunting rule of the Empire. 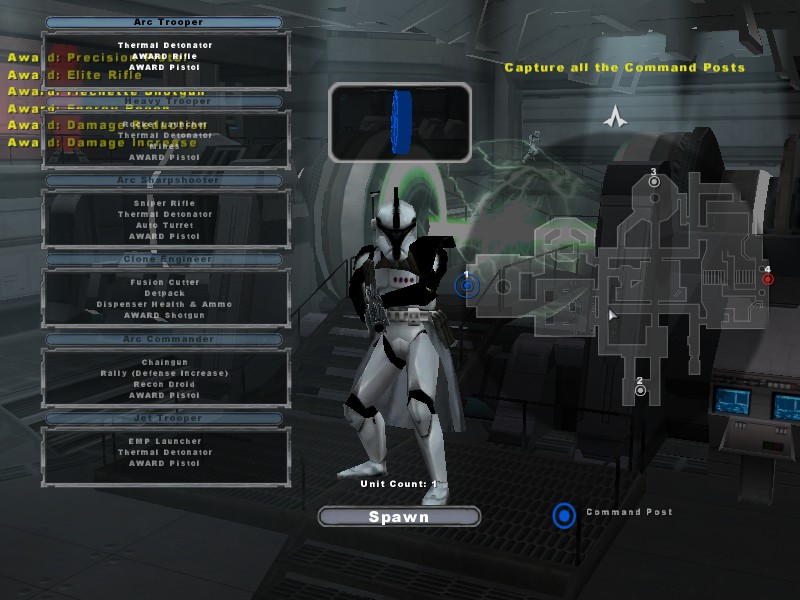 Heavy Trooper: Unfazed by the superiority of Empire weaponry, this fearless solider of the new republic will not hastate to bring Imperial ships, walkers, and speeders to the ground. This unit is so fearless, they wear blue to better notice them on the battle field. Armed with a deadly rocket launcher, a blaster pistol, thermal detonators, and a fierce set of land minds, the Heavy trooper can devastate imperial equipment. 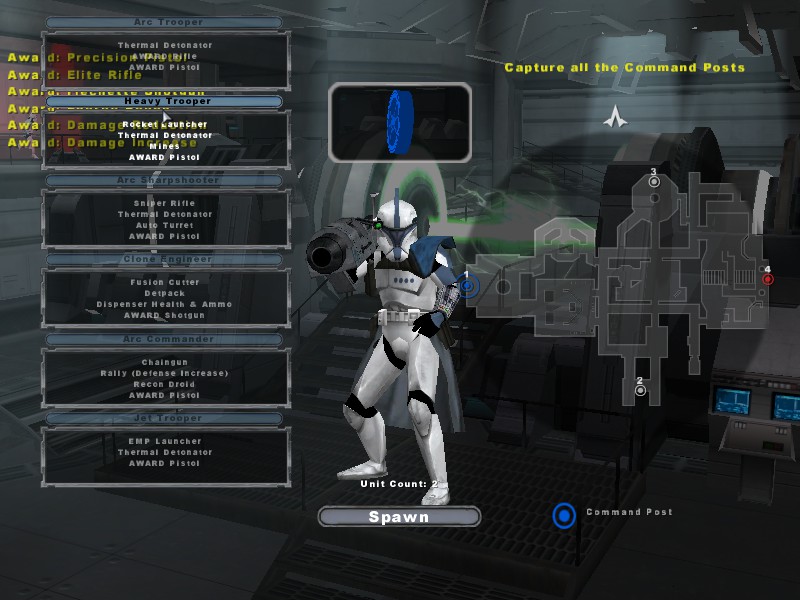 Arc Sharpshooter: Trained to hit fleas of the tops of toothpicks, the Arc Snipers are infamous throughout the empire for their ability to never miss a target. Using custom-made bullets to easily split through stormtrooper's armor. Armed with a merciless sniper rifle, blaster pistol, and rapid-fire auto turret, the Red Arc Snipers will surely bring an end to the empire. 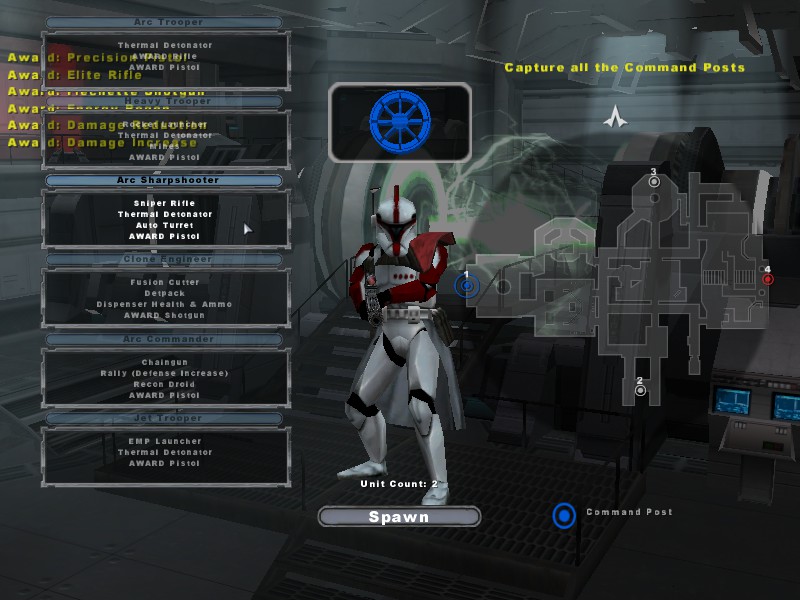 Clone Engineer: Taught by the smartest mechanics in the galaxy, the republic's engineer unit has been known for their ability to build anything one would need on the field of battle. Geared with a powerful blast cannon, fusion cutter, remote control detpacks, and spare bacta canisters, the clone engineer will do anything to insure the survival of the new republic. 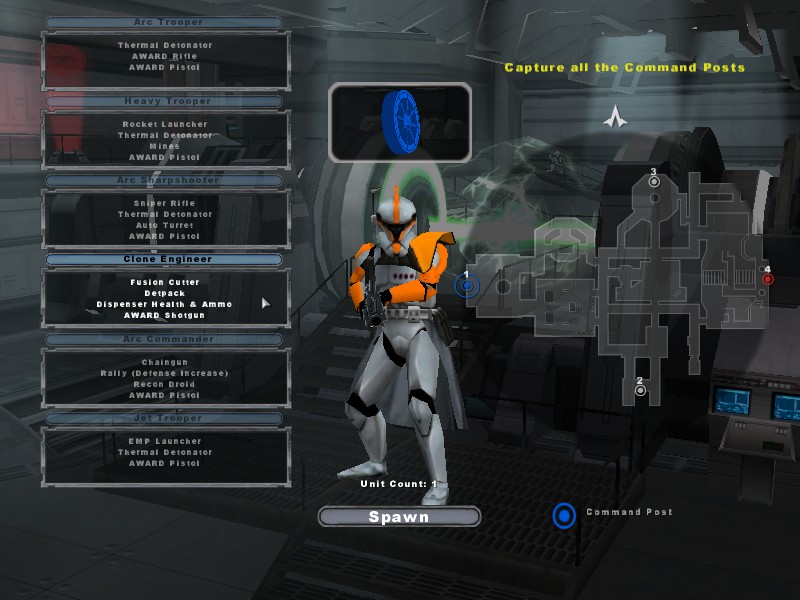 Arc Commander: Know for their unhealthy amounts of courage, the best soldiers the 15th Battalion has to offer led the Arc troopers into battle. Armed with a deadly chain gun, the yellow leaders of the 15th Battalion are somewhat of the blade to the sword that is the new republic. 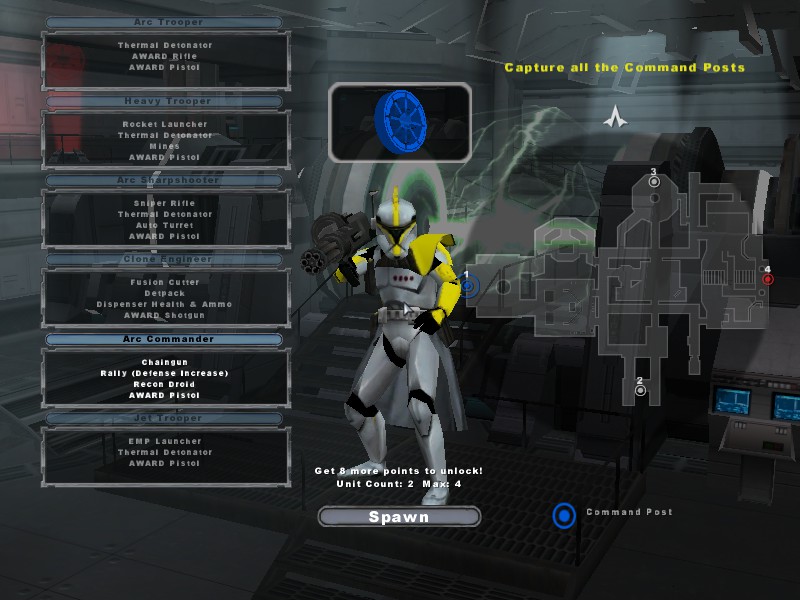 Jet Trooper: Famous for holding the line on Kamino, the airborne troopers proudly serve under Princess Leia's banner. Feared by the Empire for their ruthless EMP launcher and merciless battle strategy, the green troopers of the Jet Legion will fly to the rescue with the Rebellion calls. 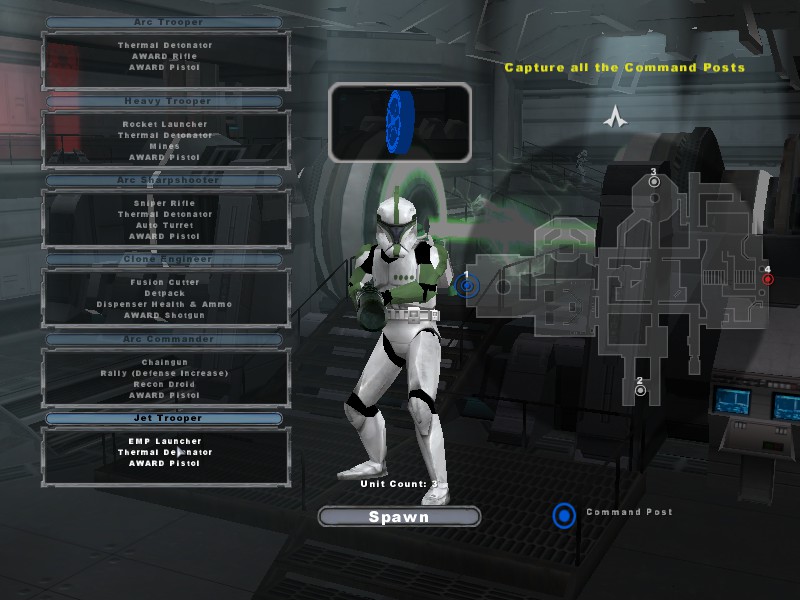 Captain Rex: After commanding the 501st legion of the Galactic Republic for 20 years, Captain Rex resurfaces to led Leia's forces and bring back the Republic he fought so hard to protect. Armed with his famous DC17 Blaster Pistol and Award Shotgun, Captain Rex is determined to led the 15th Arc Battalion to victory. 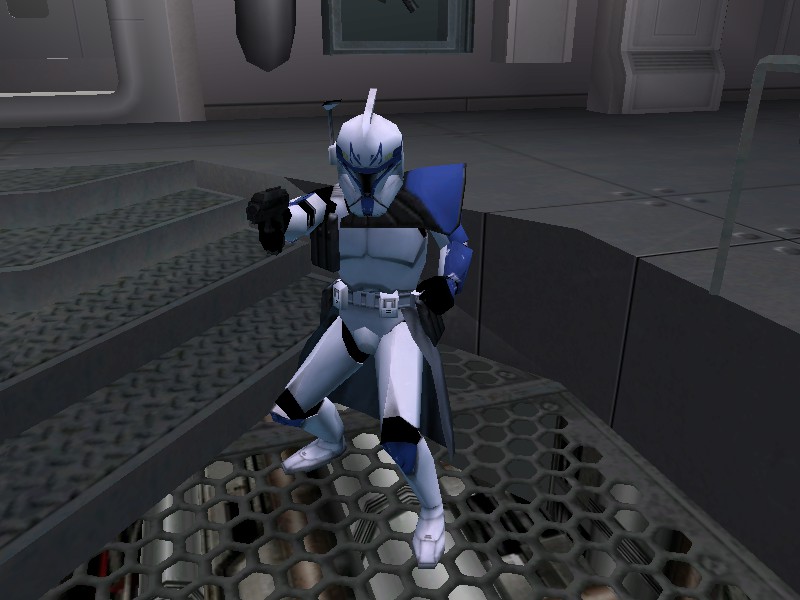 Arc Trooper, Clone Engineer, and Arc Commander Models by me.

I have no Idea where Captain Rex came from. (Juliet gave it to me in a bundle pack) If you have any idea who made this please tell me so I can properly Credit them.

Thanks for voting and helping Kaminoian Rebels: Attack of the Clones on it's quest to become the 2021 Mod of the Year. You are now in with a chance to score some free games from our #modlove collection. Help this mod secure more votes by embedding the widget (or link) we have included below on your favorite sites.

After joining forces with Princess Leia, the Kaminoians supply her with the 15th Arc Battalion. Led by Clone Wars Veteran Captain Rex, these Clone Troops...

The Insignia was my design for those not aware. In a sense I'm throwing some designs out there for them to play around with cause I got nothing else to do XD

I gave you credit in the description of both the file and the mod btw.

This is where the fun begins!

A WWII mod for Star Wars: Battlefront 2. This is aimed to be an authentic, fun WWII experience. This is my first mod so go easy on me..

Era mod for SWBF2 focused on recreating & capturing the feel of the television series "Star Wars: The Clone Wars."

This mod acts similar to a hero assault, but much crazier with a clone wars battle occurring in the background.

This mod will mix Battlefront 2005 and 2004 into one part, what mod will add and change?

This mod is a conquest version of the Champaign Level "Imperial Diplomacy" in which the Empire is brought to Naboo to silence their rebellious queen.

The Aldura Campaign is a map series for Star Wars: Battlefront II, featuring seven new maps, each with its own campaign mode.